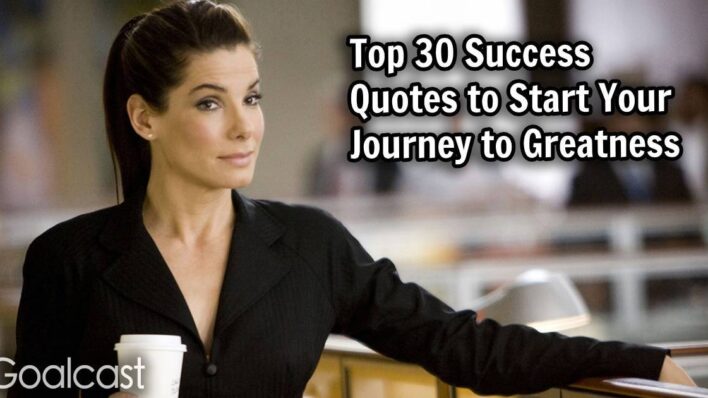 Top 30 Success Quotes to Start Your Journey to Greatness

Need some motivation to push you to the top of your game? Check out our selection of success quotes and start your journey to greatness.
By Flavia Medrut    April 3, 2020

Need some motivation to push you to the top of your game? Check out our selection of success quotes and start your journey to greatness.

There are so many recipes for success out there, and while ingredients may differ according to circumstances, we can all agree that the main ones are hard work and perseverance.

Every successful person has a certain drive, a hunger for success that cannot be appeased until their goal is achieved. Neither failure nor disappointment can stop them from reaching new heights. The following success quotes are a testimony to that.

When they have an idea — no matter how silly or outrageous it may seem — they carefully craft a plan and start working on it, whether others believe in it or not. In a nutshell, this is what sets successful people apart from unsuccessful ones.

It’s usually fear of failure that stops us from dreaming big. You’ll never see fear in the eyes of the greats. They won’t show it even if it’s there. So if you want success, you first need to work on your attitude. As soon as you get the right mindset, you’ll be able to build your steps and find the resources you need to reach your goal.

Here are 30 success quotes to start your journey to greatness:

Success is walking from failure to failure with no loss of enthusiasm.

Don’t be afraid to give up the good to go for the great.

Success is just a war of attrition. Sure, there’s an element of talent you should probably possess. But if you just stick around long enough, eventually something is going to happen.

Success usually comes to those who are too busy to be looking for it.

Success seems to be connected with action. Successful people keep moving. They make mistakes, but they don’t quit.

Success is not the key to happiness. Happiness is the key to success. If you love what you are doing, you will be successful.

A successful man is one who can lay a firm foundation with the bricks that other throw at him.

I strongly believe if you work hard, whatever you want, it will come to you. I know that’s easier said than done but keep trying.

My teacher said to me, ‘If you’re going to fail, fail gloriously.’ I’ve never forgotten it. You learn a lot from your mistakes. You have to take risks and make mistakes. It’s terrifying, but it’s the only way you will learn and improve.

When I thought I couldn’t go on, I forced myself to keep going. My success is based on persistence, not luck.

Success is about making your life a special version of unique that fits who you are — not what other people want you to be.

You can want success all you want, but to get it, you can’t falter. You can’t slip, you can’t sleep. One eye open, for real, and forever.

Achievement happens when we pursue and attain what we want. Success comes when we are in clear pursuit of why we want it.

The successful warrior is the average man, with laser-like focus.

Success means doing the best we can with what we have. Success is the doing, not the getting; in the trying, not the triumph. Success is a personal standard, reaching for the highest that is in us, becoming all that we can be.

Action is the foundational key to all success.

Success is not measured by what you accomplish, but by the opposition you have encountered, and the courage with which you have maintained the struggle against overwhelming odds.

I attribute my success to this: I never gave or took an excuse.

Start where you are. Use what you have. Do what you can.

The distance between insanity and genius is measured only by success.

Success means having the courage, the determination, and the will to become the person you believe you were meant to be.

To succeed in life, you need two things: ignorance and confidence.

The secret of success in life is for a man to be ready for his opportunity when it comes.

For success, attitude is equally as important as ability.

People who succeed have momentum. The more they succeed, the more they want to succeed, and the more they find a way to succeed. Similarly, when someone is failing, the tendency is to get on a downward spiral that can even become a self-fulfilling prophecy.