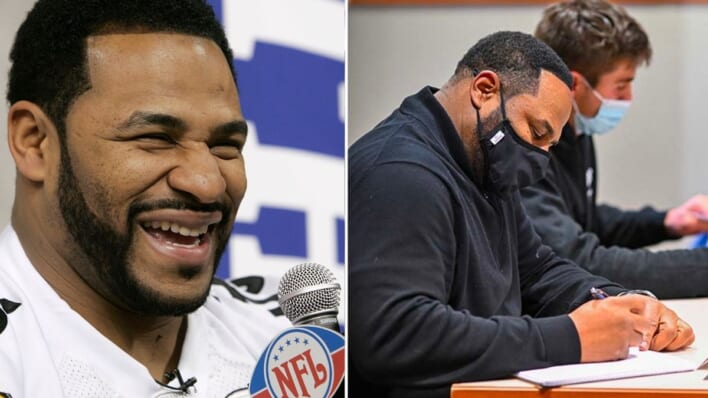 Thirty years ago, Jerome Bettis played his final game as the running back for the University of Notre Dame, but that’s not where his story with the Fighting Irish finished. Hall of Famer Jerome Bettis has returned to his alma mater, now no longer an athlete but just a student.

At age 49, Bettis finally finished his college degree. Eighteen years after retiring from his career with the Los Angeles Rams and Pittsburgh Steelers, Bettis returned to school to fulfill a promise he made to his mother. He had told her he would get his college degree, and now he finally has.

“I promised my mother that I would get my degree,” he said. “In my immediate family, I’ll be the first person to graduate from college. But most importantly, I have two children. For them to see dad finish a commitment that he set out some 27 years ago, for me to complete that, I think it says a lot to them.”

The Journey Back to School Hasn’t Been an Easy One

The age difference between Bettis and his classmates did not go unnoticed. While his peers took notes on iPads, Bettis still used pen and paper. Nearly all of his NFL career came before most his classmates were even born.

“It is so strange,” he told TODAY. “Because I’m so behind the times. I mean, I’m a dinosaur in the sense of school. I don’t know where anything is. I’m struggling with the technology.”

Bettis’s age hasn’t been the only thing that’s made him stand out from his other classmates — Bettis is physically imposing. During his college career, he was nicknamed “The Bus.”

“Everyone kind of knows who ‘The Bus’ is, especially at Notre Dame,” one student said.

Bettis didn’t finish his agree until now because he left school after his junior season to play in the NFL. At that time, Bettis was selected tenth overall in the first rounds by the Rams in 1993.

From a Super Bowl Ring to a Diploma

“I am a much better student at 49 because I want to learn, I want to know all of this information,” he said.

Now that Bettis has graduated, every one of the 21 players from Bettis’s original football class has gotten his degree.

RELATED: Gisele Bündchen’s Feelings on Tom Brady’s Return to Football Reveal the Challenges That Come with a 13-Year Marriage

“I say to all our coaches that there are three things we should be concerned about versus integrity: Do things the right way, second is help these kids get a degree and do well in their lives, and the third is winning on the field,” Notre Dame president Father John Jenkins said on TODAY. “And Jerome getting a degree after all his success just underscores how important that is.”

Though it has taken longer than expected to complete, Bettis is glad he finally crossed the stage at graduation.

“This is education related, and you can never take away the education,” he said.

Slow and Steady Wins the Race