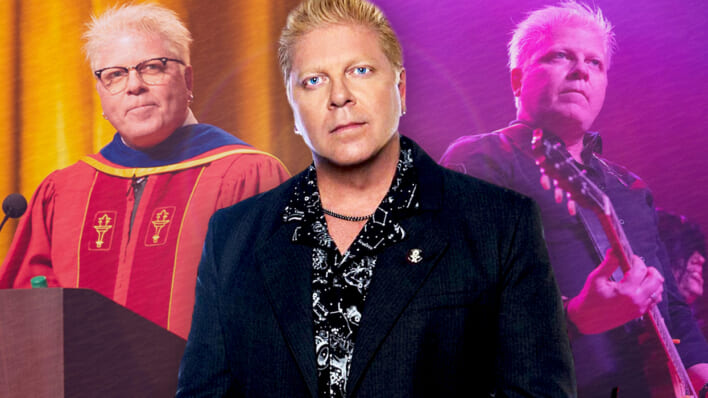 Self Esteem: How The Offspring’s Lead Singer Became a Doctor, a Pilot and an Inspiration

Dexter Holland teaches us that sometimes the best way to strike a “balance” is to do it all.
By Maya Khamala    June 15, 2022

Dexter Holland teaches us that sometimes the best way to strike a “balance” is to do it all.

If you’ve ever been faced with a tough choice between two passions and wondered which you should pursue, Dexter Holland has a lesson for you: just do it all.

Singer Bryan “Dexter” Holland of The Offspring delivered a commencement address at the University of Southern California’s Keck School of Medicine in LA last month, speaking to PhD, MPH and MS graduates in their transition from students to scientists of the world.

RELATED: Kendrick Lamar’s New Song ‘The Heart Part 5’ Is a Heart Wrenching Tribute to the Power of Forgiveness

Known best for his contributions to music, and the skate punk scene in particular, many don’t realize that Holland, The Offsping’s lead man, is a USC PhD graduate himself — one who performed his research at none other than the Keck School of Medicine.

In his commencement speech, he shared some resonant and relevant words of wisdom:

“My story has had both a musical side and a scientific side,” he said. “I had these two great loves, how would I decide? Well, as foolish as it sounds, I decided to pursue both. I believe that there’s an intersection between art and science. And that even in our scientific field we draw upon our creativity.”

“I may be dumb but I’m not a dweeb/I’m just a sucker with no self-esteem.” So go the lyrics to one of The Offspring’s most famous tracks, “Self Esteem,” off their third studio album, Smash, released back in 1994.

And yet, judging from Holland’s track record, he is most certainly not lacking intelligence, and his self-esteem is most assuredly intact. The pressing question, then, is this: just when and how did he decide to go academic? The answer is less of a straight line and more of a woven tapestry.

One thing is clear: it didn’t come out of left field. Holland gave a graduation speech once before—in 1984, when he was dubbed class valedictorian at Pacifica High School in Garden Grove, California, where he was the best student in mathematics in his year.

After high school, Holland enrolled in USC on a scholarship, where he initially started out as a pre-med student.

“I was kind of having a little bit of an identity crisis,” he recalled. “Like, Do I really want to go into medicine? And I was really loving being in the band, but the band seemed so unrealistic. I was not quite committed either way.” Holland switched his major and received a BS in biology in 1988 before forging ahead to earn a Master’s in molecular biology.

But when he began working on his PhD, the success of The Offspring was suddenly on the rise, with Smash steadily climbing the charts in 1994. So he was faced with a major life decision.

So Holland decided. He took a leave of absence from the PhD program. And he didn’t return for another 20 years. But prolonged though this pause may have been, Holland never really ruled it out: “I find math just as exciting as I do punk rock,” he shared in a 1995 interview. “I won’t wanna play music when I’m forty, I’d rather be a professor at a university.”

After two decades devoted to making music, Holland returned to USC and recommenced his research, which focused on HIV. In May of 2017, he published his 183-page thesis.

In a statement released at the time of its publication, Holland said he chose to focus on HIV because 35 million people currently live with the virus and one million people a year die from AIDS-related illnesses.

He expressed hope that he might, “contribute in some small way to the knowledge which has been learned about HIV and AIDS.”

If all that wasn’t enough, Holland is also a licensed pilot. In November 2004, his Cessna touched down on the runway at an LA airport just after he’d completed a 10-day, 25,000-mile solo flight around the world.

To the question, “But why?” Holland simply responded, “I got my pilot’s license back in 1996, and I’ve always wanted to do it. I just like flying airplanes.”

“A lot of times there was nobody else out there,” he added. “I’m one of those guys who writes songs best in my head. I like when there’s a lot of white noise going on. And when you’re in a plane, that’s about all you hear. So being in the plane, I got to start thinking about five songs through. I just had a lot of time to dedicate to introspection.”

Dexter Holland on Finding the “Balance” of Different Careers

While flying around the world in a solo bubble of introspection may have been one way for Dexter Holland to fuel his sense of balance in the world, life for him is largely about striking a balance between his two main passions: art and science.

In nature there are no straight lines, he reminded the roomful of graduating doctors.

“I’ve learned that life isn’t always a straight line from one place to another,” he said. “I’ve always believed that education is incredibly important, and my life took me from education, to a career in rock n’ roll, and back to education. Nowadays I’m splitting my time between the two. Finding balance in life is an important lesson for me.”

“You did it,” Holland circled back to his audience. “…and you did it at a time when many people have lost their faith in science, and trust in the scientific community as a whole has been challenged…Today we will celebrate what generations will remember as the class that did the impossible.”

Now that Holland’s PhD is complete and helping him land speaking gigs at commencement addresses, his life is happily even less of a straight line than it was before, especially since fans of The Offspring will be delighted to note that he’s still touring. The band released their 10th studio album, Let the Bad Times Roll, in 2021, and there’s surely more to come.