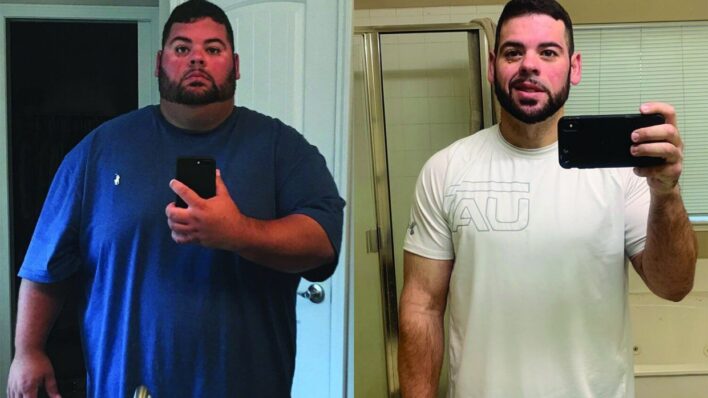 Dad Beats Food Addiction, Loses 191 Pounds to Be Present for His Family

Angel Diaz didn’t think he’d ever be able to overcome his food addiction but with determination and exercise, he was able to get healthier.
By MJ Kelly    October 4, 2019

Angel Diaz didn’t think he’d ever be able to overcome his food addiction but with determination and exercise, he was able to get healthier.

Angel Diaz didn’t think he’d ever be able to overcome his food addiction until a friend asked him if he was considering bariatric surgery.

“The fact that he was worried about my weight and health was an eye-opener that my situation was probably worse than I thought,” Diaz told Yahoo.

“Ultimately though, I knew I didn’t want to die early and miss out on the lives of my two kids and leave my wife to raise them alone,” he said.

Diaz struggled with his weight for most of his life and was always self-conscious about the way he looked as a kid.

By the time he turned 18, Diaz weighed 325 pounds and decided it was time to give weight loss a try.

Over a six-month period, he lost 125 pounds by making changes to his diet and through exercise, only to regain it back, and then some.

The more weight he gained, the more unhappy he felt

“I was a very negative person. I felt as though I was stuck, helpless, and hopeless,” Diaz remembered.

When his friend voiced concern over his health, Diaz didn’t feel ready for surgical intervention, but he did feel ready to give natural weight loss one last try.

“So, we made a deal. If I couldn’t lose 100 pounds naturally in a year, I would start to seriously consider surgery,” said Diaz.

The fear of leaving his family behind drove him to jumpstart his weight loss journey by completely overhauling his diet.

“I knew for me to be successful, I would have to eliminate all unhealthy food,” he said.

Diaz focused his efforts on tracking his calories, cutting out all added sugar and artificial sweeteners from his diet and counting macros.

Within weeks, he started to notice his energy levels improve.

“After the first month, I realized that I actually was going to lose the weight this time. It was just a matter of waiting for time to pass.”

Two months into his transformation, Diaz began incorporating exercise into his routine by going out for jogs.

“The first night I jogged 0.19 miles and thought I was going to die,” he remembered.

“The next night, however, I went back out there and ran a little farther. The following night I did the same — until eventually I ran 1 mile without stopping.”

After losing 88 pounds and despite his anxiety of being overweight and out of shape, Diaz pushed outside of his comfort zone even more by signing up for a gym membership.

“As soon as I started in the gym I began looking forward to going every day and really enjoyed strength training. I’ve been going to the gym, consistently strength training and running, five to six days a week since June 2018.”

It was all worth it in the end

Since the beginning of his weight loss journey, Diaz has lost 191 pounds and feels better than ever.

His sleep apnea and high blood pressure have been reversed, he can run 1 mile in under 7 minutes and is able to lift weights heavier than he ever thought possible.

For Diaz, the mental and emotional changes are the most rewarding.

“Since losing the weight, my mentality has completely changed. I feel as though I have a new lease on life,” said Diaz.

“I am a more positive person: I wake up happy, I go to sleep happy, I’m a better father, a better husband, and just overall a better person.”