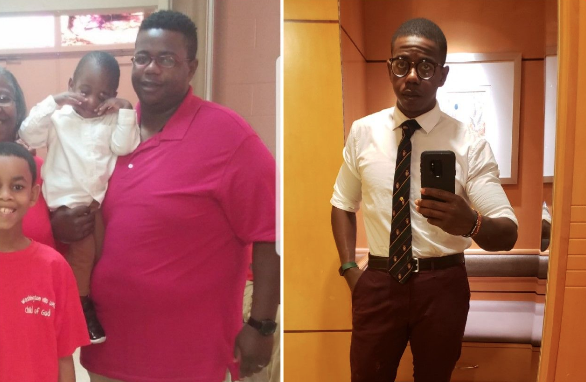 This Man Lost Nearly 150 Pounds Through Discipline and Healthy Addiction

Ian Sullivan was overweight for years, but it wasn’t until he was diagnosed as pre-diabetic that he realized it was time to prioritize his health.
By MJ Kelly    September 23, 2019

Ian Sullivan was overweight for years, but it wasn’t until he was diagnosed as pre-diabetic that he realized it was time to prioritize his health.

Ian Sullivan was miserable and overweight for years, but it wasn’t until he was diagnosed as pre-diabetic that he realized it was time to make his wellbeing a priority.

His lifestyle was slowly eating away at him. Sullivan worked four jobs and relied on fast food and soda to get himself through the day. He was hardly ever home, he rarely spent any time with his wife and by the time he did get home, he was completely worn out.

In fact, he was lucky to even make it home, as he often found himself nodding off at the wheel after a long day.

A visit to the doctor changed everything

During a checkup, Sullivan’s doctor informed him that he was pre-diabetic and advised him to lose 20 pounds by the end of the year — 2015. It was October at the time, and he weighed 320 pounds.

The idea of tackling weight loss was daunting. He couldn’t lose the weight, and to make matters worse, he lost his job.

A blessing in disguise

It wasn’t long before he found work in a factory and set on a weight loss journey that transformed his life.

“It was a blessing in disguise,” Sullivan told Men’s Health. “This was where my weight loss journey began; I made the decision never to exceed 300 pounds.”

He set himself a small goal: to lose 2-3 pounds each week

He admitted being too restrictive with his diet at first, which he now realizes was driven by fear, and the limitations he was imposing on himself were not sustainable.

So, with his wife help, he came up with a plan by determining what his ideal diet was: oatmeal and yogurt for breakfast, chicken with jasmine rice and a side of vegetables for both lunch and dinner. For snacks, he only ate fruit, granola bars or rice cakes, and they all had to be eaten before 4 p.m.

“I’m a creature of habit so I literally ate this same combination for multiple years since it was working,” said Sullivan.

He admitted it wasn’t always easy to be consistent and mindful at all times.

“I had to build discipline to turn down foods and be strict. I always would say my lunch box saved my life. I would carry it everywhere to ensure I didn’t make mistakes.”

After mastering his new diet, Sullivan decided it was time to hit the gym. He wasn’t achieving the results he wanted with cardio and strength training, so he decided to join a group bootcamp at work – and it was a smart decision.

Not only was he losing weight, he started to enjoy the bootcamp’s HIIT training so much that it was turning into an addiction.

He’d wake up at 4:30 a.m. to work out, so he could return home and spend time with his family before heading to work. It was challenging at times but establishing this new routine helped him build up his drive and discipline.

The greatest achievement of all

Since the start of his transformation journey, Sullivan has lost nearly 150 pounds. His energy levels have increased, his mood has improved, and his self-esteem is better than it’s ever been.

For Sullivan, the greatest achievement is being able to spend more quality time with his family.

“My relationship with my wife is better than ever,” he said. “I have two kids that I can be present and active with. These things I couldn’t imagine would happen four years ago at 320 pounds.”