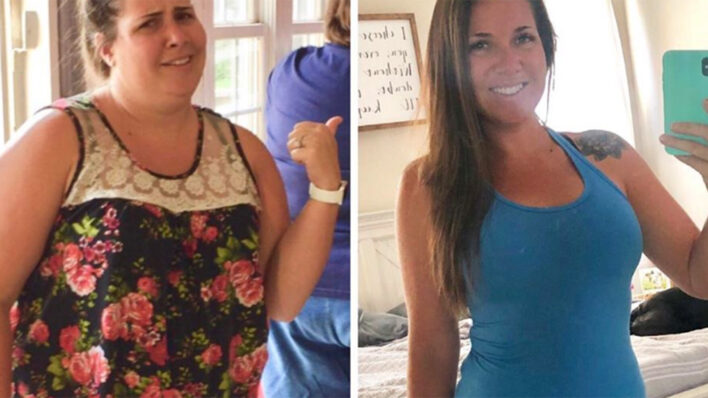 She Lost 100 Pounds in One Year by Discovering Her Willpower

After losing 30 pounds, Jenny was able to conceive and gave birth to her daughter. The problem was, she wasn’t able to lose the baby weight.
By MJ Kelly    August 23, 2019

After losing 30 pounds, Jenny was able to conceive and gave birth to her daughter. The problem was, she wasn’t able to lose the baby weight.

When Jenny Wagner caught a glimpse of a photo someone took of her on New Year’s Eve 2018, she was shocked.

“I had gotten to the point where I absolutely loathed seeing my reflection,” the 30-year-old told TODAY. “I still felt like a thin athletic girl. Then I would see a candid picture of me and I saw what I looked like.”

At 240 pounds, she knew something had to change

Jenny had been athletic for most of her life but after she got married in her early 20s, she started to gain weight.

Around the same time, she was diagnosed with polycystic ovarian syndrome (PCOS) and was prescribed medication to treat it. Doctors also recommended she lose weight, but offered no solutions as to how.

Earlier in her marriage, she had struggled to get pregnant

After losing 30 pounds, Jenny was able to conceive and gave birth to her daughter. The problem was, she wasn’t able to lose the baby weight — she’d experimented with different diets but nothing stuck.

“After three years of denying my weight I realized this is what I looked like and this isn’t what I wanted to be,” she said.

Determined to get back into shape

Jenny and her husband, Nathan, decided to give the ketogenic diet a try. Combining that with intermittent fasting, she was able to lose 15 pounds over the span of a month.

Jenny was able to stick with the keto diet and lost over 80 pounds in the following nine months. While she enjoyed eating low-carb, she began slowly making tweaks to her diet to make it more sustainable in the long run.

“To lose the last 20 pounds I transitioned to calorie counting,” said Jenny. “I was absolutely terrified that by allowing carbs back into my diet that I was going to gain back so much of that weight I lost.”

Jenny stuck with intermittent fasting and portion control, and continued to lose weight while being able to enjoy some of her favorite foods like pasta and bread.

She was able to lose an extra 20 pounds, and once she made it to 50, she began exercising for about 30 minutes every day.

“I was doing was mostly just cardio,” she said. “The muscles started popping out.”

She reached her goal of losing 100 pounds

Jenny then underwent surgical procedures to remove the loose skin on her stomach. “I don’t want women to think loose skin is bad,” she said. “I just knew it wasn’t for me. I wasn’t even 30 yet. I didn’t want to keep stuffing my loose skin into my clothes.”

Today, Jenny continues to count her calories to keep the weight off and is proud of she’s been able to achieve.

“I am surprised how much willpower I had,” she said. “I didn’t know I could be so strict.”