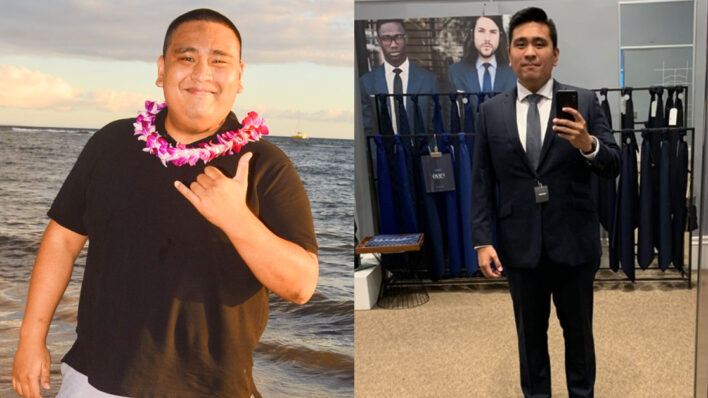 Jake Patricio began his weight loss transformation after stepping on an industrial scale at work one day to find he weighed 349 pounds.
By MJ Kelly    September 3, 2019

Jake Patricio began his weight loss transformation after stepping on an industrial scale at work one day to find he weighed 349 pounds.

Jake Patricio began his weight loss transformation after stepping on an industrial scale at work one day to find he weighed 349 pounds.

Shocked by the number on the scale, he realized how out of control he had let his weight get and found the motivation to change his lifestyle.

“I was just upset with myself for getting to this size and being so unhappy,” Patricio told Men’s Health. “I wanted to fix it.”

Patricio had been in shape and played sports for most of his life, but after he graduated college, things started to change when his focus became his career.

He quickly settled into a sedentary lifestyle

Patricio spent most of his time at work or at home, but his eating habits stayed the same.

He kept eating like a college athlete and his weight crept up over the years.

Doing simple tasks like climbing a flight of stairs became difficult and as his social interactions became fewer, Patricio’s mental health took a hit too.

After realizing how bad things had gotten, he was initially angry at himself but instead of beating himself up, he used his anger as a motivating force to lose weight.

Patricio’s plan was to change what he ate and what he ate, so he began a three-phase diet transformation.

During phase 1, he stuck to a strict keto diet. In phase 2, he switched to intermittent fasting and low-carb diet, and his efforts were paying off. Finally, in phase 3, he followed a low-carb 1,800 calorie diet

“I kept telling myself I would only see results if I did what I could to stick to my plan,” said Patricio.

And, he did. He started working out again, hitting the gym three days a week, and as his strength came back he started incorporating cardio into his exercise routine.

“I realized I stayed in shape in college because I played a team sport,” he said.

Not long after, he started practicing with a local rugby team, which provided him with more steady cardio.

The new activity was challenging, but he kept pushing forward.

“Consistency is hard. There were days after work where I wanted to just lie in bed and sleep. There were also nights where I would lay in bed hungry,” said Patricio.

“The only thing that kept me going was knowing I would only see results if I stuck to it.”

Without a specific target weight in mind, all Patricio wanted was to get back into shape. Four months into his transformation, he went down a size in his belt, and then, another.

With every milestone, his confidence improved

“Mentally I feel much better and positive overall,” he says. “Physically I am less fatigued, and my strength has increased. I feel happier, I look better, but most importantly: I’m not done yet!”