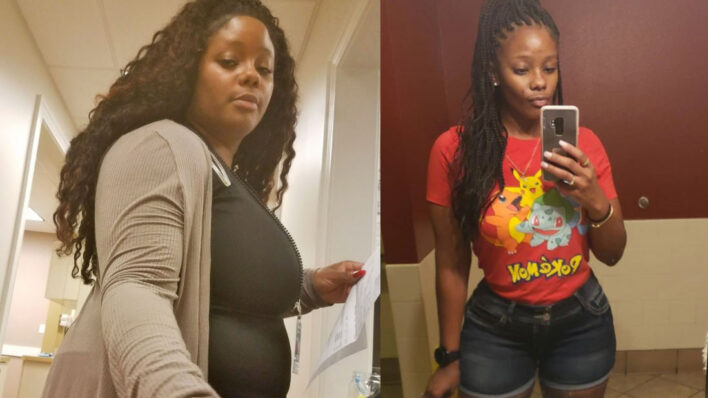 Alisia McKennon had never made weight loss a priority, even as she struggled to keep up with her toddler. A health scare changed everything.
By MJ Kelly    September 10, 2019

Alisia McKennon had never made weight loss a priority, even as she struggled to keep up with her toddler. A health scare changed everything.

Alisia McKennon had never made weight loss a priority, even as she struggled to keep up with her toddler.

Her weight prevented from her realizing a longtime dream, but even then, she kept postponing weight loss.

It wasn’t until she had a health scare that she found her the motivation she needed to make a change.

Growing up, McKennon was “always kind of curvy”

After having her first child, she wasn’t able to lose the pregnancy weight and kept getting bigger.

“With my son, actually I only gained about 20 lbs. during my pregnancy. But after, I gained 60 lbs.,” McKennon, 31, told PEOPLE. “I never stopped eating like I was pregnant. I just couldn’t get out of it.”

As McKennon’s son got older and more active, it got harder for her to play with him.

“I would be so out of breath trying to run around and catch him,” said the 31-year-old.

“He’s very spunky, like most little boys, and I felt really bad that I couldn’t keep up with him. I would tell him, ‘Oh, it’s too hot outside, let’s go back inside,’ just because I was tired.”

Sometimes I would cry about it and wonder, why did I do this to myself? Why did I get this big?

Her dream was out of reach

McKennon’s weight was also getting in the way of her accomplishing her long held dream of military service.

“I’ve always wanted to join the Army, and for my height, you have to be 158 lbs. to start basic training,” she said.

That still wasn’t enough to motivate her to lose weight. Nothing was — until a routine visit to the doctor’s office in December 2016 changed everything.

I started to realize that my neck was getting darker, almost black

“At my annual checkup, my doctor told me I now had high cholesterol, I’m possibly pre-diabetic and the black stuff that was growing on my neck was an early sign of diabetes. That woke me up.”

She quickly made up her mind

“I’m a Southern girl, so I love my biscuits and rice, and with WW I can have that, but in moderation,” said McKennon. “It was great because I had some good weeks, some bad weeks, but they always met in the middle, and I met my goal.”

It wasn’t always easy, but she used the difficult moments to motivate her to keep reaching for her goal.

“One time I literally cried in my car because I wanted a cupcake so bad,” she says. “I said I’m not going to get it, I’m going to do good. And I felt extremely proud of myself, because I finally didn’t give in.”

Once she began to lose weight, she started building a new fitness routine. McKennon began by walking on the treadmill before upgraded to interval running.

“I knew I was going to have to run in the military, so I built up my training to the point where now, I can run four or five miles a day and it’s nothing,” she said. “I treated working out like a part time job — my actual work schedule was from 8 a.m. to 5 p.m., and by 6 I had to be in the gym.”

A little over a year after she started her transformation journey, McKennon reached her goal weight: 158 lbs.

“That’s when I joined the military,” she says. “I weighed in and got processed through, and I was like, ‘Oh my god, I did it.”

She went through a two-and-a-half month-long basic training and now works as a paralegal specialist in the army.

“I feel so good, better than I could’ve imagined,” said McKennon. “If you asked me before, I would have never guessed that I would be at this point. I had some really, really dark times, and thought that this would just be my life.”

“Now I’m happy. I can keep up with my son, he’s six years old now and we run together — it’s a really good feeling to be here.”