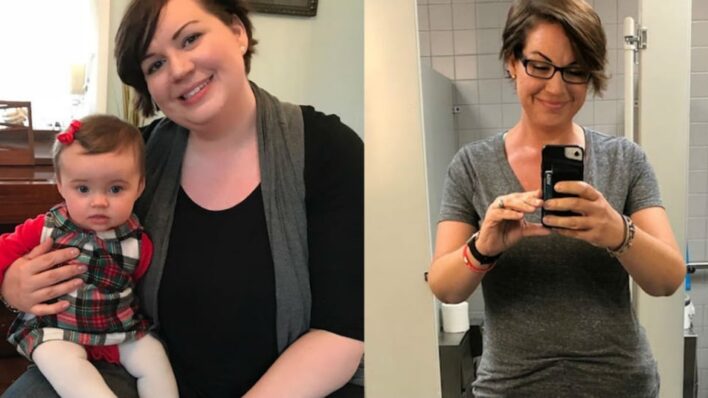 This Woman Lost 108 Pounds After Surviving a Heart Attack

After Kate Adams survived a heart attack and began cardiac rehabilitation, she quickly realized it was time to make lasting change.
By MJ Kelly    August 12, 2019

After Kate Adams survived a heart attack and began cardiac rehabilitation, she quickly realized it was time to make lasting change.

After Kate Adams survived a heart attack and began cardiac rehabilitation, she quickly realized it was time to make lasting change.

“It kind of dawned on me that pretty much all I was doing was working and then coming home and lying down. I was just sore and tired, and it wasn’t the life I wanted for myself,” Kate told POPSUGAR.

“I wanted to be the healthiest, happiest version of me for myself and my family. So that’s what got me started, focusing on what I can do to feel good instead of on fear and what I can’t do.”

Kate was only 27 years old when she experienced two transient ischemic attacks (TIAs). Coloquially referred to as “mini-strokes”, TIAs are often the early warning signs of a potential full-blown stroke.

Kate later found out that the heart attack she had was caused by fibromuscular dysplasia (FMD), a previously undetected disease that she’d actually been living with for years.

At her heaviest, Kate weighed 289 pounds and it was during her recovery that she found the motivation to begin her weight loss journey.

Initially, Kate experimented with a plant-based diet and was able to lose 40 pounds but it didn’t take long for her to realize it wasn’t the right fit.

“I couldn’t get the balance right, and I was tired all the time and hungry all the time,” she said.

“If the kids are going to have pizza, then I’ll make myself fish in the air fryer and some steamed veggies instead of eating what they’re eating,” Kate said.

Once she felt comfortable with her new dietary choices, Kate was ready to incorporate exercise into her daily routine.

Kate then graduated to jogging and eventually turned to YouTube for strength training workouts. She was able to lose an extra 68 pounds.

Throughout her transformation, she’s learned to be in tune with her body and not push herself too hard.

In total, she lost 108 pounds in less than two years

“I’ve kept going because I do it for more reasons than just losing weight,” she said. “I sleep better, I have more energy, and my mood is better.”

The biggest motivator for the now 38-year-old mother of four is that she can keep up with her children with more ease and “to be the kind of mom that my parents were. I can go outside and play in the pool and play soccer. I rollerblade with my girls. I can do so much more than when I was overweight and not physically fit.”

Today, her goals are to lose an extra 20 pounds and to keep challenging herself

She’s signed up to run a 5K this Fall and is determined to help other women with similar heart conditions rebuild their confidence.

Kate started a Facebook group — Healthy Hens, with the intention of bringing heart attack survivors together, to help and support each other during their recoveries.

“I want them to move beyond that and focus on just feeling good and doing what they can do for themselves,” she said.

Having experienced it herself, she knows how hard it can be to move forward after a life-changing event. Kate’s mission is to try and help women gain new perspectives.

“The only thing that I’ve kind of figured out for myself is how to learn to live with the fear,” Kate said.

“It’s impossible to survive something traumatic, whether that’s cancer or heart disease or whatever, and to be ‘fearless.’ So I try to focus on fearing less instead of being fearless.”