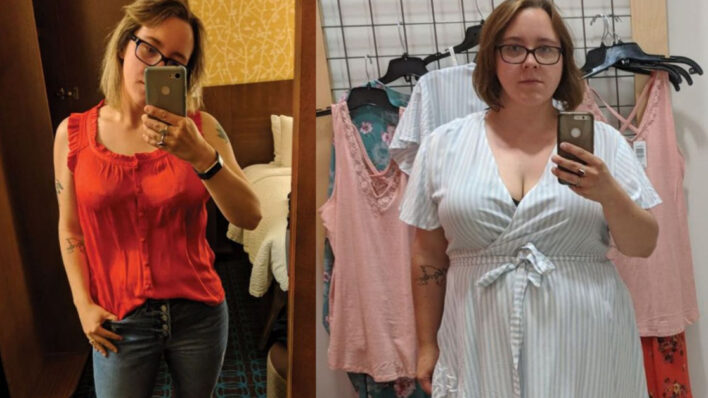 Her Motivation to Lose 100 Pounds Came From an Unexpected Place

Marissa Schillaci-Kayton struggled to find the motivation to take charge of her own health and fitness, until she found an unexpected support community.
By MJ Kelly    October 15, 2019

Marissa Schillaci-Kayton struggled to find the motivation to take charge of her own health and fitness, until she found an unexpected support community.

Marissa Schillaci-Kayton had always struggled with her weight, but after it started having a negative impact on her health, she decided it was time to make a change.

“Somewhere in my late 20s, I really lost my way and completely failed at taking care of my health,” Marissa told Yahoo.

“I went from a highly active job that I biked to every day to an office job that required me to drive,” she said.

Her unhappiness dragged her down

Between her work and graduate school, Marissa encountered a lot of stress and stopped taking care of herself.

“I stopped engaging in activities that I once loved because they felt too tiring, my insomnia was out of control and I always felt like I was waiting for things to get a little worse,” she remembered.

As Marissa grew increasingly unhappy with how she looked and felt, she knew it was time to give weight loss another try.

“I spent a significant amount of time doing research and thinking about the best approach for me,” said Marissa.

She found her motivation online

She turned to the internet and found both information and inspiration on the “progress pics” subReddit.

“I saw people succeeding at what had felt so insurmountable to me, some of whom started with higher mountains to climb,” said Marissa.

While many of the transformations often took more than a year to complete, seeing a lot of people make progress in just a few months helped her stay motivated early on in her journey.

The baby steps that grew bigger

Marissa started off by taking walks and counting her calories. She struggled to become more active at first, but made a deal with herself to walk 30 minutes a day, three days a week. Eventually, they become longer and more habitual.

As she lost weight and built up her endurance, she started doing more activities like hiking, Zumba and a running program.

She eventually joined a gym and a good friend taught her how lift weights.

At first, I had to take inventory of the internal changes, because the external stuff takes a bit of time.

“Because I was more active, I started to sleep better. I had more energy, my mood was better, I wasn’t struggling with issues like migraines as much.”

Seeing her hard work pay off motivated her to keep going and her transformation inspired some of the people in her life to start their own weight loss journeys.

How she motivated others

“It stopped just being me on a journey, but rather a collective ‘us’ of important people in my life, all working on our health,” she said.

Then Marissa suffered an ankle injury that needed surgery. As difficult as it was for her to rest throughout the healing process, it gave her an opportunity to reflect on how much she’d taken her health for granted for most of her life.

“I spent time thinking about how much of my life I had spent in front of the television, and how there are some people who do not leave their house at all because of their health,” Marissa said.

“I decided I didn’t want those things for my life and did everything in my power to ensure that I spent as much time as possible being active out in the world,” she continued.

Marissa was able to lose 100 pounds since she started her journey and continues to make her health a priority, so she can be the best version of herself.

“My husband, my family and my friends — all deserve the best version of me. They deserve to spend time with my happiest, healthiest and most confident self,” she said.

“They deserve to live in a world where my health and well-being is not something they have to worry about.”