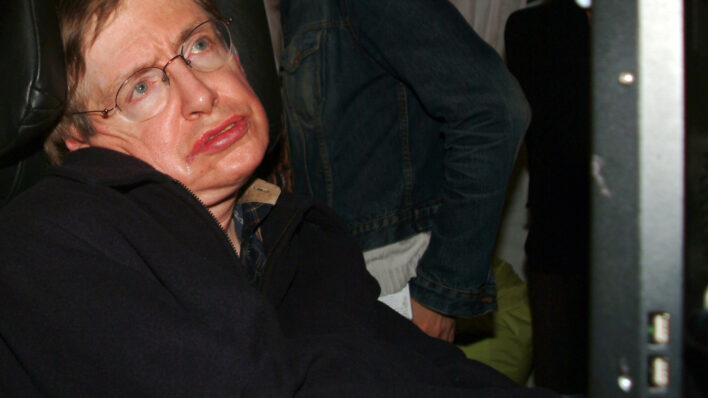 Undoubtedly one of the most recognized and respected scientists of our time, Stephen Hawking has touched millions around the world
By Eliza Theiss    March 15, 2018

Undoubtedly one of the most recognized and respected scientists of our time, Stephen Hawking has touched millions around the world with his singularly brilliant mind, defiance of a debilitating disease, and inspirational approach to life and happiness.

His death shook the world, as despite his advanced age, it almost felt inconceivable that such a brilliant mind could cease to exist.

As news of his passing broke, social media was flooded by tribute after tribute, with posts celebrating his groundbreaking work, bravery, sense of humor, intelligence, and love of life.

“It is such a simple image with a compelling message. One planet. One human race.” RIP Stephen Hawking. May you continue to inspire through curiosity, knowledge, and wisdom. pic.twitter.com/sLVHm7nJ71

Sad to hear another childhood hero of mine has moved on. Thanks for inspiring me along with millions of youngsters and students, showing us that physics & sciences are the opposite of boring! You will continue to be aboard with us, on all those future space exploration missions! https://t.co/qzy4HWIjkb

‘It would not be much of a universe if it wasn’t home to the people you love’ – that’s a wonderful ‘theory of everything’ in its own merit. RIP Professor Hawking.

Diagnosed with the debilitating amyotrophic lateral sclerosis (ALS) disease at the age of 21, Hawking defied doctors’ prognoses, refusing to be overcome by his condition, even as his body continued to degrade.

Devoted to understanding the workings of the universe, of time, space, and even the divine, Hawking went on to define some of the most groundbreaking scientific theories not only of our time, but also of the past centuries.

His life story inspired the 2014 Oscar-winning biopic The Theory of Everything. His joie de vivre inspired countless memes and guest appearances on iconic shows such as the Simpsons.

First published in 1988, his book, A Brief History of Time, became an instant bestseller, selling over 10 million copies in the past 20 years in over 30 languages. Hawking’s effortless breakdown of complex notions such as quantum mechanics and general relativity to the average reader transformed him into a pop-culture fixture.

Let us take a moment to remember and celebrate a life that created and gave more than most of us could ever dream of. Rest in peace, Stephen Hawking — you will be sorely missed and fondly remembered.

Check out the touching tributes below and get ready to grab some tissues:

Remembering Stephen Hawking, a renowned physicist and ambassador of science. His theories unlocked a universe of possibilities that we & the world are exploring. May you keep flying like superman in microgravity, as you said to astronauts on @Space_Station in 2014 pic.twitter.com/FeR4fd2zZ5

His passing has left an intellectual vacuum in his wake. But it’s not empty. Think of it as a kind of vacuum energy permeating the fabric of spacetime that defies measure. Stephen Hawking, RIP 1942-2018. pic.twitter.com/nAanMySqkt

one of my favorite things about stephen hawking is that he was mean to all the right people pic.twitter.com/7jd3vLp5ql

Professor Stephen Hawking was an outstanding scientist and academic. His grit and tenacity inspired people all over the world. His demise is anguishing. Professor Hawking’s pioneering work made our world a better place. May his soul rest in peace.

We were on earth at the same time as Stephen Hawking.

That’s kind of a miraculous thing.

We breathed the same air as the man who demystified the stars.

Remembering Stephen Hawking, a friend of @UNESCO, interpreter of the universe & advocate for ICT’s for people with disabilities.

His star will forever shine brightly in the Universe. pic.twitter.com/N9EaUdnQgC

In loving memory of Stephen Hawking. It was an honor to have him on The #BigBangTheory. Thank you for inspiring us and the world. pic.twitter.com/9rWoYqIToy

.@TheSimpsons RIP Stephen Hawking. A sense of humor as vast as the universe. pic.twitter.com/528kWRhfVR

there’s a big black hole in my heart hours before Pi day. Rest In Peace @Steven_Hawking… See you in the next ❤