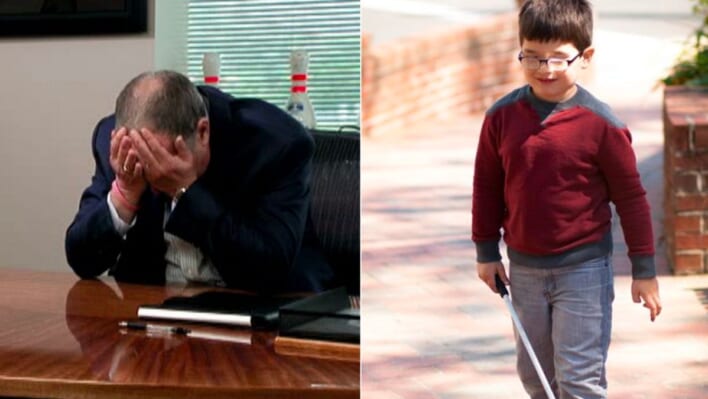 During a heartwarming episode of “Undercover Boss,” a CEO helped change the life of a hardworking employee and his special needs son.
By Ty Jay    November 8, 2022

During a heartwarming episode of “Undercover Boss,” a CEO helped change the life of a hardworking employee and his special needs son.

An employee at a popular American bowling alley chain used his hardworking mentality and good ethics to get the attention of the business’s CEO.

With some help from the CBS television show, “Undercover Boss.”

Jermaine, an employee at a Lucky Strike in Houston, was describing his work life and some personal information about his special needs son to who he thought was a new coworker — it turned out he was actually the CEO of the entire nationwide Lucky Strike company.

What happened next would change Jermaine’s life.

Lucky Strike CEO Steven Foster donned a wig and a bowling alley employee uniform while going undercover as “Aaron,” on an episode of “Undercover Boss.”

For those unaware, “Undercover Boss” is a show that follows bosses of chain businesses who go to their own stores as different jobs to see how their employees naturally act. In most cases in the series, the undercover assignment shows the CEOs how much the job actually means to them.

That was certainly the case for Jermaine.

While undercover, “Aaron” felt a connection to Jermaine who not only had great ideas for the Lucky Strike brand but who was working hard to provide for his special needs son, who was born blind.

Jermaine — a graphic designer by trade — had only been working at Lucky Strike for six months, mostly because money was short as a designer.

He couldn’t afford to provide for his son without work so he took a job at his local Lucky Strike and said he “liked the energy and the place,” so he thought ahead. While speaking with the CEO, who Jermaine thought was a regular employee named Aaron, the young father shared ideas about how to make Lucky Strike better for customers.

Enamoured by Jermaine’s optimism, Foster revealed told Jermaine that his “positivity is unbelievable.” He then revealed that he was actually the bowling alley chain’s CEO and decided to recruit Jermaine to his special training team to coach new Lucky Strike employees.

He also offered Jermaine a spot with the brand’s design team and told him he’d use his ideas for new Lucky Strike tee shirts.

What’s more, Foster told Jermaine a percentage of the tee shirt sales would be made into a find to help his blind four-year-old son.

During the episode, Foster broke down and started to cry. “You get moments like this in life that are turning points — that’s this,” he said through tears.

Jermaine also started to get emotional and got up to hug the CEO.

Do you see? You never know where the proper work ethic might take you and you might want to keep your head up — your boss could always be watching.