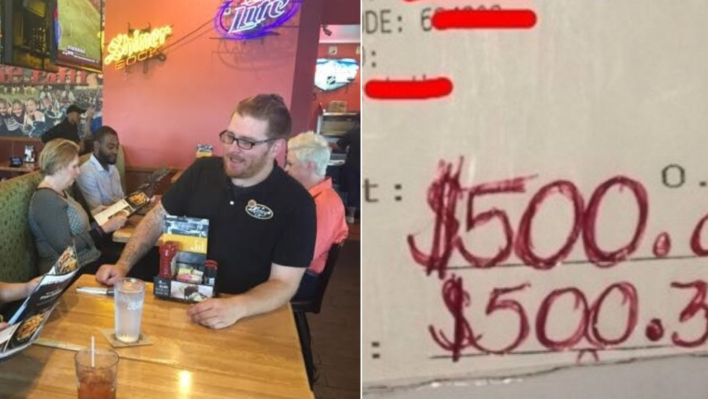 Waiters and waitresses are all too often unsung heroes.
By Amanda Shaw    November 6, 2022

Waiters and waitresses are all too often unsung heroes.

“Every time I get to work,” says 32-year-old Kasey Simmons of Little Elm, Texas, “I say: it’s a great day. I’m going to make some friends and make some money.”

Crying in the Line for Groceries

Simmons is a waiter at an Applebee’s restaurant, and his upbeat, positive attitude seems to follow him wherever he goes. One day, before working the restaurant’s dinner shift, Simmons stopped at a nearby Kroger grocery store. As he waited in line, he noticed that something was wrong with the woman in front of him. She looked as though she had been crying; her gaze was downcast, as if to avoid bringing attention to herself.

But Simmons noticed—and the woman’s sadness bothered him. He hoped he could brighten her day just a little, so he encouraged her to smile. “There’s no reason to look so down,” he told her. “I’m sure you have a beautiful smile because you are a beautiful lady.”

When that didn’t cheer her up, Simmons told the cashier that he was going to pay the woman’s grocery bill. The woman protested, but Simmons insisted that it was a small gesture. It was only $17, and he hoped that the random act of kindness would lighten the woman’s mood.

He didn’t know what was bothering her, but he didn’t want to pry. He just wanted to bring a little joy to her day. After paying the woman’s grocery bill, Simmons gave her his Applebees business card and wished her a better day.

Unfortunately, that same day was about to turn sour for Simmons himself. At work, he was swamped, falling miserably behind waiting tables. Simmons looked at the next customers who came in, a couple, and apologized in advance for what he knew was going to be a very long wait. “I’m in the weeds right now,” he said and offered to pay for the couple’s drinks while they waited, a wait Simmons estimated to be 45 minutes long.

The man and woman sat down and ordered the cheapest item on the menu: a flavored water. But, when they were done, instead of letting Simmons pay for it, the woman asked for a bill so that she could leave a tip. When Simmons returned with the bill, the customer asked if he could split it and charge the small amount to two separate credit cards.

RELATED: Girl With Autism Refuses to Eat Her “Broken” Burger – Chili’s Waitress Has a Surprising Response

Simmons, exhausted and stressed, could have said something unpleasant or flat out refused. Instead, true to his kind, caring self, he did what the woman asked and returned with two 37-cent bills.

Later, after the couple had left the restaurant, he returned to the table to pick up the slips. He was shocked to find that the amount signed for on one of the bills was $500.37.

“I thought, ‘this has got to be a joke. There’s no way,’” laughed Simmons.

But it wasn’t a joke. The woman had also left a long note that covered the front and back of a napkin. In it, she thanked Simmons for the kindness he had shown toward her mother that morning.

The woman in the grocery store had, in fact, been crying; it was the three-year anniversary of her husband’s death. The daughter, Simmons’ customer, wanted to thank him for making her mother smile for the first time in a long time. She used the business card Simmons had given her mother to track him down that evening.

RELATED: Struggling Waitress Can Hardly Get Through Her Shift – Then a Customer Leaves Her a Note That Makes Her Cry

“On behalf of the Sullivan family, I want to thank you for being the person you are. On one of the most depressing days of the year (the 3 year anniversary of my father’s death), you made my mother’s day wonderful. She has been smiling since you did what you did. Her grocery bill was only $17.00, and you insisted on paying, told her she was a very beautiful woman. I have not seen her smile this much since Dad died. Although we did not eat and conversate [sic] and you didn’t know who we were, my husband and I knew because of the card you gave her. Thank you. You are one of a kind. Have fun with this.”

Simmons was shocked. “What I did at the grocery store, I would want someone to do for my daughter, mom or grandmother,” he said humbly.

Five hundred dollars represented a tip of 135,000%—surely the best tip Simmons will ever get—and he got it on a Tuesday that he described as “the worst day of my Applebee’s career.” In fact, he was about to walk out when the woman and her husband came in for that flavoured water.

Waiters and waitresses are often unsung heroes. In this case, Simmons wasn’t even on the job when he tried to make one person’s day better. One kind turn deserves another, and Simmons’ positive energy was certainly rewarded that day.