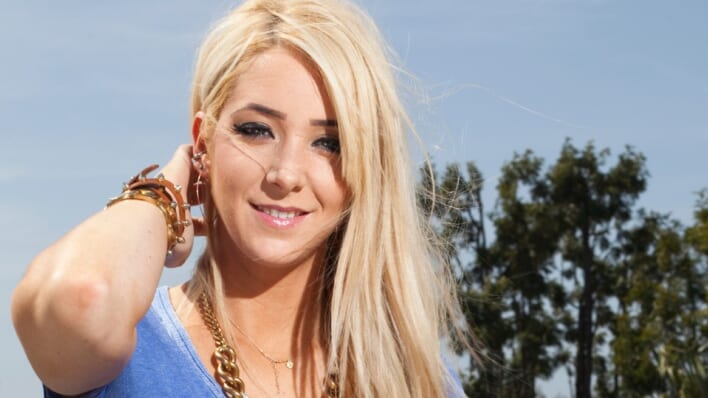 What Happened to Jenna Marbles, One of YouTube’s First Big Stars?

It’s been two years since Jenna Marbles announced she was stepping away from her YouTube channel. Where is Jenna Marbles now, and will we ever see her again?
By Jenna Pearl    September 3, 2022

It’s been two years since Jenna Marbles announced she was stepping away from her YouTube channel. Where is Jenna Marbles now, and will we ever see her again?

When it comes to the early years of vlogging, the first YouTube personality that many people will think of is Jenna Nicole Mourey, a.k.a. Jenna Marbles. Her 20 million subscribers on the video sharing platform looked forward to her goofy, wholesome videos every Wednesday. But even this “unproblematic queen” had some skeletons in her closet.

RELATED: Are You at Risk of Being Cancelled? Here’s Everything You Need to Know

Jenna last posted to her YouTube channel in June of 2020. In the video, she apologized for her past mistakes and announced that she was leaving YouTube indefinitely. Her online presence has been minimal ever seen.

So, what happened to Jenna Marbles, and will we ever see her on YouTube again?

Like most early YouTubers, Jenna Marbles didn’t plan on turning her social media presence into a career. In fact, before starting her YouTube channel she earned her Bachelor of Science degree in psychology from Suffolk University and a Master of Education degree in sport psychology and counseling from Boston University. When she started her YouTube channel, she was bartending, working at a tanning salon, and go-go dancing to pay her bills.

Jenna Marbles first exploded onto YouTube in 2010, with her viral satirical video “How to Trick People into Thinking You’re Good Looking.” In it, she lauds the benefits of looking “nothing like yourself” and suggests bleaching your hair, tanning, and wearing dark eye makeup with a nude lip (it was 2010, after all). The video got 5 million views within the week it was released. It currently has over 72 million views.

Another popular video from that time was “How to Avoid Talking to People You Don’t Want to Talk To.” Jenna has privated or deleted the original video, but reuploads still exist on other YouTube accounts. The video encourages viewers to make faces at people to end awkward conversations – be it with strange men in bars, unhoused people begging on the street, or door-to-door evangelists.

Many of her early videos have since been privated, much of them including personal information or potentially offensive humor. The internet was a different place in the early 2010s; people shared way more about their personal lives than they really should have, and most of the popular humor on sites like YouTube relied on shocking the audience with politically incorrect comedy. But as YouTube changed, so did Jenna Marble’s content.

Eventually, Jenna Marbles got into the rhythm of posting a video every Wednesday. Common themes over the years have included her many pets (four dogs, a hamster, and fish), her longtime boyfriend Julien Solomita, zany attempts at beauty treatments, and random thoughts from around her house. Her videos have a goofy, lighthearted feel, and fans looked forward to her videos every week.

As she entered her thirties, Jenna Marbles’s content continued to become more wholesome. She was soon called an “unproblematic queen” by many of her fans – a moniker, as it turns out, that she always felt uncomfortable with.

In the past several years, cancel culture has become a strong force on sites like Twitter. Celebrities and internet personalities alike are getting called out for present or past sins – some real, some imagined – and virtual mobs of thousands will call for justice. Sometimes the mob will feel that a simple apology is enough – other times they will call for the sinner’s resignation from their career.

Many people were cancelled in 2020, particularly in connection to past racially insensitive comments and actions. It was during this time that Jenna Marbles got called out for some of her old videos.

RELATED: 16 Nicki Minaj Quotes to Remind you of Your True Worth

In one video titled, “What Nicki Minaj Wants In A Man,” she impersonates Nicki Minaj, donning a pink wig and fake rump. Critics on the video pointed at Jenna’s darkened complexion and accused her of donning blackface – a deeply offensive practice going back to old minstrel shows in the United States. Jenna would address this, apologizing for being offensive.

In a comedy music video titled “Bounce that Dick!” Jenna briefly wore a conical hat and fake facial hair and rapped some derogatory lyrics about Asian people. This she also addressed, calling it “inexcusable.”

Jenna Marbles’ Apology Video and Disappearance From the Internet

On June 25, 2020, Jenna uploaded an apology video, which has since been deleted but exists on other YouTube channels.

Apology videos are practically a genre in themselves on social media. Typically a dressed-down YouTuber films from their living room, making excuses and skirting the issues they were called to address. These issues can range from dishonesty all the way up to sexual misconduct. Often, there will be ads before the video – meaning that the creator is earning money from its views. Many consider YouTube apologies “unapologies” and manipulative.

Jenna’s apologies have been different. The June 2020 video is actually her second apology video – the first came in 2018. In it, Jenna spends over 40 minutes taking accountability and apologizing for not properly researching how to care for a few fish she bought.

In the June 2020 video, Jenna addressed the racism in some of her old videos, including the Nicki Minaj video, as well as the slutshaming views and generalizations she had previously expressed. She brought up videos and behavior that nobody was criticizing, and she made no excuses.

Then Jenna did something unprecedented in an apology video. She announced that she would be stepping away from YouTube, “for now or forever.” And she has. The apology video was the last video she posted to her channel. Two months after that, she wrapped up the Jenna & Julien Podcast, saying that she was getting help and focusing on “just being a person.”

Where Is Jenna Marbles Now?

Jenna Marbles has been basically radio silent since leaving YouTube- quite an accomplishment, considering that her partner Julien Solomita remains a full-time content creator. In April 2021, Solomita made a video announcing that he and Jenna were now engaged. In February 2020 he posted a photo of the two of them holding hands and walking down a street at night.

That was all the internet knew about Jenna until July 2020, when a fan posted a current photo with Jenna and Solomita online. Twitter immediately ran with the photo. People were glad to see Jenna, who looked like she’s doing well. Others were worried that posting the photo went against Jenna’s wishes to remain offline.

The photo has sparked hope for some fans that their favourite content creator would be returning to YouTube. It’s unclear if she ever will; but if her current subscriber count is anything to go by, she’d be welcomed back with open arms.

What Happened To Hayden Panettiere, the ‘Heroes’ Cheerleader Who Disappeared?