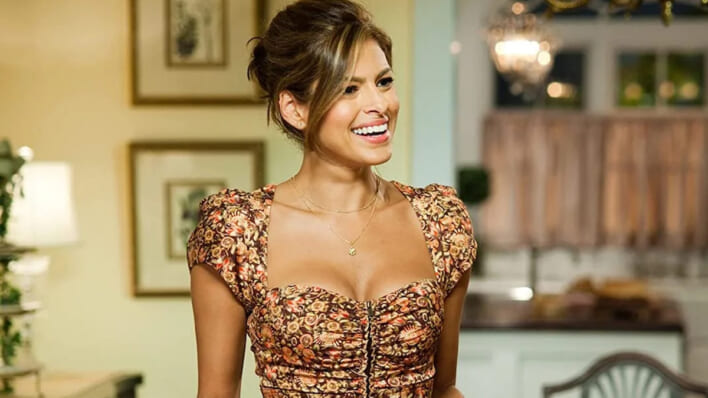 Where Is Eva Mendes?

Mendes starred in 2000s hits like Training Day and Hitch, but many wonder why the talented actress decided to leave it all for a low-key life for over a decade.
By Rhea Kumar    September 25, 2022

Mendes starred in 2000s hits like Training Day and Hitch, but many wonder why the talented actress decided to leave it all for a low-key life for over a decade.

Eve Mendes dominated the early-to-mid 2000s box office, though you’d probably recognize her best from her roles in Training Day alongside Denzel Washington, or Hitch, where she played Will Smith’s love interest.

RELATED: Eva Mendes Revealed Her Two Hollywood Dealbreakers – And a Dream Sequel… with Will Smith?

Her role in Hitch was a breakthrough not only because of positive reviews for her performance, but because it sealed Mendes as one of the first minority actors to play the lead in a mainstream romantic comedy.

But what happened to Eva Mendes, and where is she now?

After her initial success, Mendes went on to star in a string of other successful dramatic roles, including 2012’s The Place Beyond the Pines, where she met her partner, Ryan Gosling. Many fans wondered why Mendes decided to slow down her career, and eventually quit acting altogether.

She recently sat down with Variety to discuss her acting career, which spans over two decades, and what made her to decide to quit and pave her own path.

In the candid interview, the mother of two says, “I got tired of fighting for the good roles.” She continued, “There just was a point where I thought ‘I’m going to create my own opportunities and become a producer on things and create my own material.’ But, it just didn’t feel worth it to me.”

Mendes went on to describe the traditional Hollywood landscape as a reason why she also walked away, citing the lack of diverse roles she was offered. “There are more opportunities for Latina actresses now, but when I bowed out 10 years ago, I wasn’t being offered things that weren’t specifically Latina.”

She continued, “It is exciting that things are different now, so who knows what I will do in the future. But right now, I’m keeping it in the home with my kids.”

How COVID 19 Made Eva Mendes a… Sponge Business Owner?

Her breakout role came in 2001’s Training Day, and her success continued steadily. She met her current partner, Ryan Gosling, on the set of The Place Beyond the Pines and together, they have two daughters, Esmerelda Amada Gosling (8) and Amada Lee Gosling (6).

While Mendes maintains a low-key life away from the spotlight, it certainly doesn’t mean that she hasn’t been busy. The ex-actress is now a full-fledged entrepreneur and co-owner of sponge company, Skura Sponges, which makes color-changing, anti-microbial sponges.

Mendes details a weekend tradition of throwing on Salsa music and helping her mom clean the house when she was a child. The actress says that a clean house is connected to her mental well-being.

She became interested in the Skura Sponges during the COVID-19 pandemic, and reached out to the owners of the company to express her interest in the product, but one thing led to another and Mendes evolved from a happy customer to a member of the company. Today, the website boasts Mendes as a proud co-owner, and features a section called “Eva’s Essentials,” which showcases some of her favorite products.

There’s no telling whether Mendes will return to the spotlight — though she has indicated that she might come back for one special role — but the actress has certainly proven that she’s just getting started, and it’s never too late in one’s career to pave their own path.