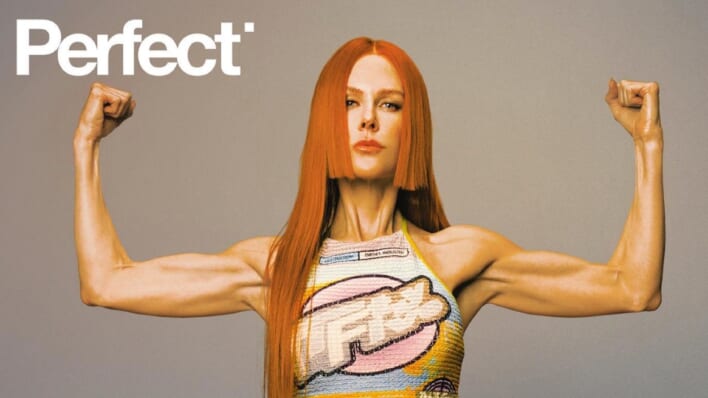 Nicole Kidman’s Perfect Magazine cover is challenging old Hollywood ideals of how women should look. Femininity isn’t what we always thought it was, but it’s whatever we want it to be and stars like Kidman are setting an example of health over aesthetics.
By Bianca Mercuri    September 1, 2022

Nicole Kidman’s Perfect Magazine cover is challenging old Hollywood ideals of how women should look. Femininity isn’t what we always thought it was, but it’s whatever we want it to be and stars like Kidman are setting an example of health over aesthetics.

Nicole Kidman recently appeared on the cover of Perfect magazine and it sparked a conversation among the public. Kidman is the proud winner of an Oscar, two Emmys, five Golden Globes, and a Bafta. She’s a terrific actress with a long-standing career, known for her roles in Moulin Rouge, Nine Perfect Strangers, and Bewitched among others. She’s always been known to have a fit, feminine figure, but her recent photoshoot showed a different side of her.

RELATED: What We Can Learn From Nicole Kidman’s Infamous Breakup Photo

Her new physique is rather impressive, especially considering the Australian actress is a 55-year-old mother of four. It seems that her best anti-aging technique has been hitting the gym. But some people are taking to this new look. Let’s talk about Hollywood expectations of women’s bodies, and how Kidman is challenging those old ideals.

How Nicole Kidman Became the Master of Reinvention

Part of being a great actress is being able to truly immerse yourself in a role and embody the character. Kidman uses this technique – literally. She’s known to reinvent her looks on-screen, sometimes becoming unrecognizable from one project to the next. She’s always managed to transform herself in ways that the audience doesn’t expect which is part of why she’s collected the accolades she has.

In 2003, Kidman won an Academy Award for her role as Virginia Woolf in The Hours. For this role, she completely altered her outward appearance, something that impressed the public. More recently, in her film Destroyer, she’s pulled off yet another metamorphosis, sporting sunken eyes, a deep tan, and a shaggy brown bob.

In a more symbolic fashion, Kidman has reinvented herself in her personal life as well. She’s taken on strength in a multitude of ways, but we can see the physical manifestation in her recent Perfect magazine cover. Kidman doesn’t need a botox injection to reverse the clock, her biceps seem to be doing it for her. But, it seems that looking young just isn’t enough to please everyone as she’s been getting noticed for ditching her slender figure.

The one standard that has always been imposed on women in Hollywood is femininity. The soft and slim physique has always been portrayed as most desirable both on and off-screen. Anyone who doesn’t fit that delicate frame is seen as less beautiful. This isn’t just in regard to curvy women, but also to fit women. We’ve seen Tennis star Serena Williams being called manly as well as Olympic gymnast Simon Biles being body-shamed online for her muscular form.

Biles tweeted, “You can judge my body all you want, but at the end of the day it’s MY body. I love it and I’m comfortable in my skin.” While Biles might be resilient to the criticism, that doesn’t make it less hurtful. Body shaming is body shaming regardless of who it targets. Since when did toning up equate to being under-feminine?

The issue with Hollywood’s view of the body is that it’s based on aesthetics and not on health. Physical activity is one of the best things that you can do to take care of yourself, inside and out. Exercise has fantastic mental health benefits as well, which many women in Hollywood most likely need given their constant media scrutiny. We can encourage women to stand up to these body standards by lifting weights and lifting each other up, but these standards still hold weight on our self-perception.

How Can We Challenge Traditional Femininity?

So, why isn’t health considered beautiful? A strong mind and a strong body should be the most beautiful attribute. It’s the roots of outdated body norms that still have our society in shackles. We are still bound by the male gaze and limited by what we see portrayed on our screens as true beauty.

Celebrities like Kidman, Demi Lovato, Halle Berry, Mindy Kaling, and Ashley Graham take the camera head-on with confidence in who they are and it’s inspiring to every girl out there who doesn’t fit the mold. Lisa Kudrow recently shared her story of how she felt less feminine than her tiny co-stars on Friends which gave fans of the show much more insight into how much weight that pressure holds on our favorite stars.

Sexist views are still running rampant among Hollywood’s red carpets and sets. It’s something we are exposed to on a daily basis, and therefore becomes part of the way we think. The only way to challenge these views is to recognize just how wrong they are and to uplift the women who challenge those ideals.