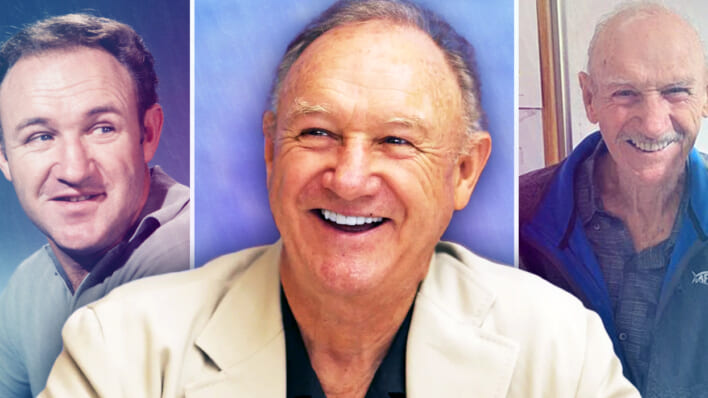 Whatever Happened to Gene Hackman?

Film legend Gene Hackman walked away from Hollywood in 2004, only to reemerge recently for a surprise public appearance, in Santa Fe, New Mexico.
By Kevin Melrose    June 22, 2022

Film legend Gene Hackman walked away from Hollywood in 2004, only to reemerge recently for a surprise public appearance, in Santa Fe, New Mexico.

Gene Hackman was among cinema’s most recognizable actors for five decades. But after more than 80 films, from The French Connection and Superman to Unforgiven and The Royal Tenenbaums, the two-time Oscar winner quietly retired from acting in 2004. Since then, he has returned to the public eye only on rare occasion, most recently in May.

Now 92, Hackman lives in Santa Fe, New Mexico, with his wife, Betsy, whom her married in 1991. It’s there he was photographed last month with Seth Rudetsky and Ana Gasteyer after attending a performance of Broadway Confidential. Posted by an excited Rudetsky, the photo provides a partial answer to what happened to Hackman. However, there’s more to the story.

Although it’s difficult to imagine Hollywood without Hackman, his career was far from a sure thing. It began unceremoniously in 1957 at California’s Pasadena Playhouse, where the 27-year-old ex-Marine and his friend, Dustin Hoffman, were voted “Least Likely to Succeed.”

”I had the all-time lowest score of students from the Playhouse,” Hackman recalled. ”I don’t know if they ever actually asked me to leave. But I was given so little encouragement that I kind of, even in my insensitive state at that time, understood that at least the academic side of acting was not for me.”

RELATED: The Dark Reason Matilda’s Mara Wilson Quit Acting – And the Light She Found on the Other Side

However, Hackman was determined to prove the Playhouse wrong. He, with first wife Faye, and Hoffman set out for New York City, where they befriended Robert Duvall, a fellow struggling actor. Hackman worked a string of subsistence jobs — counterman, waiter, doorman — even as he landed bit television parts. Those led to Off-Broadway and, ultimately, film roles.

His breakthrough came in the 1967 crime drama Bonnie and Clyde, starring Faye Dunaway and Warren Beatty. Hackman earned his first Oscar nomination for his performance as Buck Barrow, a part he landed only after being dropped from The Graduate. (He was cast as Hoffman’s potential father-in-law, Mr. Robinson, despite their seven-year age difference.)

Hackman followed with a chain of memorable performances in such films as I Never Sang for My Father, The French Connection (for which he earned his first Oscar) and Young Frankenstein. He was an undisputed star by the time of 1978’s Superman, for which he commanded $2 million ($9.6 million in today’s dollars) to play Lex Luthor.

His ascent continued through the 1980s, with roles in Superman II (we don’t talk about Superman IV), Reds, Hoosiers and Mississippi Burning. The 1990s brought Hackman’s Academy Award-winning turn as Sheriff “Little Bill” Daggett in the 1992 Western Unforgiven. Then came such diverse projects as the legal thriller The Firm, the submarine drama Crimson Tide, and the comedies Get Shorty and The Birdcage.

RELATED: What Happened to Josh Hartnett – And Why It’s Important

Hackman kicked off his final decade in Hollywood with a blend of dramas, thrillers and comedies, including Under Suspicion, The Mexican and The Heist. He then played the family patriarch in what’s easily a career highlight, Wes Anderson’s 2001 comedy-drama, The Royal Tenenbaums. “I’ve been very lucky in life, and I’ve done just about everything that I would want to do as an actor,” he told the BBC. “I don’t know that I do them all very well, but I like a lot of variety, though. At this point in my life and my career I feel like I can back off and do the odd picture like Tenenbaum and feel good about it.”

After one more legal thriller, 2003’s Runaway Jury, Hickman quietly brought his distinguished film career to a close in the 2004 political comedy-satire, Welcome to Mooseport, opposite Ray Romano.

Why Gene Hackman Retired from Hollywood

Hackman’s Hollywood departure was as understated as his entrance. In 2004, the actor acknowledged to Larry King he had no projects on the horizon. “It’s probably all over,” he said.

That prediction held true, with Hackman confirming his retirement in 2008. ““I haven’t held a press conference to announce retirement, but, yes, I’m not going to act any longer,” he said. “I’ve been told not to say that over the last few years, in case some real wonderful part comes up, but I really don’t want to do it any longer.”

However, he admitted in the same interview that he already missed acting. “But the business for me is very stressful,” he said. “The compromises that you have to make in films are just part of the beast, and it had gotten to a point where I just didn’t feel like I wanted to do it anymore.”

Asked in 2011 about the prospect of one final film, Hackman told GQ, “If I could do it in my own house, maybe, without them disturbing anything and just one or two people.”

That never happened, of course. However, the Hollywood veteran hasn’t spent the past 18 years simply relaxing, and riding bikes around Santa Fe. In 1999, Hackman authored the first of three historical novels with Daniel Lenihan, and wrote two more books on his own.

Ever modest, Hackman wants to be remembered as “a decent actor.” “As someone who tried to portray what was given to them in an honest fashion,” he told GQ. “I don’t know, beyond that. I don’t think about that often, to be honest. I’m at an age where I should think about it.”