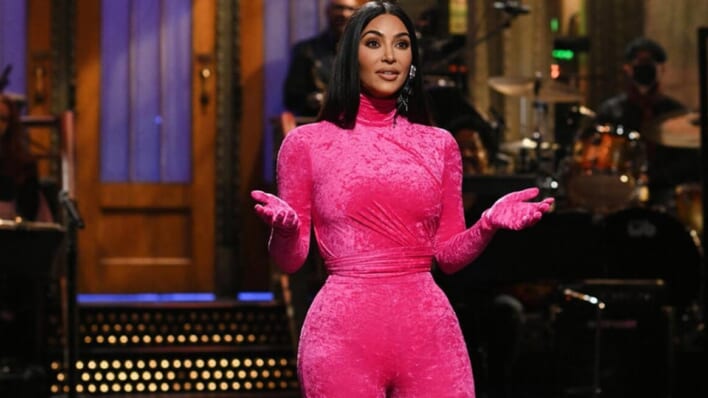 One Word Kim Kardashian Used To Let Kanye West Know The Marriage Was Over, Here’s Why It Works

Kanye West May have saved Kim Kardashian’s reputation with one simple act, but the rapper still walked out in the middle of his wife’s SNL monologue because of one simple word.
By Amy Lamare    July 19, 2022

Kanye West May have saved Kim Kardashian’s reputation with one simple act, but the rapper still walked out in the middle of his wife’s SNL monologue because of one simple word.

The relationship between Kim Kardashian and Kanye West has many well-documented ups and downs in the 13 years since they started dating. They got married. They had four kids. They got divorced. West had multiple public breakdowns while Kardashian held her head high and tried her darndest to stay out of the drama for the sake of her sanity and for her kids.

While Kardashian and West were together they made headlines globally. Now that they are in the midst of a divorce, they are still making headlines – but of a different sort.

In October 2021, Kardashian started dating Saturday Night Live’s Pete Davidson and this set West off in a big way. He recorded a diss track, made a video burying a clay effigy of Davidson, and made several not-so-veiled threats on social media, which have since been deleted.

Understandably, Kardashian hit her breaking point and it was during her monologue on SNL on October 9, 2021, that she uttered the one word that made West walk out in the middle of her monologue and planted the seed of retribution for Kardashian that has been growing ever since.

On the morning of Kardashian’s inaugural hosting of Saturday Night Live, Kanye West had a package delivered to her room. In it was the 2007 sex tape that catapulted Kardashian into fame along with the original computer and hard drive it was on. The tabloids claimed that there was additional footage of the infamous night with Ray J and were threatening to release it.

Kardashian , now a 41-year-old mother of four children, was understandably upset about the possibility of her kids one day seeing their mother in flagrante delicto. West may have saved the SKIMS founder with this act (if the original owner has never heard of the cloud). However, what happened later that day during her monologue proved it was too little too late.

What Kim Wanted and What Kanye Wanted Were Too Different

When it comes right down to it, no one is ever going to know exactly what happened behind closed doors (in Kardashian’s world this means the rarely used phrase ‘off camera’). West’s bipolar disorder and resistance to treatment are well documented, a situation Kardashian dealt with for more than a decade.

On October 9, 2021, Kim Kardashian made her debut as a host of Saturday Night Live. By all accounts, she crushed it, coming across as charming, sweet, funny, self-deprecating, and friendly.

One person who did not love the monologue was her soon-to-be ex-husband. As she made light of the media circus that is her life, she joked that the reason she divorced West, ‘the best rapper of all time,’ and ‘a talented, legit genius’ was because of his ‘personality.’

But the reason West was so upset and stormed out mid-monologue was not the comment on his personality, it was because she said they were divorced. In West’s mind, she should have said that she ‘filed for divorce’ because he was still trying to win her back and the divorce was not finalized.

While divorce is inevitably hard on anyone going through it, it can be tough on couples in the spotlight. Paparazzi lurks behind every car waiting to catch celebrities at their worst moments. To go through something as heartbreaking and life-changing as a divorce with cameras tracking your every move adds more fuel to a devastating fire.

Kim and Kanye’s Divorce has been Wild

Kim Kardashian filed for divorce from Kanye West in early 2021. In the aftermath of the filing, West made several high-profile moves to either get back together or creep her out. He made public statements declaring that they were or would be back together. He bought a house across the street from the home he used to share with the family to be closer to his four kids but it also puts him with a clear view of the comings and goings of Kardashian and boyfriend Pete Davidson (whom he’s made threats against).

Oh, and as was revealed on the May 11, 2022 episode of The Kardashians (which was filmed in November 2021), West trolled Kardashian, saying her career was over due to a dress she wore to the Wall Street Journal Magazine’s Innovator Awards. During their marriage, West styled the celebrity superstar, taking her from tabloid fodder to appearing on the cover of publications like Vogue. Now Kardashian wears what she wants and West doesn’t like it, even texting her a photo of Marge Simpson wearing a similar dress, according to Cosmopolitan.

In March 2022, Kanye wrote in an Instagram post that said he hadn’t seen his kids, “This was on my daughter’s back pack (SIC) whe n I was “allowed” to see her last week. This is why I go so hard for family. I am wired to protect my family at all cost as the priest of my home. Don’t worry Northy God is still alive.”

Kardashian was quick to respond, “Please stop with this narrative. You were just here this morning picking up the kids for school.”

Kardashian has tried to, in her words, take the high road. In an interview with Ellen DeGeneres, during which the former talk show host commented on how well she’s handling West, Kardashian said, “I think that’s just who I am, and I always had such a good example in my mom and my dad and their relationship. So I’m always just hopeful, and no matter what goes on, it’s the father of my kids. I’ll always be protective. I always want my kids to just see the best of the best. I just try to—as hard as it can be sometimes—I do try to ignore it and try to do whatever’s best for the kids. Take the high road.”

Where Are Kim and Kanye in the Divorce Proceedings Today?

Kim Kardashian filed for divorce in February 2021 after seven years of marriage. In March 2022, a judge officially granted her a request to have her legal status changed from married to single. She requested this change in status in December 2021, effectively legally ending her marriage to West. Being declared ‘legally single’ means the divorce is split into two parts. The first is Kardashian’s single status and the second is settling the custody plans for their four children and splitting finances.

As of this writing, no formal custody arrangement or announcement of the finalization of their divorce has been made. In late May, West released the song True Love, which contains the lyrics “Wait, when you see the kids? I’ll see y’all tomorrow/ Wait, when the sunset? I see y’all tomorrow/ Wait, when I pick ‘em up, I feel like they borrowed.” The song continues, “When I gotta return them, scan ‘em like a bar code/ Wait, no hard feelings, but these feelings hard though/ Wait, who got the kids in those ‘What are those?’”

West may think that no good deed goes unpunished and he is the victim in this story, but Kim Kardashian continues to hold her head high during the tumultuous time and favor humor over negativity. Kanye’s fourth attorney recently quit.