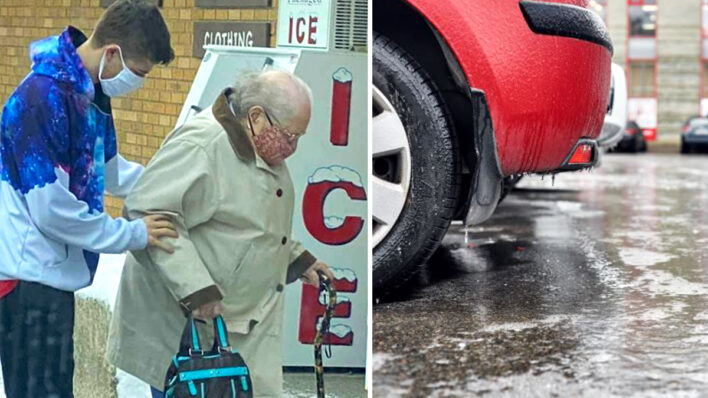 A stranger saw someone in need and decided to help, but he didn’t expect to go viral.
By Lindsey Staub    April 25, 2022

A stranger saw someone in need and decided to help, but he didn’t expect to go viral.

21-year-old Isaiah Mcintrye had just left the store, gotten back into his car, and taken his mask off.

He was all set to drive away, but before he did, he caught sight of an elderly woman struggling to walk across the ice and get into the store. That’s when Isaiah decided to help.

He got out of his car, put his mask back on, and offered his services to the older woman. The woman accepted his help, and Isaiah guided her over the ice by gently holding onto her arms and steadying her.

RELATED: 74-Year-Old Woman Stands by the Highway Every Day and Waves – For a Very Special Reason

Neither the woman nor Isaiah knew someone was watching their interaction with a camera ready to snap a picture. Samantha Voisine saw Isaiah’s act of kindness and decided to share it on Facebook.

“I don’t know who he is but Thank You to the young gentleman at KG who drives a newer Subaru Impreza in Millinocket Maine who put his mask back on and got out of his car to help this elderly woman across the ice!” she captioned the post. “In a time like this, it gives everyone hope!”

The photo quickly garnered attention and soon had thousands of shares. The picture even made the local news, where the woman was finally identified as 93-year-old Marjorie Moore.

Marjorie and Isaiah reunited at an interview for News Center Maine, where they recounted their story. Many people in the community already knew Marjorie, who isn’t like most other 90-year-olds. For example, on her 90th birthday, Marjorie went sky-diving!

According to Marjorie, when she saw the path to the store covered in ice, she was about to give up and turn around. However, before she could leave, Isaiah came up to her and offered his help.

RELATED: Plumber Refuses To Charge 91-Year-Old Woman For His Services – Then, He Hands Her A Receipt

“He was just a young fellow… I thanked him and told him he was a very nice gentleman,” Marjorie said. “There are a lot of people who are very nice. Even over at the shopping center, they will see me and say you need help getting into the car or with your groceries.”

Isaiah, ever so modest, was surprised to see the picture gain a lot of attention.

“It’s just how I was raised,” he said. “It’s not every day that you see people react positively towards other people.”

We’re All in This Together: The Importance of Stepping Up for Strangers

A picture is worth a thousand words, and all of these words describe a kind, selfless young man and the daredevil elderly woman he helped.

When he saw a stranger needed his aid, Isaiah stepped up. He didn’t expect any praise, he just did what was needed to be done. The more of us willing to help strangers, the better the world will be.

lend a helping hand
“Great opportunities to help others seldom come, but small ones surround us every day.”
– Sally Koch.
Tags
Share
← Prev Post Next Post →