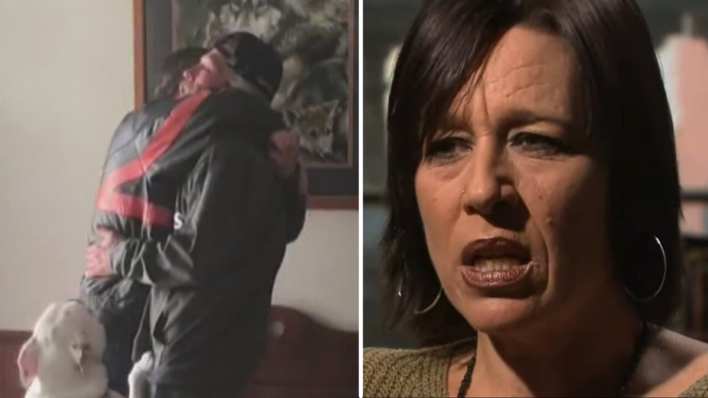 One married couple drove 600 miles to reunite a homeless man with his estranged family.
By Sophie Tolias    May 24, 2022

One married couple drove 600 miles to reunite a homeless man with his estranged family.

James had been living on the streets of Little Rock, Arkansas for over a decade and was a familiar face to locals, including married couple Jodi and Dawn Gieber. Dawn would see him every day when she headed to the courthouse, and Jodi while he patrolled the streets.

“People would say James was very angry. James was a mean person. He wasn’t. James was just hungry,” Dawn told KARK. “He was cold. He was eating out of dumpsters. James just had no resources and my husband and I just felt that there was something we needed to do to help him.”

Why One Woman Decided to Reach Out to a Homeless Man

One day, Dawn, a records specialist at the Pulaski County Circuit Court, asked James a question no one had ever asked him.

One day I just asked him, ‘Why are you homeless?’ I treated him like a human — we all have a story.

James revealed he had lost his way and lost contact with this family. He later tried finding them, but didn’t know how.

“I talked to my husband and told him we had to do something,” says Dawn. “James didn’t have the resources. We did Google searches and finally, my husband found some numbers.”

Many phone calls, voice messages and emails later, they finally got a response. “It was right before Thanksgiving and we get a call back from his niece. They had been looking for him and thought he was dead,” Dawn said.

How a Married Couple Proved that Listening Can Change a Life

They arranged for James to talk to his family and then decided to take a road trip and take him home. But they hit a roadblock when they found out James had outstanding warrants preventing him from leaving Little Rock.

“We knew we had to be careful because of the jobs we both hold,” Dawn says. “But I went before the judge and told him James’ situation and that we were willing to pay all his fees and the judge dismissed all charges.”

Jodi got James some clothes and brought him back to the house. The couple and James packed up the car and drove nearly 600 miles to Illinois.

Seeing James reunite with his family was so rewarding. It was just the right thing to do — he’s a person and that matters.

According to his brother, James is now living with his family in Illinois and is doing well — all because Dawn took the time to talk to him.

Taking the time to listen can make a huge difference to somebody’s life.