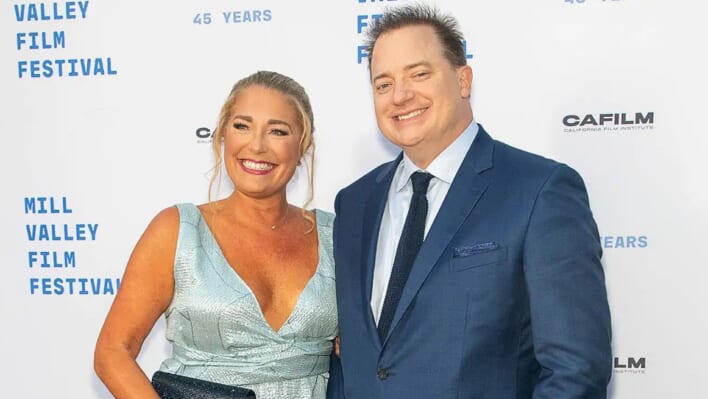 After years of hardship, Brendan Fraser is back in the spotlight and winning hearts with his inspirational comeback.
By Barbara Pavone    October 26, 2022

After years of hardship, Brendan Fraser is back in the spotlight and winning hearts with his inspirational comeback.

Brendan Fraser was one of Hollywood’s biggest A-listers in the late 1990s and early 2000s. He shot to fame thanks to his starring role in 1997’s George of the Jungle, then solidified his status with 1998’s Gods and Monsters and 1999’s The Mummy.

A slew of roles followed but after 2008’s third Mummy installment, the actor slowly stepped away from the spotlight. By the 2010s, he had seemingly vanished. As we now know, a number of hardships, both personal and professional, were to blame. However, the actor is now making a major comeback and inspiring us along the way.

Brendan Fraser and fellow actor Afton Smith enjoyed over a decade of romance after meeting at a barbecue hosted by Winona Ryder in 1993, per DailyMail. In 1997, they appeared together in George of the Jungle, then tied the knot in 1998. A family followed as they welcomed three sons together — Griffin Arthur in 2002, Holden Fletcher in 2004, and Leland Francis in 2006 — before announcing their split in December 2007.

RELATED: What Happened to Anna Marie Tendler After Her Divorce from John Mulaney?

At the time of the announcement, the couple’s publicist assured Fox News that “they continue to maintain a close and caring friendship.” Unfortunately, that didn’t last and the separation soon turned messy. When the pair’s divorce was eventually finalized in February 2009, Fraser was ordered to pay $50,000 a month in alimony until 2019, per FindLaw. He also had to pay an additional $300,000 a year in child support, totalling a whopping $900,000 a year.

In the settlement, the exes agreed that Fraser would be able to ask for a modification if his yearly income ever dropped below $3 million and in 2013, that’s exactly what he did. Fraser and Smith found themselves back in court as the actor sought to pay less alimony and argued he no longer earned enough to cover the initial sum. As a source told RadarOnline, his health was mainly to blame. “Brendan’s trying to reduce his alimony because he suffered a serious injury that could really impact his movie earning potential,” the insider shared.

Smith wasn’t buying it. In her response, she accused her ex of fraud and claimed he actively hid $9 million worth of contracts during their original settlement negotiations. In the end, the outcome of the court proceedings was kept under wraps but we can likely assume that the ordeal hurt Fraser —  financially and emotionally.

Brendan Fraser’s difficult divorce wasn’t the only hardship he faced as he retreated from the limelight. When GQ profiled him years later in 2018 in a feature titled “What Ever Happened To Brendan Fraser?” the actor revealed he had silently suffered both physical and emotional pain for years.

For one, Fraser shared how the Mummy franchise that made him a household name also broke him. All of the stunts he was doing during the film had very real repercussions on his body. As he recalls, “By the time I did the third Mummy picture in China [in 2008], I was put together with tape and ice.”

RELATED: ‘Cancel Culture’ Almost Killed Constance Wu – Her Comeback Is a Significant Lesson for Everyone

A slew of surgeries followed, including a partial knee replacement, an operation on his vocal cords, and a laminectomy on his spine which “didn’t take, so they had to do it again a year later.” All in all, he spent almost seven years seeking medical treatment and his career took a real hit. As he explained, “Going to work in between being in and out of those hospitals, that wasn’t always possible.”

Around that time, Fraser also lost his mother, but perhaps the toughest ordeal of all was one he didn’t speak about for over a decade. As Fraser told GQ, he suffered an alleged sexual assault at the hands of former Hollywood Foreign Press Association (HFPA) president Philip Berk in 2003. It was the final straw that broke him. “I became depressed,” he shared. “I was blaming myself and I was miserable” and so, it “made me retreat. It made me feel reclusive.”

It didn’t help that he felt shunned by Hollywood after reporting the incident internally. “I don’t know if this curried disfavor with the group, with the HFPA, but the silence was deafening,” he told the mag.

It’s been over a decade since there’s been much talk about Brendan Fraser but the actor is now back and better than ever. His leading role in Darren Aronofsky’s The Whale isn’t just generating major Oscar buzz, it’s also ushering in a new era for the actor. As film and media historian Chris Yogerst told NPR, “It’s almost like the public was just waiting for this moment. Everyone has missed him.”

Nicholas Baer, an assistant professor of film studies at the University of Groningen, agreed. “[The Whale] is offering us an opportunity to kind of recognize the virtue and the kind of fundamental decency of Brendan Fraser, who has been really wronged by the industry and has long suffered,” he mused.

RELATED: A ‘Destructive’ Habit Destroyed Jennifer Coolidge – Her Comeback Is a Powerful Lesson

Indeed, after the film premiered at the Venice International Film Festival on September 4, 2022, Fraser received a six-minute standing ovation that nearly brought him to tears. As he later told Variety, “I was emotional because it was acknowledgment that what we did is making an impact. And that kind of response feels completely new in my professional life.”

When asked about his lengthy hiatus, Fraser said he needed that time to arrive at where he is today. “I know that the time I needed to take for personal reasons and for family reasons was all time well spent,” he said.

What’s more, he pointed out that he never actually stopped working, no matter how difficult his life was off-screen. “I’ve always done something every year,” he told the mag. “No matter what it was, I never thought about giving it up. I’m an actor. I don’t know what else I would do.”

Fraser Steps Out With His New Girlfriend Looking Happier Than Ever

Now, it’s not just his professional life that’s thriving – his personal life is also blossoming. While attending the Venice International Film Festival, Fraser made his red carpet debut with a new girlfriend, Jeanne Moore. Since then, she’s been right by his side, offering her love and support at the movie’s UK premiere, as well as at The Whale screening at the Mill Valley Film Festival in San Rafael, California.

While the pair has kept mum about their relationship, what we do know about Moore is that she’s an accomplished makeup and hair artist. According to her website, she works on everything from films to weddings and is even certified in special effects makeup. Based in Calabasas, California, she has worked with folks from all walks of life, including celebs like Billy Blanks, Paula Abdul, and Marie Osmond.

A Valuable Lesson From Brendan Fraser

Even as he stepped away from huge blockbusters to deal with personal trauma, the actor continued to find fulfillment in smaller roles. As he told Variety, the goal shouldn’t be public praise but rather personal gratification because it could all be gone in a flash. “I’m still expecting somebody to walk over to me, hand me a dish towel and say, ‘Fraser, get back in the kitchen,’” he quipped.

However, the biggest lesson Fraser can teach us all is that, regardless of age, you can overcome hardship and you can find joy and success after darkness.

What Happened to Carrie Anne Moss? The Matrix Actress Who Is Making a Comeback