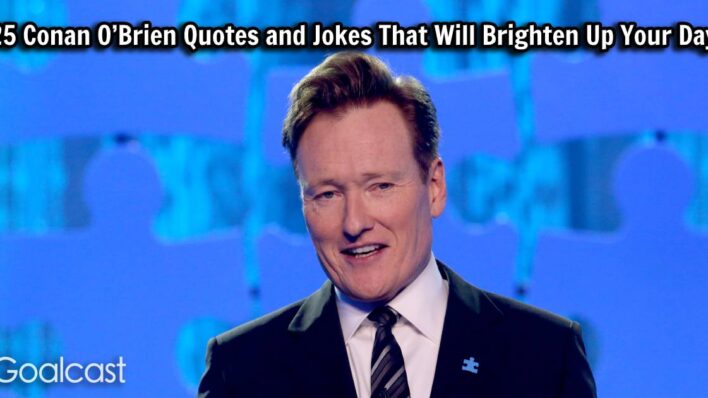 Conan O’Brien is an American writer, producer and comedian, best known for hosting multiple late-night talk shows.Here are 25 Conan O’Brien quotes and funny jokes that will brighten up your day.
By Flavia Medrut    October 16, 2020

Conan O’Brien is an American writer, producer and comedian, best known for hosting multiple late-night talk shows.Here are 25 Conan O’Brien quotes and funny jokes that will brighten up your day.

Conan developed a love for comedy as a young boy and rapidly turned into a master at pulling off pranks. The fact that he entered the prestigious Harvard University didn’t stop him from goofing around. In fact, being funny served him quite well as the comedian was elected president of the Harvard Lampoon for an unprecedented two consecutive terms.

O’Brien’s career took off when he began writing for the Saturday Night Live. He later wrote for the animated sitcom The Simpsons and eventually became a supervising producer of the series.

In 1993, Conan was hired to fill the vacant time slot at NBC, after David Letterman moved to host for another network. He left the Late Night with Conan O’Brien in 2009 and took over as host of The Tonight Show. Ever since 2010 he’s been hosting the talk-show Conan on the cable station TBS.

The comedian is considered one of America’s smartest celebrities and the longest-working of all current late-night talk-show hosts.

Here are 25 Conan O’Brien quotes and funny jokes that will brighten up your day:

Nobody in life gets exactly what they thought they were going to get. But if you work really hard and you’re kind, amazing things will happen.

Disappointment leads to clarity, which leads to conviction and true originality.

It is our failure to become our perceived ideal that ultimately defines us and makes us unique. It’s not easy, but if you accept your misfortune and handle it right your perceived failure can become a catalyst for profound re-invention.

There are few things more liberating in life than having your worst fear realized.

A study in the Washington Post says that women have better verbal skills than men. I just want to say to the authors of that study: ‘Duh!’

All I ask is one thing, and I’m asking this particularly of young people: please don’t be cynical. I hate cynicism, for the record, it’s my least favorite quality and it doesn’t lead anywhere.

According to a recent survey, kids are receiving an average of 40 cents less from the tooth fairy. That’s right, the economy is so bad that even make-believe people are feeling the pinch.

There are few things more liberating in this life than having your worst fear realized. … Your path at 22 will not necessarily be your path at 32 or 42. One’s dream is constantly evolving, rising and falling, changing course.

Success is a lot like a bright, white tuxedo. You feel terrific when you get it, but then you’re desperately afraid of getting it dirty, of spoiling it in any way.

Fall down. Make a mess. Break something occasionally. Know that your mistakes are your own unique way of getting to where you need to be. And remember that the story is never over.

Scientists announced that they have located the gene for alcoholism. Scientists say they found it at a party, talking way too loudly.

Just taught my kids about taxes by eating 38% of their ice cream.

A group of psychologists say they have discovered twenty-three different body language indicators that show whether or not a person is lying. If you would like to see all twenty-three at the same time, they recommend taking a guided tour of the White House.

Scientists say they’re getting closer to developing a pill to replace exercising. Americans heard this and said that it better come in cool ranch flavor.

Nobody knows really what they’re doing and there’s two ways to go with that information. One is to be afraid and the other is to be liberated, and I choose to be liberated by it.

Ukraine announced plans to open Chernobyl, their nuclear disaster site, to tourists. They say it’s just like Disneyland, except the 6-foot mouse is real.

In the press this week, NBC has been calling me every name in the book. In fact, they think I’m such an idiot they now want me to run the network.

Among the top Google searches of 2014 were Ebola and the movie ‘Frozen.’ One leaves you with something highly infectious that’s impossible to get out of your system. The other is Ebola.

Did you hear this big scandal? Eight female badminton players were expelled from the Olympics for trying to lose on purpose. So tragically, they’ll never have another chance to play badminton unless they get invited to a picnic.

Being a Dad is the greatest, except for assembling things.