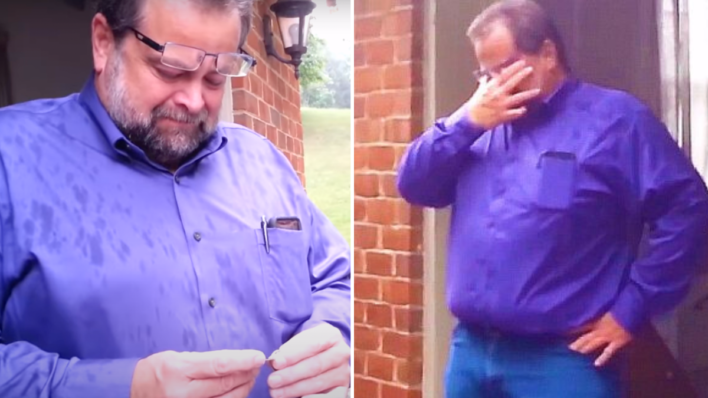 Dad Sells Car to Pay For Daughter’s School – Years Later, She Hands Him Something That Brings Him to Tears

One father who devoted his life to his daughter received the warmest surprise of his life from her in return.
By Bryan Liquor    April 28, 2022

One father who devoted his life to his daughter received the warmest surprise of his life from her in return.

As a young boy, 16-year-old Randy Martin’s first love was his prized car – a 1936 Ford Sedan he restored by himself, including a crisp white paint job.

The two traveled long and far on many adventures, even earning several first-place trophies at local car shows.

Yet, times change and Martin eventually started a family, which meant setting smart goals. While he cherished his ride, his main motivation was his daughter Stephanie, and giving her the best of the world, including an education.

And so, when she wanted to enroll in seminary school, Martin stepped up to pay for his little girl’s tuition.

However, it came at a painful price: selling his cherished white Ford Sedan. Hamren wrote that while out of sight, her dad’s car was never out of mind.

My dad talked about this car for as long as I can remember, always saying he would buy it back if he could find it.

Little did Martin know, his daughter never forgot either.

Those memories would simmer for about 20 years when one day, Hamren, all grown up and graduated, set out to find her father’s white whale on wheels.

She first created a GoFundMe page to help with the costs of buying and for any repairs. She then scoured the country for the 1936 Ford Sedan.

RELATED: Dad Witnesses 10-Year-Old Daughter Being Hit By A Car- Immediately Reacts In An Unexpected Way

Hamren’s search took her halfway across the country, where she found the owner in New Orleans. She then secretly bought and shipped the car back home. Meanwhile, her mother also kept everything a secret while the plan was carefully set in motion.

Finally, with the plan in place, it was time for the grand reveal. With the family paparazzi crowded in front, Martin was lured to a reunion twenty-one years in the making.

If a picture’s worth a thousand words, a moment is worth a million.

Watching a shocked, teary Martin come face-to-face with his cherished car – a symbol of his youth, family and sacrifices – was priceless.

Hamren was just relieved that her plan was a success.

RELATED: Woman Traveling Alone Is Distressed When Car Breaks Down Late At Night – Then, 3 Teens Stop Next To Her

Finding the car, getting the money, and getting it halfway across the U.S. with no problems is truly a blessing.

At that moment, Martin could only muster three words “What’s this for?” For Stephanie, the answer is just one: Everything.

For their princess, a father is protector, provider and even their Superman. It’s something time will never change. Nor does a daughter’s bond with their father. And you can bet that when they have a chance to express just how much they mean to them, they’ll travel the world over to show it.

cherish your loved ones
“Being a family means you are a part of something very wonderful. It means you will love and be loved for the rest of your life.” — Lisa Weed