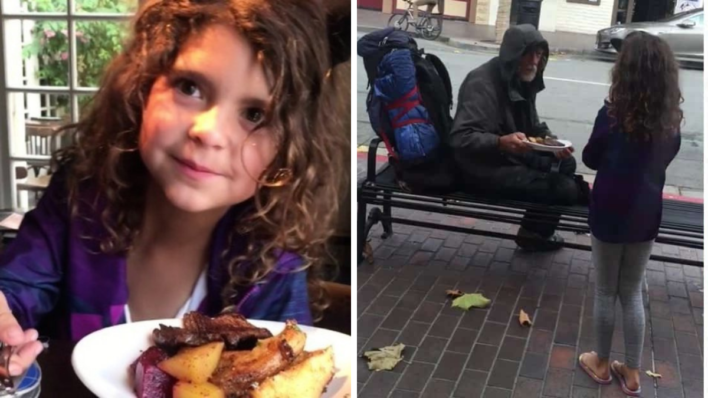 One little girl’s spontaneous act of kindness created a life-changing chain of events.

The internet definitely has its downsides, but it can also be a wonderful thing with the ability to reunite people who have long been lost to one another. When one little girl’s wonderful act of kindness went viral on social media, it unexpectedly reunited two siblings.

Ella Scott of Monterey, California, noticed a homeless man sitting alone while she was eating with her father at a restaurant called Lallapalooza. Upon seeing him, she thought that he looked hungry, so she decided to take her plate -piled high with steak and potatoes- outside and give it to the man. The man, later identified as veteran David Salkowski, was thrilled to see the little girl offering him food. Even though he was missing two front teeth, David was able to cut the food provided to him into small pieces and enjoy it.

Ella’s father, 38-year-old Eddie Scott, took a video of the exchange between Ella and David and posted it on Facebook. The post went viral and was shared more than 44 million times. One of the people who saw the video ended up bring David’s sister, Roseanne Salkowski. She tearfully called up Eddie Scott and explained to him that her 62-year-old brother was a veteran suffering from PTSD, and he had not been heard from by his family in over six months, which is when he abruptly decided to leave Philadelphia. This amazing turn of events inspired both Eddie and Ella Scott, who decided to make it their mission to reunite more long-lost siblings.

Ella has always had a big heart, whenever we pass homeless people on the street, she always asks me for money to give to them.

When little Ella decided to share her meal with David, neither she nor her father knew that they could potentially change two people’s lives forever- but they did! This is a lesson for all of us. You never know what sort of chain reaction your small acts of kindness can have. Just because something you do doesn’t go viral, doesn’t mean it doesn’t have an impact that changes the world.