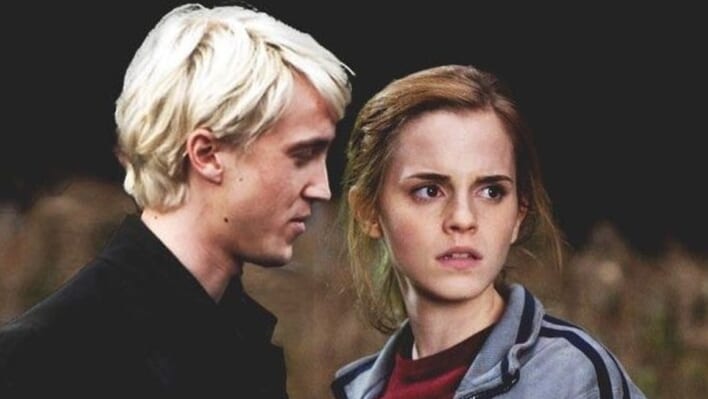 The Harry Potter villain is coming clean about grave mistakes from his past, the hardest decision he’s ever made, and what Emma Watson did to empower him at his lowest.
By Shaoni Das    November 11, 2022

The Harry Potter villain is coming clean about grave mistakes from his past, the hardest decision he’s ever made, and what Emma Watson did to empower him at his lowest.

For a long time, fans have wondered why the Harry Potter heartthrob has been missing from action, falling behind when his co-stars continue to thrive in film or TV. Is he just a washed-up actor from a beloved franchise? Or has he already achieved everything he wanted and no longer faced the financial incentive to work? Perhaps he’s going through what many former child actors go through: drug dependencies, legal troubles, and mental breakdowns?

Tom Felton has opened up recently about a painful period of his life that nearly cost him everything. In his new memoir, Beyond the Wand: The Magic and Mayhem of Growing Up a Wizard, Felton details the battles he’s been fighting behind the scenes and why it’s taken him so many years to acknowledge them in public.

His journey presents an emotionally relevant lesson about discovery, accountability, and growth.

There is no denying the Harry Potter universe delivered many opportunities for Felton and his peers, but, at the same time, it also paved the way for numerous vices. Sadly, when you’re young and have access to all the money in the world and very few people to keep you grounded, you tend to follow your worst impulses, as Felton found out the hard way.

By the time he was in his mid-twenties, Felton revealed, he was an alcoholic. “I went from being not particularly interested [in drinking] to regularly having a few pints a day before the sun had even gone down,” he wrote in his memoir. Though he did do a few movies after Harry Potter, such as Rise of the Planet of the Apes, he was starting to feel disillusioned with the businesses as well as his own celebrity.

Furthermore, living in Los Angeles was becoming more and more tedious as time went on. “There’s no doubt that LA made me feel particularly lonely and disassociated from myself,” he noted.

To restore a sense of normalcy in his day-to-day, Felton discovered a dive bar called Barney’s Beanery, which he started frequenting at an alarming speed. The situation escalated rapidly, to the point that Felton’s representation, including his legal team, PR, and agency, hosted an intervention for him with one ultimatum: get better, or we’ll drop you. His lawyer, who he hadn’t known too well at the time of the intervention, had reportedly said, “All I want to tell you is that this is the seventeenth intervention I’ve been to in my career. Eleven of them are now dead. Don’t be the twelfth.”

Though Felton did commit to a plan, he ended up breaking out of rehab within 24 hours, escaping via foot along the Malibu coastline, “I was muddy, wet, disheveled, and broken,” he wrote. “I must have looked like a complete maniac. I certainly felt like one.” With no money on him and no place to stay, he sought help from a gas station, which gave him a bottle of water and $20. After that, he headed straight to Barney’s, drank, and spent the night at a bartender’s home. Though this rehab stint was woefully short, it had brought some clarity. As a result, the Surrey native decided to make some long-awaited changes. He broke up with his girlfriend, moved to Venice Beach, adopted a dog, and started volunteering. For years, his life was “better than ever.”

His Recurring Alcoholism, ‘Escape’ Out of Rehab, and Feeling Like a Maniac

A few years later, “the numbness returned with no particular trigger,” and Felton found himself falling off the wagon. He checked into rehab yet again, something he described as one of the “hardest decisions” of his life. However, being able to acknowledge the severity of his situation and then take the necessary measures to mitigate it takes courage. It was an “important moment,” and Felton is proud to have done what he did.

Today, the 35-year-old is shedding light on the necessity of mental health awareness and being honest with how you’re doing. He experienced firsthand how quickly his glamorous lifestyle descended into a wretched existence, while no money in the world could keep him from his declining state of mind. Everyone in the university suffers from unhealthy urges — whether they’re related to substances, violence, or sex — but instead of pretending they don’t exist, we need to come to terms with them and recognize what may trigger them.

How Emma Watson Provided The Strength To Speak His Truth

As Felton tells his story, which is a challenging enough endeavor, he also remembers the advice given to him by his Harry Potter co-star and long-term friend Emma Watson. In fact, it was Watson who instructed him not to hold anything back. If his supporters have been rooting for him from day one, they deserve to be told the truth, the whole truth, and nothing about the truth.

“There’s obviously gonna be trepidation about sharing that with the world. [Watson] was a massive influence to say, ‘No, put it all out there. Trust yourself. People will really connect with this.’” She inadvertently played a crucial role in his recovery and in helping him process everything that’d happened to him over the last couple of years. He’s on a mission to raise awareness of what it means to care for your mental health and how you can better manage your moods during trying circumstances.

RELATED: How Jennifer Aniston Saved Matthew Perry From Death With One Question

Felton is still reeling from the consequences of his bad behavior, but he’s not ashamed of his past. On the contrary, it only fuels his purpose and reminds me to keep living a healthy, peaceful, and balanced life. Now, he knows himself a little better and knows when to stand up and seek help. “I’m no longer shy of putting my hands up and saying: I’m not okay.”

Tom Felton’s journey over the past couple of years teaches us about the value of taking responsibility. Of course, everyone will make mistakes and slip into bad habits, but as long as we’re aware of our actions and hold ourselves to specific moral standards, we can shoulder whatever comes our way. Sometimes you’ll hurt other people, and sometimes you’ll hurt yourself, but if you’re mindful of your responsibilities, there will always be light at the end of the tunnel.