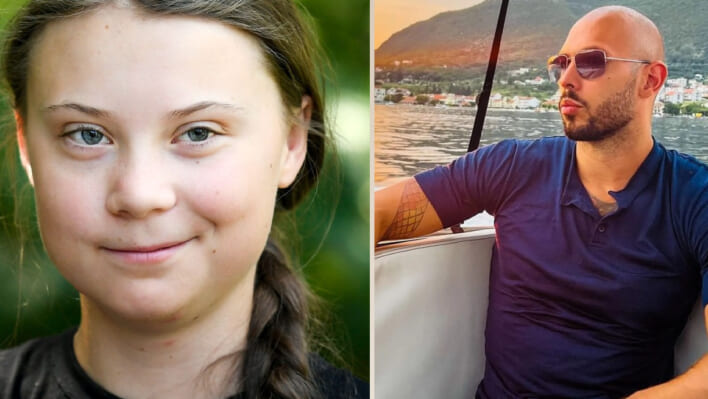 He may have kicked and punched a lot of people over the course of his fighting career, but Tate never delivered a knockout blow with the precision and strength of Thunberg’s words.

Known not only as a climate activist, the 19-year-old is known for her quick wit and simple and efficient way to take down detractors. Even President Trump felt her quips.

Before we get to the flex gone bad and the comeback that burned with a fury, let’s take a moment to put these two ideological opposites on the map.

Who Is Greta Thunberg?

Greta Thunberg was born in 2003 and is Swedish by birth. Today Thunberg is effectively a citizen of the world, and has devoted her life’s work and earned global acclaim for climate and environmental activism.

Thunberg rose to fame in September of the year 2018 after staging a multi-week protest against climate change: she sat outside the Swedish parliamentary building holding a sign that read “School Strike for Climate.” Despite protesting alone on the first day of the strike, Thunberg was joined by more and more people each day and soon drew international attention. Then 15 years old, Thunberg rapidly became the face of the movement against climate change.

RELATED: Greta Thunberg Stands Up to Her Critics — and Explains Her “Superpower”

By 2019, at only16 years old, Greta Thunberg was declared the TIME “Person of the Year.” In an interview granted on that occasion, she said in part: “We can’t just continue living as if there was no tomorrow, because there is a tomorrow.”

Evidently, no one ever told that fact to Andrew Tate.

Who Is Andrew Tate?

At nearly twice her age, Andrew Tate is 36 years old. A former kickboxer, the British-American Tate today operates Hustler’s University, a thinly-veiled pyramid scheme with an About page reading in part: “We are a community of ambitious and driven individuals who are committed to achieving success in all aspects of life. Whether you are looking to advance in your career, start a business, or simply improve yourself, we have the resources and support you need to reach your goals.”

RELATED: How Andrew Tate Became the “Scariest Man on the Internet”

Tate has a history of making homophobic and racist comments online, on TV (he was briefly on the show Big Brother before being removed after a purported sexual assault came to light), and in person. He is a misogynistic braggart who, as a sign of our times, has achieved even greater fame and wealth for his “alpha male” persona. All that only makes it all the sweeter that this 6’3” former fighter was effectively taken down by a young woman who stands just shy of five feet tall.

The Tweet Tate Posted and the Thundering Clap Back from Thunberg

For a reason only known to Tate, who boasts 3.4 million followers on Twitter, he posted a Tweet that showed him putting gasoline into a sportscar with the words: “Hello @GretaThunberg I have 33 cars. My Bugatti has a w16 8.0L quad turbo. My TWO Ferrari 812 competizione [sic] have 6.5L v12s. This is just the start. Please provide your email address so I can send a complete list of my car collection and their respective enormous emissions.”

When Tate fired the shot at Thunberg, he started a duel he was quickly destined to lose. And set into motion a public takedown and subsequent arrest.

Greta Thunberg’s 5.1 million-plus Twitter followers vastly outnumber Tate’s, and thanks to the multiplying power of social media, her hit back at Andrew Tate was seen by many millions more than that. To the self-proclaimed “Light-Heavyweight Kickboxing World Champion” Thunberg, who self-identifies as an “Autistic climate justice activist” on Twitter, posted back: “yes, please do enlighten me. email me at smalldickenergy@getalife.com”

Tate used nearly 50 words and a picture to try to flex; Thunberg replied with nine words. And she utterly destroyed the former kickboxer…in more ways than one.

How the Bully Lost to the Activist

There’s nothing better than a great comeback in a war of words. In the case of the Tate-Thunberg face-off, Thunberg won many times over. She won first with a clever and humorous takedown of Tate after he singled her out for reasons unknown (clearly the Tweet was less about climate or Thunberg than it a wealth brag).

RELATED: Why We Need To Shift The Conversation On Chrissy Teigen’s Cyberbullying Behavior

But the real victory goes to Thunberg because after her clap back at Tate, she moved on. The 19-year-old Thunberg has said little about Tate since the exchange, whereas the 36-year-old man has Tweeted about her some half-dozen times, even making a video about the exchange.

Unfortunately, the video Tate posted led to the ultimate takedown – his arrest by Romanian police. In the video exchange, Tate was shot smoking a cigar, making disparaging remarks about Thunberg and his refusal to recycle the pizza boxes sitting in front of him. And that’s all the Romanian police needed to prove that Tate was in the country. Tate and his brother were arrested on human trafficking charges.

Thunberg’s response? “This is what happens when you don’t recycle your pizza boxes.”

It’s not always easy to take the higher road when provoked by bullies. But a little humour, a simple message, and the wisdom of when to walk away is the best revenge.