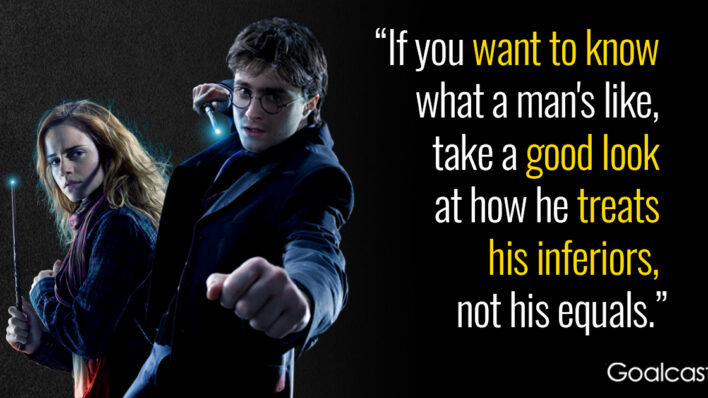 Harry Potter is a name that makes you take a break from reality and travel to a magical land. By
By Flavia Medrut    March 2, 2018

Harry Potter is a name that makes you take a break from reality and travel to a magical land. By combining fantasy, drama, mystery, thriller, adventure, horror, and romance, J. K. Rowling created a masterpiece suitable for all ages.

The Harry Potter franchise enjoyed an immense popularity ever since it was released and adapted to the big screen, with actors like Emma Watson and Daniel Radcliffe bringing the book’s characters to life.

Since the first book was released in 1997, Harry Potter became the best-selling book series in history. The books have been translated into eight languages and have sold more than 500 million copies worldwide.

From appearance to personality, each character is carefully developed, and each adventure teaches readers about life choices and facing difficult situations.

Harry Potter is not only about wizards, potions and magical creatures, but also about love, friendship, honor, challenges and being prepared for whatever may come. (And it’s also about funny moments sometimes!) Here are 100 famous Harry Potter quotes to teach you some valuable lessons in life.

Many lines from Harry Potter are absolutely hilarious. Some witty, some said with a large dose of sarcasm, here are the best Harry Potter quotes. Enjoy!

I hope you’re pleased with yourselves. We could all have been killed – or worse, expelled. Now if you don’t mind, I’m going to bed.

I know some things. I can, you know, do math and stuff.’

Harry then did something that was both very brave and very stupid.

Funny way to get to a wizards’ school, the train. Magic carpets all got punctures, have they?

Troll — in the dungeons — thought you ought to know.

Training for the ballet, Potter?

Of all the trees we could’ve hit, we had to get one that hits back.

Hearing voices no one else can hear isn’t a good sign, even in the wizarding world.

’Do I look stupid?’ snarled Uncle Vernon, a bit of fried egg dangling from his bushy mustache.

Honestly, if you were any slower, you’d be going backward.

I’ll be in my bedroom, making no noise and pretending I’m not there.

Harry: Probably that you’re going to be eaten by a giant marshmallow or something,

Longbottom, if brains were gold, you’d be poorer than Weasley, and that’s saying something.

Just because it’s taken you three years to notice, Ron, doesn’t mean no one else has spotted I’m a girl!

I am a wizard, not a baboon brandishing a stick.

He can run faster than Severus Snape confronted with shampoo.

Anyone can speak Troll. All you have to do is point and grunt.

Just because you have the emotional range of a teaspoon doesn’t mean we all have.

Fine! Go naked. And, Harry, make sure you get a picture of him. Goodness knows I could do with a laugh.

Yeah, Quirrell was a great teacher. There was just that minor drawback of him having Lord Voldemort sticking out of the back of his head!

Once again, you show all the sensitivity of a blunt axe.

Vernon: ‘Listening to the news! Again?’

Harry: ‘Well, it changes every day, you see.’

Well, honestly… ‘the fates have informed her’… who sets the exam? She does! What an amazing prediction!

Filled with so much adventure, friendship and love, the Harry Potter novels/movies have inspired millions of people of all ages. Below you’ll find some of the most inspirational Harry Potter quotes.

We’re all human, aren’t we? Every human life is worth the same, and worth saving. If you want to know what a man’s like, take a good look at how he treats his inferiors, not his equals.

You sort of start thinking anything’s possible if you’ve got enough nerve.

When in doubt, go to the library.

Time will not slow down when something unpleasant lies ahead. Things we lose have a way of coming back to us in the end, if not always in the way we expect.

What’s life without a little risk?

Dumbledore says people find it far easier to forgive others for being wrong than being right.

Yeah, size is no guarantee of power.

It is the quality of one’s convictions that determines success, not the number of followers.

We’ve all got both light and dark inside us. What matters is the part we choose to act on. That’s who we really are.

You’re just as sane as I am.

We can’t choose our fate, but we can choose others. Be careful in knowing that.

Fame is a fickle friend, Harry. Celebrity is as celebrity does. Remember that.

Don’ you worry, Harry. You’ll learn fast enough. Everyone starts at the beginning at Hogwarts, you’ll be just fine. Just be yerself.

I’m going to keep going until I succeed — or die. Don’t think I don’t know how this might end. I’ve known it for years.

Yes, but the world isn’t split into good people and Death Eaters.

The mind is not a book, to be opened at will and examined at leisure. Thoughts are not etched on the inside of skulls, to be perused by an invader. The mind is a complex and many-layered thing.

And he knew that at that moment, they understood each other perfectly, and when he told her what he was going to do now, she would not say ‘be careful’ or ‘don’t do it’, but she would accept his decision because she would not have expected anything less of him.

I am what I am an’ I’m not ashamed. ‘Never be ashamed,’ my ol’ dad used ter say, ‘there’s some who’ll hold it against you, but they’re not worth bothern’ with.’

What’s comin’ will come, an’ we’ll meet it when it does.

Your devotion is nothing more than cowardice. You would not be here if you had anywhere else to go.

Never trust anything that can think for itself if you can’t see where it keeps its brain.

You can laugh, but people used to believe there were no such things as the Blibbering Humdinger or the Crumple-Horned Snorkack!

Anyone who has read the books or watched the movies, knows that Harry wouldn’t have survived Lord Voldemort’s attack if it weren’t for his mother’s love.

Here are some of the best Harry Potter quotes about love:

When you have seen as much of life as I have, you will not underestimate the power of obsessive love.

What do I care how he looks? I am good-looking enough for both of us, I theenk! All these scars show is zat my husband is brave!

You are protected, in short, by your ability to love!

Dumbledore would have been happier than anybody to think that there was a little more love in the world.

The ones that love us never really leave us. You can always find them, in here.

It is impossible to manufacture or imitate love.

Love as powerful as your mother’s for you leaves it’s own mark. To have been loved so deeply, even though the person who loved us is gone, will give us some protection forever.

Friendship is at the core of Harry Potter novels. Every adventure described in the books teaches us about the importance of loyalty between friends, about how important it is to have people to rely on and others being able to rely on you.

You’re the weak one… And you’ll never know love or friendship… And I feel sorry for you.

There are some things you can’t share without ending up liking each other, and knocking out a twelve-foot mountain troll is one of them.

Books! And cleverness! There are more important things — friendship and bravery.

Then you should have died! Died, rather than betray your friends, as we would have done for you.

We’re with you whatever happens.

Dobby has never been asked to sit down by a wizard — like an equal.

You need your friends, Harry.

We did it, we bashed them, wee Potter’s the one. And Voldy’s gone moldy, so now let’s have fun!

You’re a little scary sometimes, you know that? Brilliant… but scary.

No, Harry, you listen. We’re coming with you. That was decided months ago — years, really.

And Percy was shaking his brother, and Ron was kneeling beside them, and Fred’s eyes stared without seeing, the ghost of his last laugh still etched upon his face.

Harry: You’ll stay with me?

James: Until the very end,

And that’s the second time we’ve saved your life tonight, you two-faced bastard!

You will also find that help will always be given at Hogwarts to those who ask for it.

I enjoyed the meetings, too. It was like having friends.

What a beautiful place to be with friends. Dobby is happy to be with his friend.

No, I think you’re like James, who would have regarded it as the height of dishonor to mistrust his friends.

Albus Dumbledore is one of the most beloved characters from J. K. Rowling’s Harry Potter. Powerful and confident, yet not arrogant; always looking for peace, but never afraid to confront evil — the old wizard has conquered the hearts of all Harry Potter fans.

Check out the following Dumbledore quotes that are filled with words of wisdom. Do not pity the dead, Harry. Pity the living, and, above all those who live without love.

Understanding is the first step to acceptance, and only with acceptance can there be recovery.

Fear of a name increases fear of the thing itself.

People find it far easier to forgive others for being wrong than being right.

Youth cannot know how age thinks and feels. But old men are guilty if they forget what it was to be young.

It is a curious thing, Harry, but perhaps those who are best suited to power are those who have never sought it.

It does not do to dwell on dreams and forget to live.

Indifference and neglect often do much more damage than outright dislike.

We are only as strong as we are united, as weak as we are divided.

Happiness can be found, even in the darkest of times, if one only remembers to turn on the light.

Differences of habit and language are nothing at all if our aims are identical and our hearts are open.

It is important to fight and fight again, and keep fighting, for only then can evil be kept at bay though never quite eradicated.

Dark times lie ahead of us and there will be a time when we must choose between what is easy and what is right.

The truth… It is a beautiful and terrible thing, and should therefore be treated with great caution.

It’s the unknown we fear when we look upon death and darkness, nothing more.

Words are, in my not-so-humble opinion, our most inexhaustible source of magic. Capable of both inflicting injury, and remedying it.

Numbing the pain for a while will make it worse when you finally feel it.

The best of us sometimes eat our words.

Age is foolish and forgetful when it underestimates youth.

Sadly, accidental rudeness occurs alarmingly often. Best to say nothing at all, my dear man.

To the well-organized mind, death is but the next great adventure.