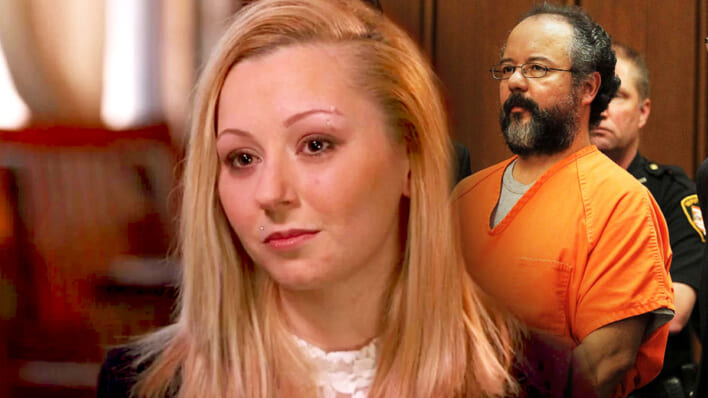 Ariel Castro kidnapped three women from 2002 to 2004, holding them captive for nearly a decade. Then, Amanda Berry’s act of bravery that ended their torment. But where are Castro’s former victims now?
By Bianca Mercuri    July 15, 2022

Ariel Castro kidnapped three women from 2002 to 2004, holding them captive for nearly a decade. Then, Amanda Berry’s act of bravery that ended their torment. But where are Castro’s former victims now?

The Ariel Castro kidnappings received some of the widest media coverage seen to date. Following an exhaustive, 10-year hunt for three missing women, they were found alive, due to the quick thinking and determination of one of the victims.

When Amanda Berry made her fateful escape on May 6, 2013, she saved the lives of four people, and attracted the attention of millions around the globe.

This case is a beacon of hope in true crime, allowing families to keep their faith alive while following the cases of other missing people.

But, what took place in their decade of captivity, who are the women held captive, and what were the days like that led up to their escape and rescue?

The Kidnappings of Ariel Castro

Ariel Castro kidnapped three women over the course of two years. Between 2002 and 2004, he lured Michelle Knight, Amanda Berry and Georgina “Gina” DeJesus into captivity. The kidnappings took place in Cleveland, Ohio, at Castro’s home in the Tremont neighborhood.

RELATED: How the Horrifying Murder of Adam Walsh Changed a Generation of Parents

Castro was no stranger to horrific decisions. He worked as a bus driver for the Cleveland Metropolitan School District before his termination for “bad judgment.” The citations included making illegal U-turns with children on the bus, and leaving a child alone while he went home to nap. The latter allegation of child abuse and neglect was determined to be “unsubstantiated.”

Castro had two daughters, Emily and Arlene, who he allegedly used in the search for his victims. Both Amanda Berry and Gina DeJesus went to school with his daughters, providing him with a veil of credibility.

Ariel Castro was able to kidnap his victims by offering them rides home. But rather than drive them to their homes, he took them to 2207 Seymour Ave., commonly known as the “House of Horrors.”

Over the next nine years, Castro physically and sexually abused Berry, Knight and DeJesus. The three women experienced a living nightmare, trapped in their personal hell. Their bond was the only thing that held them together during their unimaginable torment.

Castro impregnated Knight multiple times, but terminated each pregnancy. When Berry discovered she was pregnant, the women were shocked that Castro wanted to keep the child.

On Christmas 2006, Berry gave birth to her daughter in an inflatable pool, with Knight’s help. It was this child that spearheaded the hunt for an escape, and fueled their desire to live.

The Survivors of Ariel Castro

Michelle Knight was the first victim. She disappeared on Aug. 23, 2002, at age 21. On the day of her disappearance, Knight had a scheduled court appearance for a child-custody case involving her son Joey. While Knight arguably received the worst treatment of the three women, she was also severely neglected by the system.

READING: How a 24-Year-Old Victim Became the Hero Who Stopped the Real ‘Dirty John’ Meehan

Because she was an adult, authorities presumed she had simply run away and, therefore, didn’t devote time or resources to searching for her. Knight suffered a minimum of five pregnancies and terminations, as well as horrific physical abuse.

Amanda Berry disappeared on April 21, 2003, the day before her 17th birthday. She had called her sister at about 8 p.m. to say she was getting a ride home from her fast-food job. However, she never made it home. It wasn’t long until Castro impregnated Berry and insisted she have the child.

Once the child was born, Berry’s will to survive heightened. She was determined to free herself and her daughter. It was the love for her daughter and her extreme bravery that ended up saving four innocent lives.

RELATED: After the Capture: Where Is Kidnapping Victim Elizabeth Smart 19 Years After Being Rescued?

Gina DeJesus was the last of Castro’s victims. She went missing on April 2, 2004, at only 14 years old. When Castro, the father of her two friends, offered DeJesus a ride home from middle school, she didn’t hesitate to accept.

There was a lot of frustration following DeJesus’ disappearance. No Amber Alert was issued, and police were quick to write her off as a runaway. However, DeJesus’ mother and cousin weren’t willing to give up, and spent years searching for the missing teen. The investigation garnered attention when DeJesus was featured in an America’s Most Wanted segment. Police kept the investigation open, and offered a $25,000 reward for any information that led to her discovery.

Amanda Berry’s Act of Bravery Led to Their Rescue

On May 6, 2013, Berry escaped Castro’s home, and made contact with his neighbors, who, in turn, called police. Castro had failed to lock the inside door, although the storm door was bolted shut. Berry screamed for her life after seeing neighbors Charles Ramsey and Angel Cordero in the distance. They quickly came to the rescue, kicking a hole through the storm door where Berry crawled out holding her 6-year-old daughter.

Berry was taken to a nearby home, where they made the 911 that, by now, has been near by millions. “Help me. I’m Amanda Berry,” Berry told the operator. “I’ve been kidnapped, and I’ve been missing for 10 years. And I’m here. I’m free now!” Responding police officers entered Castro’s house, where they discovered Knight and DeJesus. All three women and Berry’s child were taken to the hospital, and then reunited with their families.

What Happened to Ariel Castro?

Ariel Castro was arrested that same day, and initially charged with four counts of kidnapping and three counts of rape. Additional charges were added following his initial court appearance, including aggravated murder for the intentional induction of miscarriages, child endangerment, possession of criminal tools, and gross sexual imposition. In total, Castro faced 977 charges, for which he could face death by lethal injection.

RELATED: How True Is Netflix’s Monster to the Real Jeffrey Dahmer Story?

However, Castro pleaded guilty to 937 of the counts against him, and in exchange would would serve consecutive life sentences, plus 1,000 years. As part of the plea deal, he forfeited all of his assets, including 2207 Seymour Ave., plus any right to appeal or, in any way, profit from his crimes.

However, one month into his sentence, Castro committed suicide by hanging himself with a bed sheet in his cell. He was 53 years old.

Michelle Knight, Amanda Berry and Georgina “Gina” DeJesus have had to learn to heal from the trauma of their horrific experience.

Since her rescue, Knight legally changed her name to Lily Rose Lee. She also disclosed that, during her captivity, her son was adopted by his foster parents. In 2016, she married Miguel Rodriguez, whom she describes as “the love of my life … my other half.”

“When I first came out of the house, I didn’t even know what love was,” she told ABC News in 2020. “What a tender touch was. All I knew was abuse.”

She went on to found Lily’s Ray of Hope, a nonprofit organization dedicated to helping victims of child abuse, domestic violence and human trafficking.

Berry and DeJesus were finally able to finish high school, and have gone on to work closely with families of missing and endangered children.

In 2017, Amanda Berry joined WJW, a Fox TV affiliate, where she hosted short, recurring segments for missing-person cases. By 2020 she partnered with U.S. marshals for Operation Safety Net, an organization that has located 35 missing and abducted children.

Berry was honored in 2022 with the 69th Annual Attorney General’s Award, in recognition for her help in recovering missing children.

Gina DeJesus has devoted much of her time to assisting those who have missing loved ones. She volunteers for the Amber Alert committee, and uses her story to help other missing and abducted children. In 2021, she spoke at CrimeCon to a standing ovation.

RELATED: Netflix’s Devil in Ohio Is Based on a True Story – But Which One?

In 2018, DeJesus opened the Cleveland Family Center for Missing Children and Adults, not far from the house where she, Berry and Knight were once held captive.

“I feel like why should I run from Cleveland,” she told WOIO TV in 2022. “If I can’t do it here, why would I be able to do it somewhere else and if I can do it here, especially on West 25th and Seymour, right where I was held captive. If I can be on that street then so can anyone else.”

What Happened to Ariel Castro’s ‘House of Horrors’?

The house at 2207 Seymour Ave., where Castro held all three women, was demolished on Aug. 7, 2013, ending any physical reminder of what happened there. At the demolition, Knight handed out yellow balloons representing missing children around the world. The balloons were released before the first swing of the crane.

This is a tale of survival, a tale of tenacity, and of justice. These three women had their young lives stolen, and were subjected to some of the most heinous crimes a person can endure. Their upstanding character and strength shine through with their ability to wake up every morning and choose to live their lives unapologetically.