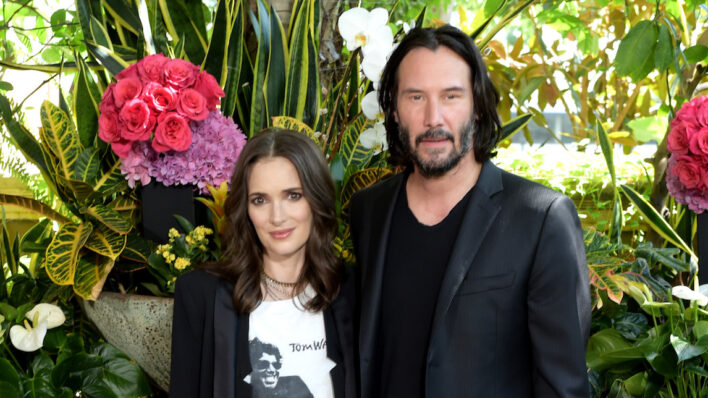 It’s not like the internet needed more reasons to love Keanu Reeves. Nonetheless, actresss Winona Ryder has provided another one.
By Flavia Medrut    July 28, 2020

It’s not like the internet needed more reasons to love Keanu Reeves. Nonetheless, actresss Winona Ryder has provided another one.

In addition to being an accomplished actor, Keanu Reeves is also a genuinely good person. The internet is full of articles and images that prove Keanu’s kindness, politeness and generosity.

As you probably know, the star is no stranger to loss, grief and death. In fact, he has taken some serious hits and it’s quite amazing to still see him smiling at everyone, despite all that.

Throughout the years, he’s earned the respect of fans and many A-list actors and not surprisingly, he’s one of Winona Ryder’s favorite people.

The two met in the late 80s and their friendship got stronger when they worked together for the movie Dracula (1992). Winona actually helped Keanu in receiving his role. Almost three decades later, the actress recalls how Keanu was the one really helping her during filming.

But before talking about what the actor did for his former co-star, we thought we’d mention some of his most iconic moments that have solidified his reputation and warmed the hearts of everybody.

Keanu doesn’t like bragging about donating money. While other celebrities make the front page with such news, this guy chose to remain silent about his good deeds. However, a few journalists were curious to see if he is really as nice as he appears to be. Turns out that Reeves is constantly donating for various causes.

I don’t like to attach my name to it, I just let the foundation do what it does.

He has willingly taken pay cuts to support other colleagues

When he got his role in The Devil’s Advocate, Keanu found out that Al Pacino won’t be able to join the team due to the film’s budget. So he agreed on a pay cut because he was eager to work with the legendary actor.

This was not the first time he showed his generosity. For the Matrix sequels, Keanu took a significant pay cut so the producers would invest more in costumes and special effects. And he didn’t stop there. As an extra “thank you,” he gifted stuntmen with motorcycles.

He’s always been respectful of women

In 2019, fans on Twitter noticed that Keanu is a true gentleman when he’s taking photos with other women, whether they’re celebrities or his fans. Instead of grabbing or hugging them, he usually hovers his hands above their lower back.

While others have stated that he’s just trying to avoid allegations regarding the #metoo movement, we believe that he’s simply well-mannered.

It’s not like the internet needed more reasons to love Keanu Reeves. Nonetheless, Winona Ryder has provided another one.

We’ve already mentioned that in 1992, the two worked together for Bram Stoker’s Dracula. In an interview with The Sunday Times, the actress recalled a shooting scene where she was supposed to cry and act in terror.

Since director Francis Ford Coppola wanted to get the best out of this scene, he appealed to some really controversial methods. In order to get Winona’s real tears, he began shouting insults like “You whore!”

As if this wasn’t already enough to make any woman feel bad and disrespected, Coppola asked other actors to join in. The director later admitted that he specifically asked Gary Oldman (who played Count Dracula) to say unscripted “horrific and evil” things to Winona. According to him, this is a common practice when it comes to improvisation.

However, Keanu Reeves refused the director’s instructions to verbally abuse his colleague. This obviously meant a lot for Winona who now says that she was lucky to have him around.

Francis was trying to get all of them to yell things that would make me cry, but Keanu wouldn’t, Anthony wouldn’t. … It just didn’t work.

Back in 2018, the Stranger Things star joked that she married Keanu in real life. Now, we’ve seen a lot of weddings in movies, but it appears that this one was “the real deal.”

We actually got married in Dracula, No, I swear to God, I think we’re married in real life.

During production of the movie Dracula, Coppola used a real Romanian priest. They filmed the wedding scene in an Orthodox Church and the priest performed a full authentic ceremony. So while the two haven’t officially signed anything, they’ve been married in the eyes of the church for almost 30 years.

Married or not, they’re still great together

Whether they’re on the movie set or hanging out in real life, Keanu and Winona really look like they’re having a great time. They always speak highly of each other and support each other’s work.

In regards to the incident with director Francis Coppola, Winona Ryder says that they’ve moved on and that they’re “good now”. Still, she is very grateful that she had someone stand up for her at the time.

It’s not a secret that the movie industry allows female actresses to be abused by their peers. Keanu Reeves took a stance by defending Winona and he proved (once again) his integrity, both as a man and an actor. We can only hope other actors will do the same when necessary.