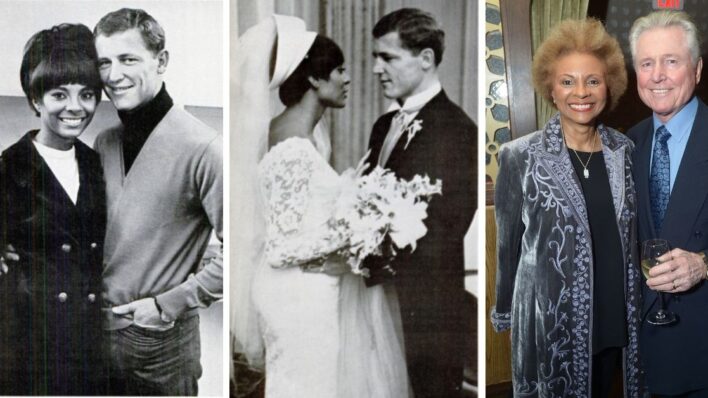 50 Years Ago, They Received Hate Letters For Their Love–Today, They’re Still Together

Aside from playing an iconic character in Deadpool, Leslie Uggams has lived a fascinating life. Her relationship with her husband Grahame Pratt defied all the odds of interracial love back in the 60s.
By Aly Walansky    September 14, 2020

Aside from playing an iconic character in Deadpool, Leslie Uggams has lived a fascinating life. Her relationship with her husband Grahame Pratt defied all the odds of interracial love back in the 60s.

Leslie Uggams is probably best known for her role in the Deadpool series, but her real life reads a bit like a movie as well!

At the heart of her life story is an incredible tale of love that has spanned over 5 decades, defying the odds of racism and prejudice.

Her family expected her to marry a black man

Born in 1943, Leslie’s talents as an actress got her into show business very early in life. At only 10-years old, she already made a record for MGM. This was only a precursor to an incredible television, screen and film career.

The time Leslie grew up in was a difficult one for anyone in an interracial relationship. In a 1967 interview with Ebony, Leslie recalls how she was expected to marry a black man.

When she dated a white boy in her teens, her aunt told her not to entertain the idea of a future with him. Leslie said:

“I remember the shock I got once when I was dating a white boy. He sent me a colour picture of himself. I showed it to my aunt. He was a good looking boy with beautiful hair. I thought he was gorgeous. But my aunt to one look and started in to lecture me. ‘Well he’s alright, I suppose,” she told me, “but only for dates, huh, honey? When you’re thinking of settling down for keeps you’ll make sure you marry a nice [Black] fella, won’t you?'”

Leslie never discriminated when she dated even she admits, “I had to be extra careful of the company I kept,” being a black woman in show business.

Then, she met Grahame

By the time Leslie met Grahame Pratt, she was already successful. Even though their first meeting in Sydney, Australia was not ideal, Leslie said she would never forget it.

“Then I came for my first appearance at Chequers night club and met Grahame.”

He was quite drunk and asked her to join him and his friends for another drink.

I don’t know why I ever agreed to join them for yet another drink but I did. I reckon I must have liked his style. I remember thinking he was English, not Australian.

After that, Leslie and her mother kept seeing more and more of Grahame. “I found myself really falling for him, which was quite a thing for me to realize as I was only 21.”

When she left Sydney, it would be 12 months until she would see him again.

She didn’t believe he could handle the relationship

The thing is, unlike Grahame, Leslie is American and she was way more aware of the public perception of interracial relationships in her home country than he was. So she had reasons to question the marriage and the strength of his love.

I believed he loved me and wanted to marry me, but at the same time I felt he might also have welcomed a way out of our love, if that were possible.

“I mean it is a tremendous responsibility to take on a mixed marriage like ours,” Leslie continued. She identified 3 problems they would have to contend with: the racial tensions in America, the fact that she was not going to quit her work in show business and the necessity for Grahame to move to the United States.

So Leslie decided they would try it out at first, to make sure their marriage could withstand it.

I felt that as I was the one who would be taking him away from the sort of life he had been used to it was up to me to make sure he really knew what it would be like.

They got engaged for 5 months, during which he came to New York to meet her family.

She was afraid they wouldn’t accept him

“Knowing my family’s ideas about mixed marriages I wanted to know, too, whether they would really accept Graham and not just tolerate him,” she said.

You can imagine how I felt, after they got to know one another, my father told me he couldn’t hope for a better son-in-law.

Leslie was pleasantly surprised at Grahame’s ease with her friends and family. It turns out that being Australian gave him a different perspective and approach to the new culture he had moved into.

“He had none of the self-consciousness about the situation that a white American often has. He fitted in easily with all my friends…just because he liked them. And they certainly liked him, both the men and the girls.”

Leslie and Grahame settled into married life quite well. They lived in New York where hardly anyone made nasty remarks. “It was not as hard as I expected it to be,” Leslie toldPEOPLE. “I think the reason is that Grahame was not an American white man. But of course we did get mail.”

“Sometimes when I go on tour through the States I get anonymous letters about being married to a white man,” Leslie revealed. “I remember I got one in Detroit of all places. It came to the club addressed to ‘The Little Negro Entertainer.’ They’re always addressed something like that and they’re not pleasant to read.”

Back in that 1967 Ebony interview, Leslie wished for one thing: “I just want my children to be happy as we both are…Then they’ll have everything that is worth living for.”

Well, 55 years later, Leslie and Grahame are still going strong. The couple went on to have two children: Danielle and Justice, 42, and are now grandparents of Cassidy, 7, an aspiring actress.

As for how they’ve made it work all these years, Leslie said “We laugh all the time — but it ain’t always roses. We have fun together.”

Don’t underestimate the power of love

Leslie and Grahame’s heartwarming story proves that love trancends everything from hostile environments and cultural differences. Both decided to give themselves a chance. Had they listened to their doubts, they would have missed out on their love. Instead, they tried to make it work, keeping an open mind. We can certainly all be inspired from this incredible couple.