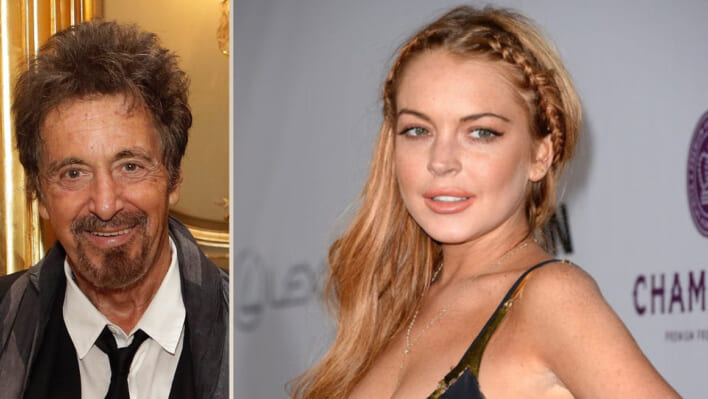 Lindsay Lohan is finally making her comeback. In an interview with Cosmo magazine, she opened up about her friendship with Al Pacino and the important advice he shared with her over the years.
By Rhea Kumar    November 10, 2022

Lindsay Lohan is finally making her comeback. In an interview with Cosmo magazine, she opened up about her friendship with Al Pacino and the important advice he shared with her over the years.

Unlikely Hollywood friendships never easy to come by, but when we do find out they exist, it’s often heartwarming. Al Pacino, 82 is a seasoned Hollywood great, and Lindsay Lohan, 36 is a 1990’s child star who had a tough time living under the spotlight. How did they cross paths, and what advice did Al Pacino give Lindsay that she remembers to this day?

RELATED: How Julia Roberts and George Clooney’s Lifelong Friendship Helped ‘Save’ One Another

Lohan talks about her struggles, her new husband, and picking up the phone for none other than Al Pacino.

Lindsay Lohan is a Hollywood darling who got her start in classics like 1998’s The Parent Trap, Freaky Friday and one of her best known roles as Cady Heron in Mean Girls.

Because Lindsay’s rise to fame was so meteoric, the young actress had a difficult time dealing with the constant paparazzi coverage of her life, and repeated invasions of privacy that came with her global status.

After a series of unsuccessful movies, troubles with addiction and other personal issues, Lohan stayed out of the spotlight and hasn’t starred in a major movie in over a decade. In that time, she’s spent her time flexing her entrepreneurial skills launching a beach club in Mykonos, Greece which even spawned a reality show. in 2014, she made her London West End debut in a play which received mixed reviews. She even tried to revive her music career.

Now, Lindsay is back and perhaps more determined than ever before to showcase her original talent and craft: acting. She has recently signed a three-film deal with Netflix, and she is set to star in an upcoming Christmas rom-com, Falling for Christmas.

Recently, Lohan sat down with Cosmopolitan Magazine to discuss her return to acting, and she revealed a very surprising friendship that she shares with actor Al Pacino.

“He always says, ‘Focus on your craft when it comes to your work.’ And I think that’s really important. Don’t let other outside things blur your vision,” Lohan shared.

Al Pacino is an Oscar-winning actor who has starred in some of the most successful films in Hollywood including the Godfather, The Scent of a Woman, and Scarface- so it’s no surprise he’s eager to share his lifetime of wisdom.

Lindsay Lohan met Al Pacino when they connected back in 2014. Lindsay acted in David Mamet’s West End production of Speed the Plow, and Mamet is good friends with Al Pacino. It was there that Pacino offered Lohan pre and post show rituals. They have connected ever since.

Lindsay revealed to Cosmo that she actually asks Al for a lot of advice on many matters besides work. “Just life-wise, because he’s a great person to talk to,” she shared.

RELATED: George Clooney Handed 14 Friends a Mystery Suitcase Each – What They Found Inside Shocked Them

She also shared that their relationship is often limited to phone calls, so one day, when the two crossed paths at a restaurant in San Francisco, she couldn’t help but get star-struck over the actor, and even asked to take a photo to capture the moment.

She said, “Recently, I was at a restaurant in San Francisco with my husband and his family, and all of a sudden, this waiter was bringing our food to a different table, or I thought he was.…I was like, “Oh no, he’s taking that to the other table,” and then I realized he was blocking a paparazzi flash. And so when he came by, I go, “Oh, thank you so much for doing that.” And he goes, “Oh. No, I wasn’t blocking it for you. Al Pacino’s here.”

The Importance of Loving What You Do

Al Pacino’s advice is a great life lesson for anyone, whether you’re an actor, painter, lawyer or teacher. Lohan’s interpretation of his advice is about as important as it gets. “Don’t let outside things blur your vision.”

When it comes to your work, make sure you focus on the craft, and don’t let anything else influence the way you see it. We live in an extremely busy world, where a lot of outside noise and the opinions of others are so easy to come by (thanks to social media). It often becomes hard to balance everything that you love.

In fact, the only way to truly enjoy doing what you love is to tune out the noise, and focus on what matters the most to you.