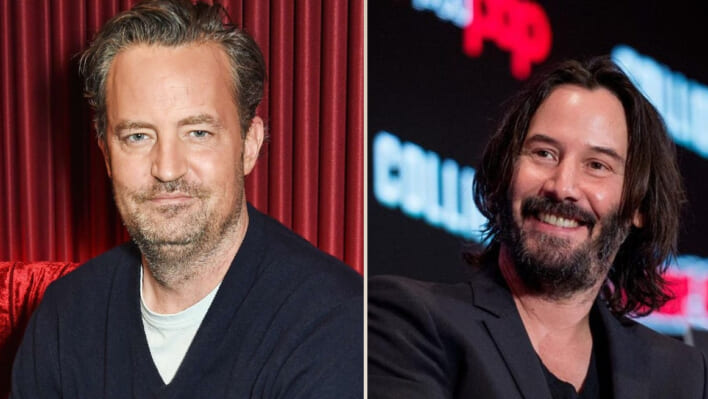 Matthew Perry might have retracted his comments about Keanu Reeves (somewhat), but why did they rub the Internet the wrong way? Let’s unpack Perry’s misconceptions and take a moment to look deeper into the world of beloved Keanu.
By Mikaela Lucido    November 2, 2022

Matthew Perry might have retracted his comments about Keanu Reeves (somewhat), but why did they rub the Internet the wrong way? Let’s unpack Perry’s misconceptions and take a moment to look deeper into the world of beloved Keanu.

In recent weeks, Matthew Perry’s memoir Friends, Lovers, and the Big Terrible Thing has been the talk of Twitter. From revealing how Jennifer Aniston saved his life to confessing how a medical scare forced him to reevaluate his career, Perry laid it all bare in his book.

RELATED: Scott Steindorff: Killing Myself with Drugs and Alcohol

But among his deeply honest musings on co-star crushes and his battle with alcohol and drugs, was a take nobody seemed to appreciate: Why was Keanu Reeves still alive?

While reflecting on the death of River Phoenix, who Perry acted alongside in A Night in the Life of Jimmy Reardon, the actor observed: “It always seems to be the really talented guys who go down. Why is it that the original thinkers like River Phoenix and Heath Ledger die, but Keanu Reeves still walks among us?”

Perry went on to reminisce on how he punched a hole through Jennifer Aniston’s dressing room wall upon finding out about Chris Farley’s death. “Keanu Reeves walks among us,” he reiterated.

In response to media backlash, Perry has since issued an official apology to People Magazine, saying he was “actually a big fan of Keanu.” According to the 17 Again actor, he chose Reeves’ name at random and admits he should have chosen his own instead.

Though maybe Perry missed the point.

It’s time to peel back the layers here. Sure, Perry’s comments underestimated a versatile Hollywood icon. They also weren’t as grounded as Perry might hope. (One glance at the Matrix star’s filmography gives you a glimpse of his multifaceted portfolio.)

For the public, what struck all the wrong chords was Perry’s insensitivity to the very real and deep friendship between Reeves and River Phoenix. Even in recent interviews, Reeves’ grief is palpable. In late 2021, he told Esquire how he hates “speaking about him in the past.” To Reeves, his best friend existing in past tense still feels foreign thirty years later.

RELATED: How Julia Roberts and George Clooney’s Lifelong Friendship Helped ‘Save’ One Another

It’s ironic and all too human. Wrapped up in his own despair, Perry didn’t take into account the loss of the very person he was criticizing. Intentional or not, his subtle digs didn’t just pit one actor against the other. They called one friend’s value into question while putting the other on a pedestal.

Perry’s grief and confusion are understandable. Losing anyone, much less someone gifted and kind is difficult to make sense of. Plus, it’s natural to compare yourself to idols — yes, even when you’re a celebrity yourself. But is it fair to diminish someone else’s worth entirely? Especially when that someone else is John Wick?

Keanu Reeves Is a Gem of the People

Google “Keanu Reeves kindness” and you will find a plethora of Keanu articles and think-pieces heralding the actor as the kindest and most down-to-earth man in Hollywood. Here’s Keanu gifting an entire movie crew, and Keanu organizing cars for plane passengers, or even Keanu accepting a stranger’s wedding invitation. Reeves has more than earned this glowing reputation.

Reeves is part of a tragically short list of famous men who mind their own business. He emulates the fierce protectiveness of his action roles and embodies the tenderness required for a romantic drama. (Yeah, we’re still crying about The Lake House.) He humbly contains multitudes. We’re extremely fortunate to have him walk among us.

It’s no surprise, then, how fans across the board became incensed by Perry’s evaluation of Reeves’ skill and general life. But Chandler Bing memes aside, there’s a lesson here.

Perry v. Reeves Shows We All Can Be More Compassionate

The age-old adage still rings true: “If you have nothing nice to say, say nothing at all.” It’s easy to point a finger to Matthew Perry. His memoir shows how the ways we measure success can narrow our perspective. It doesn’t help that his comments were inconsiderate and incorrect.

(Keanu Reeves’ cameo in Always Be My Maybe is poetic cinema, after all.)

Yet we can always go deeper. All of us could afford to offer more compassion to both the Keanu Reeves and Matthew Perrys in our lives. How many of us have made an unfair assessment of someone? How many of us throw away comments, tweets, and posts without a second thought on whether we’re tearing someone down?

On one hand, we’ve all been Matthew Perry, inadvertently causing harm with one phrase while trying to do good. On the other hand, we might feel like Keanu — underrated and misunderstood. The Perrys of our lives might not see our struggles even if they definitely exist.

Matthew Perry might never lay his eyes on this article (could that be any more depressing?). You did. So maybe we can rethink how we treat and speak of those who still walk among us.