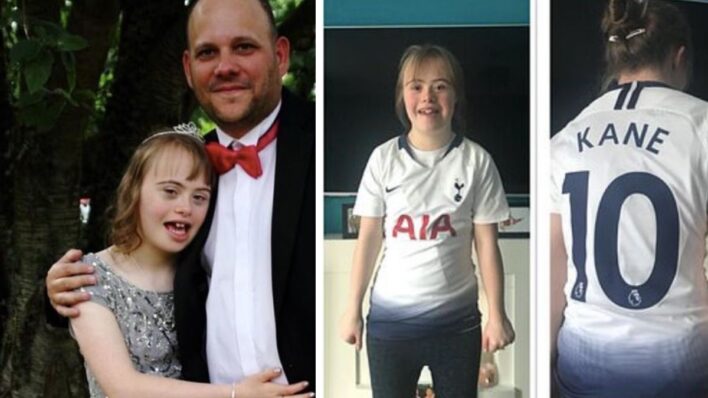 One father in England defended his daughter against online trolls and found some famous allies in the process. Video bombed
By Bryan Liquor    April 9, 2021

One father in England defended his daughter against online trolls and found some famous allies in the process.

Neil Markham of Banbury, Oxfordshire, took his 16-year-old daughter Ella, who has Down Syndrome, to watch a soccer match between Tottenham Spurs and West Ham United one weekend.

Markham tweeted highlights of their fun-filled outing to share with his family.

“My social media life is really about my kids, it’s not really about anything else. My brother lives away and it was a way of keeping him in the loop,” he told the Daily Mail.

The proud pop posted a video of Ella decked out in Spurs gear at the stadium doing what he tells the Mirror she loves most, dancing.

“She lives for music and dancing, whether it’s at home or in the house or a disco.”

“After the game, they had live music and I made sure we went there because she would love it — she was entertaining everybody around.”

To Markham’s shock and disgust, Twitter trolls emerged and posted abusive and derogatory terms aimed at his daughter.

Markham immediately called them out.

“This girl would wish you nothing but happiness. Why do you need to be like this? Contact me directly rather than hiding”

Markham’s post was retweeted over 1,600 times and quickly gained over 1.7 million views, with many posters coming to Ella’s defense and calling out her bullies.

“Your daughter is so beautiful! How anyone could ridicule her… let me at ’em!👊🏻 ,” tweeted someone.

“I support this beautiful girl, this HUMAN BEING, and her brave fabulous father…come and have a go if you think you’re hard enough and then crawl back into your dark and disgusting hole.”

“Ella you are incredible. Sending love and light to you and your family. love @patsykensit❤❤❤.”

Spurs favorite Micky Hazard had warm words for Ella, and harsh ones for her abusers.

“Hey Neil your daughter is a beautiful young lady and that is such a beautiful photo of you both. Sometimes people are cruel because they don’t see the beauty but the vast majority do.”

Hazard then invited Markham and Ella to an exclusive gala dinner with Spurs favorites, which they accepted.

After what he calls “the worst day of his life,” Markham told the Daily Mail that he has newfound confidence in human kindness.

“I was rock bottom on Saturday night and I feel so much better now and it can only be a positive thing.”

In the end, all Markham wants is something we all do.

“All I really want after tonight is to treat her as a normal person who would smile at you and doesn’t deserve to have fun poked at her.”

Finding positivity in your newsfeed or social media can often feel hopeless. There’s so much cruelty and conflict that it’s easy to lose hope — just ask Neil Markham.

However, he’ll also tell you that if you give people a chance, they’ll show you the kind of love and inclusivity that makes us all special, just like Ella.