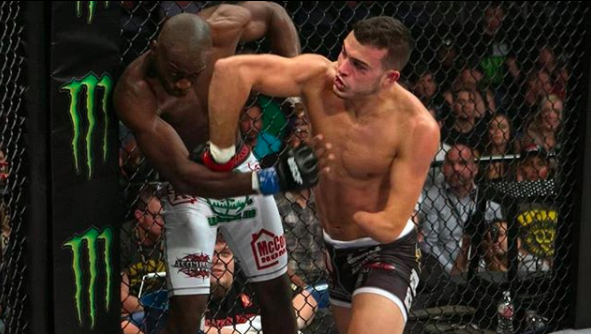 Born with a congenital amputation of his left arm, 32-year-old Nick Newell never let that stop him. The Springfield, Massachusetts
By Eliza Theiss    March 22, 2018

Born with a congenital amputation of his left arm, 32-year-old Nick Newell never let that stop him. The Springfield, Massachusetts

Born with a congenital amputation of his left arm, 32-year-old Nick Newell never let that stop him. The Springfield, Massachusetts native has been a professional MMA fighter for nine years now — and he is really good. Really good.

He is now campaigning for a shot at getting into the UFC, after being rejected back in 2012 by UFC President Dana White, who didn’t think a one-handed fighter was a fit opponent in the largest MMA organization in the world.

Newell doesn’t see things that way. He boasts 14 wins — two through KOs and nine via submission. And his latest victory proves just how talented he really is. Reentering the ring after a two-and-a-half-year career break brought on by injuries, the fighter came back swinging at the recent LFA 35 in Houston, defeating veteran Sonny Luque in the first round.

In a recent interview with TMZSports, Newell pointed out that the UFC dragged its feet in adding a women’s division as well, but eventually recognized the potential for it – both for showcasing great athletes and increasing profits.

He also scoffed at those worrying for his safety, clapping back with “I didn’t know so many people care about me so much.” Newell is used to fighting against the prejudices of others when it comes to his disability. Nowadays, he has very much moved past this.

With a truly fantastic comeback fight under his belt, buzz is building around Newell and his potential acceptance into the UFC. More and more MMA fans are discovering his talent, and mainstream media outlets have started paying attention to him.

In fact, with Floyd Mayweather’s potential switch to the world of MMA and the UFC, there are voices speaking out in favor of a match between the two. After all, plenty of fans would love to see a throwdown between a boxing giant turned rookie MMA fighter and the MMA fighter who doesn’t let his disability define him.