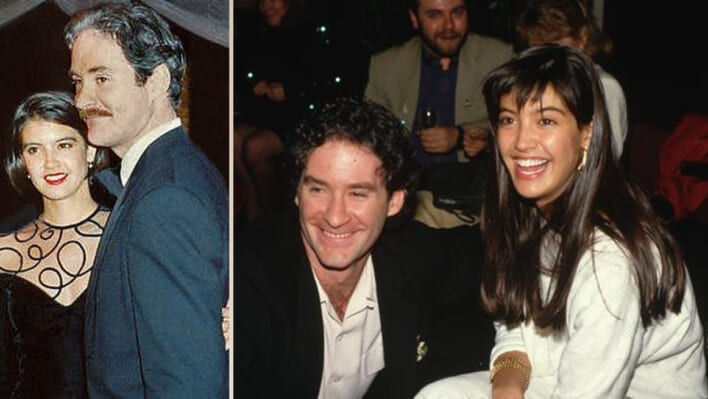 True love blossomed for the two actors who met at an audition and turned it into a loving marriage with two children and a pair of equally successful and satisfying careers.
By Laurence Lerman    January 1, 2023

True love blossomed for the two actors who met at an audition and turned it into a loving marriage with two children and a pair of equally successful and satisfying careers.

When they first met, Phoebe Cates was a 19-year-old model-actress best known for her legendary pool scene in the classic teen comedy Fast Times at Ridgemont High and Kevin Kline was a Tony Award-winning Juilliard graduate 16 years her senior who was making serious headway in Hollywood after conquering Broadway in such hits as the comedy Loose Ends and the Gilbert and Sullivan operetta The Pirates of Penzance.

Their initial encounter led to a romance, but as engaged and comfortable as they looked together, the odds were against the two of them succeed as a long-term couple. But odds are made to be defied and after a nearly 34-year marriage that has yielded two fine careers and a pair of grown children, it’s fair say that the team of Kline & Cates is a winning combination!

Phoebe and Kevin Met at an Audition for The Big Chill

Phoebe Cates and Kevin Kline met each other at an audition where both were vying for parts in filmmaker Lawrence Kasdan’s now-classic boomer comedy-drama The Big Chill. Kline ultimately actually snagged a featured role in the film, which also included William Hurt and Glenn Close in its ensemble, but Cates (also a Juilliard attendee) wasn’t hired for the part she auditioned for. But what she did walk away with was a lifelong partner in the form of fellow actor Kline, even if their relationship didn’t officially begin for some two years.

RELATED: Catherine Zeta-Jones’ Has It All – But After 22-Years of Marriage She’s in “Thankful Mode’ For One Simple Reason

Their paths crossed a second time a couple of years later at, appropriately enough, a theater: They ran into each other in 1984 at downtown New York City’s venerable Public Theater, where Phoebe was in rehearsals for the Russian drama The Nest of the Wood Grouse and Kline was on another floor working on Shakespeare’s Henry V.

While he was very much intrigued by the woman who would one day become his wife, Kline was unsure about moving forward during the early stages of their romance.

“When I first met Phoebe, I remember thinking, ‘She’s too happy to be with me. She’s too enthusiastic about life…. What’ll we talk about?,'” Kline recalled.

But their relationship grew over the years and the pair ultimately surprised those who doubted it would last when they tied the knot in a private wedding ceremony in New York in 1989.

Kevin First Thought “She’s Too Happy to Be with Me.”

Things moved quickly as Phoebe and Kevin welcomed their first child, son Owen Joseph, in 1991, and then their daughter, Greta Simone, in 1994. Having previously starred in Fast Times, Private School, Gremlins and its sequel, Shag and the popular TV miniseries Lace and Lace II, Phoebe took a step back from acting after the birth of her children to focus on raising them. Though she has occasionally appeared on TV and in films over the subsequent decades (remember the wacky dark fantasy Drop Dead Fred?), she never jumped back into the business full-time.

“I knew that acting wasn’t an option for me. I wasn’t driven to do it again,” Phoebe recalls of that time. “I knew I had a certain amount of hours in my day, which didn’t include going off on 15-hour shoot days.”

RELATED: Adam Sandler Insists “Nobody Wants to Hear About My Secret to Marriage,” But He Is Dead Wrong

“No one was supportive, especially my husband,” she jokingly added.

One notable exception Cates made was for her good friend and Fast Times co-star Jennifer Jason Leigh, who co-wrote and co-directed The Anniversary Party in 2001. The offbeat comedy featured Cates, as well as brief appearances by the rest of the Kline/Cates crew!

Kline continued to act in movies and theatrical production, winning Tony Awards for Best Actor for The Pirates of Penzance, as well as the musical On the Twentieth Century and Present Laughter. And the Academy Awards came knocking when he picked up the prize for Best Supporting Actor for his role in the wacky comedy A Fish Called Wanda.

After Raising the Kids, Phoebe Opened a Boutique

While Kline added to his acting resumé, Cates opened the women’s clothing and jewelry boutique Blue Tree on New York City’s Upper East Side in 2005. Re-inventing herself as a retailer and starting up Blue Tree was Cates’ passion project (she has described it as a “mom-and-pop store without the pop”), which she immersed herself in after raising her two children. The store was an instant smash and continues to be successful as it begins its 18th year of business, just as Cates and Kline’s marriage approaches the 34-year mark.

RELATED: Kristen Bell’s Secret to a Healthy Ten-Year Marriage Is One Simple Phrase – And It Is Eye-Opening

Though Kevin Kline and Phoebe Cates were both working actors when they met, romanced and married, Phoebe Cates took a different direction in her personal and professional life, dedicating herself to raising their children and then abandoning her previous career to embark on one as a merchant and businesswoman!

Cates and Kline are proud of their own personal successes as well as each other’s. Clearly, it all begins with support and respect for one another’s personal goals, just it is necessary for that support and respect to work with the pair in forging a successful marriage and family life.

Kevin Feels Their Age Gap Was a Key to the Marriage

When asked about the endurance of their relationship, Kline interestingly notes that the couple’s age gap was actually an advantage when it came to starting a family.

“I was 40-ish, when I finally stopped obsessing about acting and thought it would be nice to have a life and actually got married,” the award-winning actor told The Guardian.  “If I had married someone my own age, the possibility of progeny would have been very slim. I didn’t consciously say: ‘Hey, we could make babies; want to get married?’ It just happened that way.”

Well, it appears that true love and a respect for each other’s needs and professional wishes worked for Kevin Kline and Phoebe Cates, along with their two grown children, with whom they remain very close.

“We have dinner all together once a week at least,” Kline told Parade in a recent interview. “The kids haven’t banished us from their lives.”