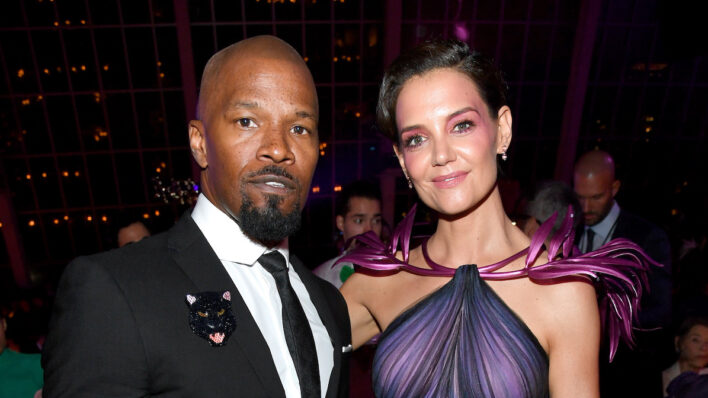 Jamie Foxx relationship with Katie Holmes came after her chaotic divorce with Tom Cruise. It turns out that Jamie’s approach to dating was just what she needed, even if the two did not last. This is what Jamie Foxx can teach us about romance.
By Maya Khamala    August 14, 2020

Jamie Foxx relationship with Katie Holmes came after her chaotic divorce with Tom Cruise. It turns out that Jamie’s approach to dating was just what she needed, even if the two did not last. This is what Jamie Foxx can teach us about romance.

Jamie Foxx is one of those preeminent stars whose fame crept up slowly, eventually managing to blow people away. It started in the 1990s when he worked as an actor and comedian capable of mimicking almost anyone, and was also a regular on the comedy-sketch show In Living Color.

Around the same time, he also starred in his own self-titled critically acclaimed sitcom. But it wasn’t until the mid 2000s that he became more widely known. Most people now know Jamie for his head-turning performance in Any Given Sunday (1999), Collateral (2004)—for which he became the first African American to be nominated for two Academy Awards in the same year— and Tarantino’s Django Unchained (2012), which brought him more widespread attention than ever before.

The fascinating irony of Foxx’s gradual and glorious rise to fame is that he has made every effort possible to keep his romantic life unknown, something not many celebrities today can count among their, well, claims to fame.

While Jamie’s daughters (Annalise, 11, and Corrine, 26) both have relationships with their mothers, the women’s identities were a real mystery to everybody else for a very long time. While these days there is very minimal information about Jamie’s two ex-girlfriends turned baby mommas floating around online, its occurrence is recent and not at all revealing.

His eldest daughter’s mother Connie Kline is a US Air Force veteran turned tax advisor with as much of a penchant for privacy as Jamie. “There’s a reason I haven’t spoken for 22 years. I like my privacy,” she said in January. The mother of his second child, Kristin Grannis, may have met Jamie while she was working in PR. Determined reporters have managed to ascertain that she remains friends with him to this day.

As though to outline his love philosophy more concretely (or at least give us fans a bit more to ponder), Jamie Foxx once told Oprah Winfrey:

I can be in a monogamous relationship, but my motto is, whoever you date, don’t let people know.

Similarly, earlier this year he told ET, “I like to stay quiet with anyone that I’m dating, that I’m really, really dating. I feel like this: if there’s somebody that you’re dating, the worst thing you could do is let [the cameras] touch it.”

And finally, as though to reinforce it all, in an interview with Hot 97 he confessed to keeping everything significant to him away from the spotlight, saying, “if it’s really real, you don’t need to promote it.” ‘Nuff said and well said by a star who knows how to grow fame where it actually counts.

While Foxx has certainly been secretive about all his relationships, perhaps the most high profile of these was his relationship with Katie Holmes. To be fair, it’s a lot harder to keep a relationship a secret when both parties are giant stars.

Nonetheless, he made every effort, because they both wanted total privacy, even if their reasons were different.

Katie’s divorce from Tom Cruise was not an easy affair. The romance itself had unravelled in front of the public’s eyes–who can forget the famous Oprah video, where Tom Cruise gushed about Katie by jumping on the couch–and its aftermath, the dissolution, was also the object of intense media scrutiny.

It’s now common knowledge that the pair connected in the wake of her divorce from Tom Cruise, who remarkably got her to sign a divorce agreement stipulating that she was not to date anyone else publicly for 5 years.

This might explain why she kept her relationship with Jamie on the DL for so long. But she might also have been motivated by her desire for something different, after the Tom Cruise saga. In fact, a 19-year-old Katie Holmes once told Rolling Stone her type was a more reserved man.

I don’t know, it’s my thing. Someone who’s intelligent but not showy. Especially in this business. You get around so many people who always need to be on, and it’s nauseating. It’s like, ‘Would you just be normal?’

Jaime was definitelWhatever the real reasons were, one might say they were perfectly matched–and the whole thing was a respite from the whirlwind of her romance with Cruise.

Jamie and Katie first made waves when they hit the dance floor together at the Apollo in New York in 2013, just over a year after she had split up from Tom. It was a rare and isolated appearance on their part, and afterwards Jaime wholeheartedly denied they were an item.

Although it’s not entirely clear when the two transitioned from friendship territory into the love realm, one thing’s for sure: Jaime respected Holmes’ wish for privacy 100%. Although the couple recently ended their six-year romance not long after having made their relationship a bit more public, an underlying respect for space and privacy will always underpin their connection.

Watch this Goalcast video on how Katie Holmes moved past her tumultuous marriage with Tom Cruise:

When Olivia Munn dropped by E!’s Busy Tonight back in 2018, the actress shared the sage dating advice that Jamie once gave her. Friends since 2010, Olivia has called Jaime a “big brother.”

She recounted how she once dated an actor (who has remained unnamed), and although they hadn’t defined their relationship, she was invested. One night when she and her man attended a party, she found herself feeling incredibly depressed about the fact that he was on the other side of the room flirting with different women.

This advice is especially poignant, given Katie Holmes’ history–her romance with Tom Cruise took her away from acting for quite a while.

Turns out that was exactly what Olivia needed to hear at the time. “Every now and then, [his message] would pop into my head—and, of course, it kind of veered off sometimes—but I’ll think about that sometimes, and it brings me back to center,” she said.

Learn from the past

Bottom line: Jamie Foxx likes to keep his public and private lives separated to whatever extent possible—especially when it comes to matters of the heart—and I can’t say I blame him.

Furthermore, given what we do know about his past romances, he seems to choose women who are well-matched in that they too have very good reasons for preferring privacy over high-profile hijinks. I say he deserves mad respect for being truthful, upfront and respectful, even if we don’t all get to revel in the details.

Jamie Foxx fans be forewarned: your discreet yet shining star has a new Netflix movie, Project Power, coming out this Friday, August 14th!