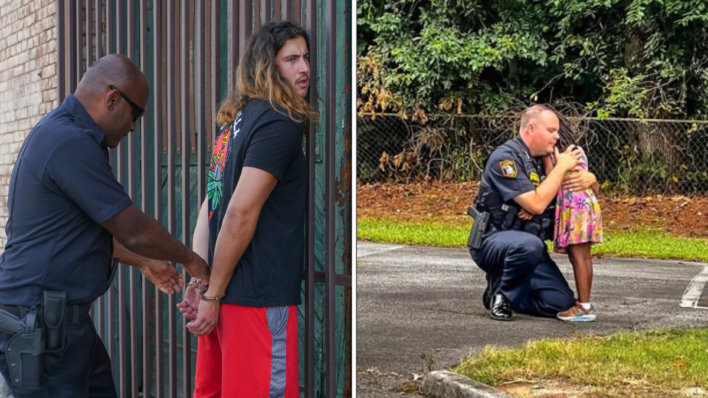 A photo of Interim Chief Snively and a little girl is warming people’s hearts.
By Amber Dowling    October 19, 2022

A photo of Interim Chief Snively and a little girl is warming people’s hearts.

They say children are resilient, but that doesn’t mean they aren’t affected by the world around them. Especially if they witness a scary situation that they may be too young to fully understand. That’s when a word of comfort or an adult taking the time to speak with them can make a big difference. And it’s probably why this story has captured so many hearts.

Why One Police Officer Was Forced to Arrest a Driver

Over the summer, police in Atlanta were forced to arrest a driver after he was pulled over. According to one person on the scene, it could have been a simple stop-and-go. But the man reportedly wanted to fight, so police took him for a ride instead.

As police spoke to the man’s girlfriend, who was in the car with him when he was pulled over, Morrow Police Department Interim Chief David Snively noticed the woman had a little girl who was crying in the backseat. He began comforting her, and the witness above snapped a photo.

RELATED: Police Officer Pulls Struggling Father Over – Has The Best Response When He Hears His Touching Story

“I want to PRAISE Morrow’s Chief for taking a few minutes and consoling the little girl,” Sam Juarez wrote. “Sometimes, we don’t think of what these officers go through on a daily basis. A lot of them are fathers themselves.”

The post picked up traction and the Morrow Police Department also shared it.

“He knelt and comforted her, answering her questions and explaining what was happening — all without knowing this photo was being taken,” the department wrote. “Interactions like this happen every day, at every level of our department, and we’re proud that a community member thought to take this picture and share it with us!”

How a Police Officer Reacted to a Crying Little Girl

Many people responded to the post, although some were skeptical that it was staged. Eventually, Snively decided to craft his own post on LinkedIn that gave more details and highlighted his side of the story.

“Today was a hard day, but late this afternoon, I was right where I needed to be,” he wrote. “This little girl walked confidently up to me during a traffic stop, fighting back tears as she asked me if her mom’s boyfriend (who was being arrested) would ever come home. It ripped my heart out,” he continued.

“I promised her that he was safe and that he would be home soon. She nodded, then wrapped her little arms around me, laid her head on my shoulder, and sobbed. I was both saddened by the moment and encouraged that she felt safe with me; it was a terrible, beautiful moment.”

Snively also revealed he had no idea the picture was taken until someone sent it to him hours later.

“There are many things in my life beyond my understanding, plenty of failures and disappointments. But one thing has been always clear to me: I know my purpose on this earth,” continued. “Today, God put me in a place to use it, and I am certain that sweet little girl did more for me than I could have done for her.”

How a Police Officer Proved the Importance of Compassion

There are many conversations about how police could and should be doing better. There are no easy solutions, and it’s a complicated subject, but that’s why stories like these are essential.

Many officers do the job with love in their hearts and have families they go home to at night. No one wants to see a child upset, and the fact that this officer took time to console her went above his job description.

Beyond that, this story just reminds us that children are always watching. It can be hard to control our tempers or deal with rejection, loss, and pain in a composed way. But little ones are forming their behaviors based on how we act, so whenever possible, it’s a good idea to try and model cool, calm, and collected behaviors in our lives.

This little girl had a traumatic day too, but hopefully, she’ll remember the kind officer who took the time to talk her through it and treat her like a person. This story — like many others — could have had a different ending.