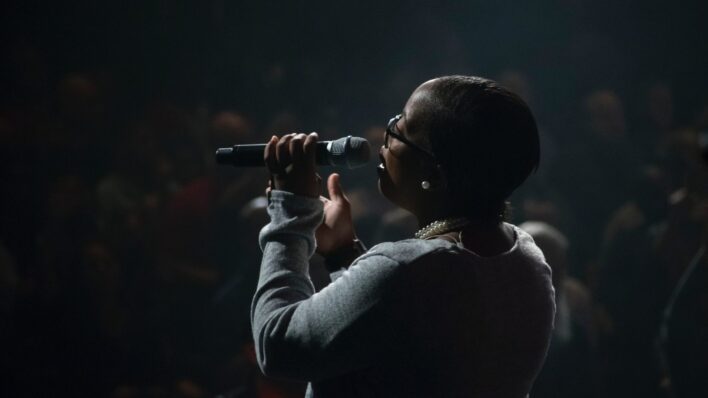 Whether speaking at a conference or to a small group, the ability to convey your ideas and inspire others in
By Matt Valentine    February 13, 2018

Whether speaking at a conference or to a small group, the ability to convey your ideas and inspire others in a group setting has great power.

Some of us are born with the ability to do this naturally. And that’s great.

But the rest of us…not so much. For that, you need to work on refining your ability to communicate effectively, both in organizing the speech matter itself and the way you deliver it.

There’s a lot you can do to improve your public speaking skills, but a few things stand out more than others.

These tips are based around improving how you collect yourself before your speech and how that affects your delivery, as well as your ability to project your message during your speech itself.

1. Use an outline (ditch the speech)

Politicians have speech writers. You don’t need one (unless you’re a politician!).

Why? Because you, depending on what you do, probably don’t have to tiptoe around what you’re talking about. Politics are a whole different beast.

Also, unlike many politicians (sorry, guys), if you’re giving a speech about something, you damn well better know the material like the back of your hand. Otherwise, why are you speaking (unless it’s practice)?

That’s where this strategy comes in. I used it extensively when I had a weekly podcast and it helped make a huge difference in the ease and quality of my speaking.

Here’s the idea: Instead of memorizing a collection of words, with the inevitable stress that arises when you slip-up on a single syllable, just make an outline. You’ll typically be able to take brief notes with you, so simply make an outline of the important topics and sub-topics you want to cover and do this during your speech:

The flow and feeling of giving a speech in this way is entirely different than when you’re reading from a written speech. When you do this — assuming you know your stuff — you’re able to flow more freely and organically in the way you speak, making it easier to tap into emotions and appear more believable and confident.

It makes a huge difference.

Okay, this one all depends on the setting. However, in most cases, a speech is far more powerful when given without visual aids like powerpoint.

This is because visual aids become a sort of crutch, where you begin to depend on them as opposed to your own ability to communicate a message clearly. And that’s exactly why this point helps improve your public speaking skills. The less you depend on outside gimmicks, the better of a communicator and speaker you become.

As Steve Jobs once put it, “people who know what they’re talking about don’t need PowerPoint.”

Also, the real power of a speech is your ability to convey emotion. Sure, some topics allow for some pretty striking visual aids, and that’s where this can really be a positive, but most topics aren’t in that category and end up just distracting.

3. Fixate on points within the crowd and use your peripheral vision This is a simple tip that has helped me quite a bit.

Looking into other people’s eyes during a speech is really uncomfortable and it can throw you off when someone has a less than pleasant expression (let’s face it, in a group of people you’re going to see all kinds of facial expressions).

So, what do you do? Two things:

This not only helps avoid the uncomfortable feeling of catching eyes with someone, it makes it appear that you’re engaging with the crowd while simultaneously being able to stay focused more on delivering your speech. It’s a simple tip that can make a big difference.

No matter where or how you’ll be speaking, the ability to communicate in a group setting is a powerful skill that can and will serve you for your entire life. Use these quick tips to take your public speaking to a new level and continue to improve with practice.