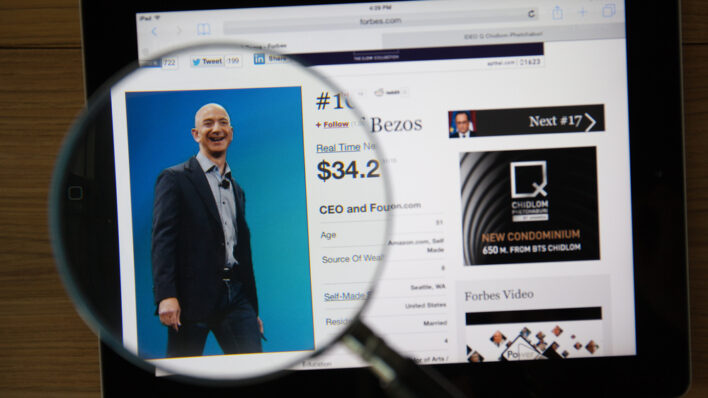 Resourcefulness: The Most Valued Quality of the World’s #1 Richest Person (and How to Develop It)

It’s hard to go a day without hearing or seeing something Amazon related. What started as a small online bookstore
By Matt Valentine    December 19, 2017

It’s hard to go a day without hearing or seeing something Amazon related.

What started as a small online bookstore has exploded to become the quintessential online “everything” retailer in little more than a decades time. And, with its success, Amazon founder Jeff Bezos has become a magnet for attention from entrepreneurs, investors, and the average person alike.

In a recent interview at L.A. Summit 2017, Bezos spoke with his brother Mark (a TED speaker himself) about the importance of resourcefulness and the example their grandfather set for them growing up.

Surprisingly, it wasn’t his Ivy League education that he attributes to his success (because he is a Princeton alum) – it’s his ability to be self-reliant (i.e. resourcefulness). Life’s too short to hang out with people who aren’t resourceful.

Resourcefulness is an incredibly important quality that’s only just now getting attention. But what exactly is resourcefulness? And why is it so important?

In their talk, the Bezos brothers looked back on the lessons they learned from their grandpa and about his incredible self-reliance:

“He was incredibly self-reliant…. As a kid I got to see him solve his own problems.”

He goes on to say that:

“We learned a lot of things from watching him because he would take on major projects that he didn’t really know how to do and then figure out how to do them.”

According to both brothers, their ‘Pop’ as they called him did everything from craft his own suture needles to fix a tractor without having any prior experience and he even built his own house from a kit.

Bezos explains that resourcefulness is critical for anyone pursuing a big dream because it’s inevitable that we’ll run into problems. And when this happens, we have to figure out how to get ourselves out and move forward:

“As a lot of entrepreneurs know, the whole point of moving things forward is you run into problems, you run into failures, things don’t work. You have to back up and try again. Each one of those times you have a setback and you back up and try again, you’re using resourcefulness, you’re using self-reliance. You’re trying to invent your way out of a box.”

So, the billion-dollar question is: how do we develop resourcefulness, or self-reliance, within ourselves? There a lot of ways, but these are some of the best I’ve found:

To flex your problem-solving abilities, you can do one of several things. First, jumping at the chance to fix something or take on a new project that is outside your realm of knowledge are great ways to develop more resourcefulness. The idea is you want to put yourself in a position that you’re less (or not at all) familiar with so that you’ll have to work your way out of the problem.

Another option is to play puzzle games and other similar things. This helps flex the same areas of the brain you use when having to be resourceful, developing and refining them for when you’ll really need them. If we go further down and distill resourcefulness and problem-solving down to their essence, the primary ability we arrive at is creativity. The more creative you are (or the more tapped into your creativity you are, depending on how you like to look at it), the more likely you are to be able to figure out a solving to said problem.

The great part is, developing or opening up your creativity is easy. First, find an activity that allows you to express yourself creatively and really get your brain working, even if it’s just a hobby you do every once in a while in the morning. Better yet, if you do something creative professionally.

Resourcefulness has been hailed by some of the most successful people in the world as an optimal quality for success in any endeavor. No matter what you do, take the time to develop more resourcefulness to increase your chances of success and to help make you more self-reliant.