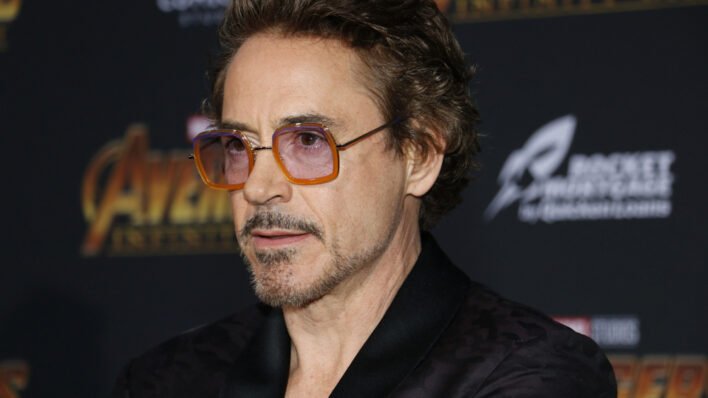 Robert Downey Jr. Bares His Heart in Emotional Speech, Opens Up About Dark Past and Delivers Powerful Message of Hope

19 movies into the Marvel Cinematic Universe (MCU), the premiere of Avengers: Infinity War’s was bound to be epic. Bur for
By Eliza Theiss    April 27, 2018

19 movies into the Marvel Cinematic Universe (MCU), the premiere of Avengers: Infinity War’s was bound to be epic.

Bur for some, the stories told by the Avengers have a deeper, more personal side — especially for Robert Downey Jr. himself, who plays Iron Man in the series. The actor gave a moving speech on the inspiring power of superhero movies, touching on his personal struggles and lessons learned in the process.

The present is this moment of glory for all of us. And the future…? That is always uncertain. But looking at these friends behind me, it seems like things might brighten up after all.

Stepping up to the mic, Downey didn’t waste time before diving into his own decades-long struggle with substance abuse and out-of-control behavior, according to Entertainment Weekly.

Contrasting that dark period with the present and surrounded by his cast mates, Downey Jr. shared his hopeful outlook on the future. And it’s a future that started out when he got a second chance at an acting career by starring in the original Iron Man movie in 2008.

If you play a superhero in one of these movies, and it works, you become a big star! And it… is… meaningless. Unless you use that to achieve something higher. You have to take direction from peers, and your family, and occasionally even an actual director.

The actor took special effort to emphasize the unity and support among the MCU cast members. “None of us are in competition with each other. We are all competing for each other,” he told the hooked audience.

Referring to her as “the very first First Lady of Marvel”, Downey Jr. gave a shout-out to longtime Iron Man co-star Gwyneth Paltrow. He also made a point of talking about the growing female representation in the Marvel Universe, both in front of and behind the camera, emphasizing the need for greater equality and visibility for women in the industry.

This is the MCU, right in front of you. It’s all about fighting for equality. The whole idea is to make space for others to succeed, and exceed our expectations.

And he had more to add on the topics of equality and representation, praising the immense success of Black Panther. To date, the superhero movie has surpassed $1.3 billion in world-wide ticket sales, not to mention all the stellar reviews and critical acclaim surrounding it.

“[The  movies] are inviting us to surrender and love and be of service,” Downey Jr. said of the power of Marvel’s superhero movies.“They are metaphors for how our world should be – or could be one day, if we fight for it.”

After all, the world could do with a couple more superheroes right now – and every one of us has the potential to become one.