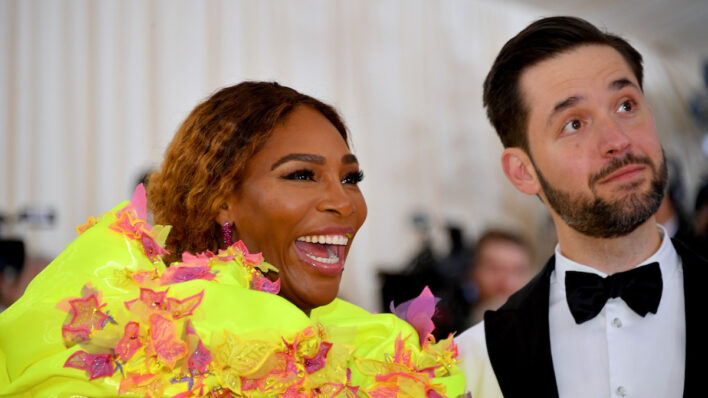 I’ve always seen Serena Williams as an inimitable, dominating force in the world of tennis. After all, she’s won 23 major singles titles—more than any man or woman in the Open Era of the sport–four Olympic gold medals, and the Women’s Tennis Association ranked her world No. 1 in singles eight times.

It’s no wonder that love and romance haven’t always come easy to her. In case you’ve never noticed, those among us with the brightest lights tend to wane in our power when paired off.

Which is all the more reason to have a look at how she came to meet her husband, internet entrepreneur and Reddit co-founder Alexis Ohanian. My theory: when you find someone who also shines a light, they’re more apt to love and respect yours.

As anyone who pays attention knows, Serena Williams has faced consistent (and deeply problematic) body shaming throughout the years from those who feel her muscles and her power make her look masculine.

She’s addressed these upsetting comments many a time, ultimately choosing to stay empowered and ignore the haters, but not without difficulty. “It was hard for me,” she said to Harper’s Bazaar.

People would say I was born a guy, all because of my arms, or because I’m strong. I was different to Venus [her sister]: She was thin and tall and beautiful, and I am strong and muscular—and beautiful, but, you know, it was just totally different.

This is the sad truth in the way the world currently views women who deviate from the norm either in looks or in personality traits. Strong may be sexy, but if a woman gets too strong (or shines too bright), her femininity is in question.

Serena’s strength is both physical but also an integral part of her personality, which has made her a source of inspiration to many. And no, it does not make her any less of a woman.

Another reason to listen to Oprah

There was a time when Williams believed she would never have both a successful career and a relationship. Before she met Ohanian, Williams is known to have dated Common, Drake, Grigor Dimitrov, and Brett Ratner among others, which she told Allure were “mostly great relationships.”

Yet—apparently not the relationship, am I right?

It’s a good thing she found a wise, fairy godmother figure in Oprah. The latter gave her a valuable piece of relationship advice.

Oprah said, ‘Never let anyone dim your light. That really stuck with me. It always was something that I could see in some relationships—my light would be dimmer.

Serena is indeed one of those people whose light shines very bright–even Beyonce cast her for the video of her famous song, “Sorry,” which is coincidentally about being unapologetic about leaving an undeserving partner.

“Now I feel like I can shine really bright and still do everything that I want to do,” Serena said. This is the kind of relationship everyone should strive for.

Serena and Alexis first met in 2015 at the Rome Cavalieri hotel where they were both staying. Alexis was hung over and sat down at a table next to Williams and her friends, oblivious to the fact that this annoyed her.

After trying and failing to provoke him into sitting elsewhere, Serena told her future husband, “We just don’t want you sitting there. We’re going to use that table.”

Yet somehow, in the course of the conversation that followed, Alexis was invited to sit with them. It was only then that he realized who Williams was. The rest, as they say, is history.

They got engaged in 2016, and welcomed their baby girl Alexis Olympia Ohanian Jr. in 2017. Fun fact: Williams, whose incredible list of accomplishments obviously precedes her, often says that her greatest achievement of all is being a mom. The couple got married later in 2017, and these days, Williams says she feels supported—both on and off the court.

The couple’s beautiful daughter, Olympia, reportedly has her mother’s arms, something Williams is happy about. “I knew I was having a girl, because when I was playing tennis in the [2017 Australia Open], I didn’t have one day of morning sickness, no symptoms. Australia is really hot, some days can be over 40 degrees [Celsius], which is insane, but she never complained. I said to Alexis, ‘This is a girl. Only a woman can be this strong.”

They both break boundaries together

Alexis, the one man who has been confident enough not to dim our protagonist’s brilliant light, began campaigning for paternity leave after Williams was bedridden due to birth complications.

He had to seriously step up and take care of his new family for several months. “To get to gender equality,” he says, “It’s essential that men take as much parental leave as women.” Fittingly, Alexis, like his wife Serena, continues to make his mark by flouting traditional standards whenever the occasion calls for it.

Look for someone who doesn’t dim your light

“Alexis doesn’t dim my light,” Williams says. “He doesn’t try to dim my light. He puts me in the light, even if I don’t want to be. He pushes me to further points I never thought about.”

The moral of the story: take Oprah’s advice. To be fair, it’s probably advice that’s you must already know intuitively. Judge a partner based on how they make you feel. Look for people who don’t dim your light, or who even bolster and strengthen you more. These are the relationships that will ultimately help you to grow and thrive as an ever-evolving human being.