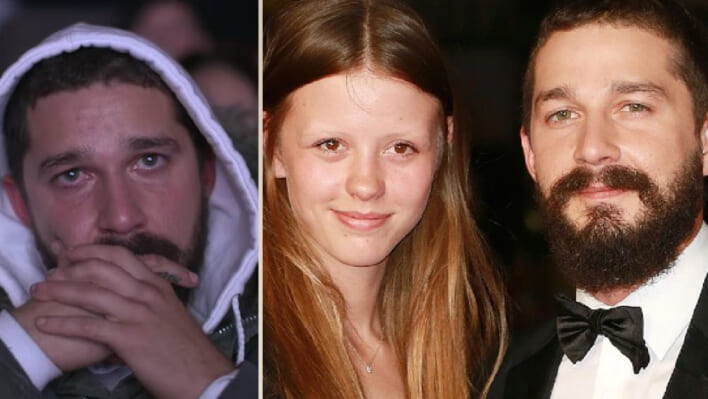 After a career full of regretful actions, Shia LaBeouf opens up about how Mia Goth helped him find his path towards becoming a better person.
By Andrew Silva    December 28, 2022

After a career full of regretful actions, Shia LaBeouf opens up about how Mia Goth helped him find his path towards becoming a better person.

Controversial actor Shia LaBeouf says his wife Mia Goth was the only “one person” who cared about him when his life was crashing down.

We often see celebrities who begin their careers as children ending up in some pretty rough places later on in life. The Child Actor Curse is usually due to the pressures of Hollywood, easy access to substances, or parental misguidance. Unfortunately for Shia LaBeouf, he struggled with all three… but he’s done making excuses.

LaBeouf established himself as a talented actor, starring alongside the likes of Brad Pitt, Michael Douglas, Tom Hardy, and more. However, his career slowly declined after some serious controversies, allegations, and many regretful actions came to light in recent years.

Back in 2018, Grammy-nominated artist FKA Twigs (real name Tahlia Barnett) met LaBeouf on the set of his film “Honey Boy.” When LaBeouf broke up with his now-wife Mia Goth, he began a long term relationship with Twigs that she went on to describe as “relentless abuse.” Her accusations led to a lawsuit siting sexual battery, violent behaviour, and emotional manipulation.

FKA Twigs Has Sued LaBeouf for Sexual Battery; The Trial is Set For April 2023

At first, LaBeouf denied the allegations. However, in a conversation with fellow actor Jon Bernthal on the “Real Ones” podcast, he opened up about his mistakes.

“I f—ed up bad… hurt a lot of people, and I’m fully aware of that. And I’m going to owe for the rest of my life.” He went on to say that “ I was a pleasure-seeking, selfish, self-centered, dishonest, inconsiderate, fearful human being.”

He sunk to the lowest point in his life, and got honest about contemplating suicide. Now, he’s on a spiritual journey to be the best man he can be, and Mia Goth is the reason for his life-changing turnaround.

Goth (“Pearl”, “X”) has been in an on-and-off relationship with LaBeouf since they first met on the set of their film Nymphomaniac in 2012. The two costars live-streamed their Las Vegas wedding in 2016, and their marriage shortly ended after Goth filed for divorce in 2018. Although the proceedings of the divorce remained private, the two have recently put aside their differences for good (LaBeouf refers to Goth as his “wife” throughout the interview).

During his time in rehab, LaBeouf reflects on the fact that Goth was the only person in his life to visit him. “She was present for me at a time when I didn’t deserve to have nobody in my life, especially her.” Since then, LaBeouf and Goth have fully embraced their love together, and earlier this year they welcomed their baby daughter Isabel to the world.

For years LaBeouf battled multiple addictions and struggled with his identity in Hollywood, leading to a destructive road causing pain to himself and everybody around him. Finally, the heavy allegations towards him were the public wake-up call he needed to truly understand the gravity of his actions.

RELATED: How to Talk to Your Kids About Mental Health

He also believes his daughter is a major reason he’s beginning to take accountability, saying that “knowing that your daughter is one day gonna search your name in a search engine and see that you are a deplorable, disgusting piece of s—t… that s—t hits.”

We Don’t Have To Be Our Past

The truth is, our mistakes and actions don’t make us who we are – no matter how regretful they may be. Instead, it is the lessons we learn and decisions that we make in the future that define who we are. Remember that we all need a support system, even if it’s only one person by our side.

For now, LaBeouf is honest and genuine about his goal of reconciliation. If he continues down the road he’s currently on, he’ll prove to us all that everyone deserves a second, third, or even fourth chance. All of us.

This article discusses topics of domestic violence, depression, and suicide. If you or someone you know is a victim of domestic abuse, or has thoughts of self-harm; please consider reaching out to the following organizations, or consulting the following resources:

Dial 998 for the Suicide & Crisis Lifeline