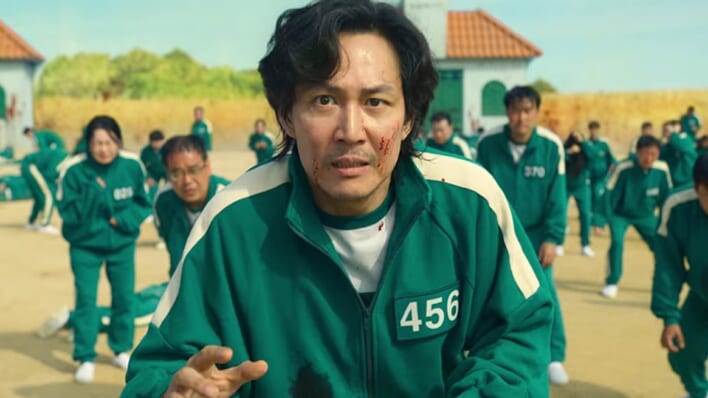 The Squid Game star received the award for Outstanding Lead Actor in a Drama Series, but many people may not know of the hardships Lee Jung-jae endured in order to be where he is today.
By Bina Lee Deir    September 15, 2022

The Squid Game star received the award for Outstanding Lead Actor in a Drama Series, but many people may not know of the hardships Lee Jung-jae endured in order to be where he is today.

Lee Jung-jae won the best actor award at the recent Emmys (the first Asian actor to do so) for his role in the hit Netflix series Squid Game. And while he is gaining a ton of international fame as a result, people may not know of the difficulties he had to overcome in order to become the successful actor and artist he is today.

Squid Game, which was directed by Hong Dong-hyuk, became a massive worldwide success and despite the director’s reluctance in wanting to produce a sequel, he eventually agreed with the support of a healthy contract with Netflix. Lee Jung-jae is also confirmed to star in the sequel.

Lee was already famous in South Korea. His breakthrough role was in a 1995 K-drama titled Sandglass. In the series, he played a tough and stoic bodyguard who falls head over heels in love with the woman he is hired to protect. He quickly reached heartthrob status and his career in acting took off.

It wasn’t until 20 years into his thriving career that he revealed a very personal part of his life in an interview. He talked about hardships that his family went through when he was younger and also talked about, for the first and last time, his autistic family member whom he cared for throughout most of his childhood, especially when his parents weren’t around.

Lee’s journey to international stardom is a story that many do not know about, but is important to share. The struggles and obstacles he had to overcome in order to achieve his dreams is one that many will find solace in and inspiration from.

To the world, Lee Jung-jae will likely forever be known as Player 456 in the horror survival series Squid Game. But way before this, Lee reached stardom for his role as Baek Jae-hee in one of the most-watched K-dramas of all time, Sandglass. The swoon worthy bodyguard who longs for Yoon Hye-rin, the girl he is hired to protect, was a romantic tale that many fell in love with.

It was even revealed that girl group BLACKPINK’s Jennie Kim was named after Lee’s character in the series. His character name Jae-hee sounded similar to Jennie, making it an easy name choice for her mother who was a huge fan. This was a true testament to how monumental his influence was in the industry as well as how many people adored him at this time!

Sandglass wasn’t the last of his successful projects. He also starred in The Housemaid, New World, Assassination, Deliver Us from Evil, Along With the Gods, and Hunt – all of which were huge box office hits domestically in South Korea. His most recent movie, the action-packed espionage flick Hunt, which is also his directorial debut, is currently gaining critical praise and is being screened at Toronto International Film Festival 2022.

Lee was riding a high wave of success and stardom for many years, but it took a full 20 years into his career for him to reveal a very private and shocking secret that many fans were completely unaware of.

In 2013, Lee Jung-jae revealed in a very heartfelt interview on the Korean talk-show Healing Camp, that he has an older brother who is autistic. The interviewer asked him why no one knew if he had any siblings. After a long pause, he replied, “I have an older brother.” In the interview he is visibly torn about revealing a very personal side of his life, he continues with, “I don’t think my parents will like me saying this.”

In the revealing interview, Lee elaborates more on the difficulties of living with his brother, but pinned them more as not living as comfortably as others. He would often have to chase after his brother to eat meals because he wouldn’t eat at the table. There were also a lot of instances where his brother would wander off and Lee would spend hours looking for him. He had learned from a young age that this was his family and that although they are not like other families, it is his own.

RELATED: Bullies Always Excluded Student With Autism – He Hits Back With the Best Response

In a separate interview, Lee disclosed that his parents have gone through a lot, especially financially. Their finances were further strained as a result of trying to find extra care for his brother. His parents had to work several jobs in order to make ends meet and provide for him and his brother.

He also expressed the pressures of having to secure a decent job after high school in order to help provide for his family as well as take care of his older brother. “They wanted me to get a good job so that I could help support the family.” When asked if he thought this was difficult, he replied, “Since he’s my brother, and since I’m his brother, I didn’t think of him as a burden.”

No one would have guessed that this mega-star had these types of struggles, but it provides others with the comfort that they are not alone. Lee Jung-jae’s open and honest heart would later give him an opportunity to take on one of the biggest projects of his life.

After countless projects, hit movies, and even starting his own entertainment agency, Artist Company, Lee Jung-jae was presented with an opportunity where he had to put all his trust in the project of Hong Dong-hyuk.

Hong, quite literally, put years of blood, sweat, and tears into making sure his project Squid Game would come to life. For ten years, despite countless rejections, he held onto a vision of how he wanted his obscure and dark script to pan out and was not willing to settle for anything less.

When he was given the life-saving opportunity to direct and produce his lifelong project, while having full creative control over it, it was a dream come true and answer to his prayers. The first actor that Hong wanted to bring onboard was none other than Lee.

Lee would play the role of the obtuse, but good intentioned Seong Ki-Hoon, also known as Player 456. People not only loved the unconventional and twisted storyline, but they also took to the character development of Ki-Hoon and how he became a kind of hero by the end of the series. Needless to say, Lee’s performance was perfection and his road to international fame was finally here.

Making History at the Emmy’s

On September 12th at the 2002 Emmy Awards, Lee Jung-jae was awarded Outstanding Lead Actor in a Drama for his performance in Squid Game. It was especially a monumental moment as he made history being the first Asian to ever win in the category.

In his acceptance speech, a visibly nervous, but grateful Lee thanked the television academy, Netflix, as well as the crew of Squid Game. He went on to say, “Thank-you to director Hwang, for making realistic problems we all face come to life so creatively on the screen.” This is quite possibly one of the main reasons for the success of the series in that it was oddly relatable for many who feel like they may have hit rock bottom.

To end of his speech, he spoke in Korean saying, “To all the Koreans watching this right now, my friends, family, and fans, I share this happiness with all of you. Thank-you.” The earnest and heartfelt way in which he expressed his gratitude evoked so many emotions. For anyone who is going through or has gone through similar struggles as Lee or even the fact that he is a minority who has achieved this unbelievable milestone, it is a moment that can provide hope and confidence to many.

And perhaps it is Lee’s real life experience dealing with the hardships of growing up without having much, but his character in Squid Game reflects similar instances. His ability to portray a character with a lot of flaws, but a lot of heart, was reflective of his own personal life and we can’t help but think he was able to connect with his character on a deeper level.

It is a lifetime of experience for Lee Jung-jae and one that many fans old and new can learn from. His resiliency during hardships and sharing his experience living with his autistic older brother has brought us closer to Lee Jung-jae in that we can relate to him and not just see him as an untouchable celebrity. Those who can understand any of his experiences, including those with his brother, would greatly appreciate his honesty and show us that we’re not alone.