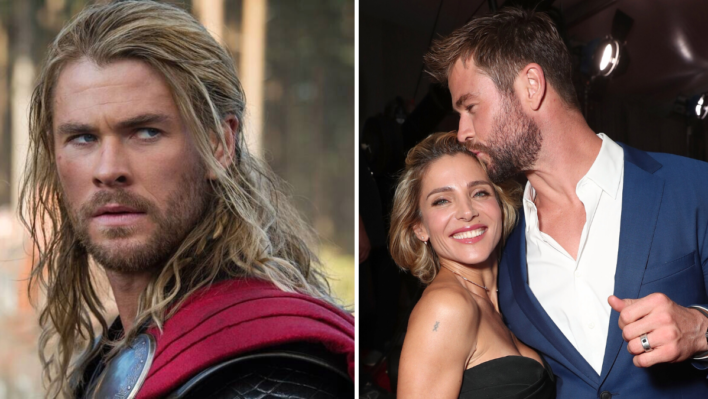 Thor dropped the news like a hammer, but with a valuable life lesson.
By Amber Dowling    November 21, 2022

Thor dropped the news like a hammer, but with a valuable life lesson.

Actor Chris Hemsworth doesn’t always open up to fans about his personal life. But in conjunction with his latest project, a NatGeo docuseries called Limitless about time and aging, the 39-year-old dropped a bombshell on fans.

In Limitless With Chris Hemsworth, the actor challenges his mind and body to extend his life. The six-part series debuted in November and leading up to the show, Hemsworth got real with fans.

In an interview with Vanity Fair, Hemsworth revealed he put himself through all kinds of tests for the show, including genetic testing, to see what the future might hold. As it turns out, he discovered he has two copies of the gene APOE4, one from his mom and one from his dad. Some studies have linked the gene to an increased risk of Alzheimer’s disease.

RELATED: Married Man With Alzheimer’s Forgets He Was Married – Falls in Love With Wife Again and Proposes to Her

According to a 2021 National Institutes of Health study, one in four people have a single copy of that gene, but only two to three percent of the population have both. Learning that was his “biggest nightmare,” Hemsworth said, alluding to the series’ fifth episode in which he reveals the findings.

“My concern was I just didn’t want to manipulate it and overdramatize it, and make it into some sort of hokey grab at empathy, or whatever, for entertainment,” he added. “It’s not like I’ve been handed my resignation.”

How Chris Hemsworth Is Taking Control of the Narrative

As far as Hemsworth is concerned, finding out he has a double set of the gene has been a blessing in disguise. Now, he says he’s taking steps to manage the risk and hopefully put off the disorder for as long as possible. He’s also extra motivated to maintain his physical and mental health.

“The show became even more relevant and important for me, even more poignant than I ever thought it would be,” he added. “It was a really good catalyst to dive into everything I needed to be doing in either the prevention front or the management front or however you want to classify it. It’s not a pre-deterministic gene, but it is a strong indication. Ten years ago, I think it was more thought of as determinant.”

RELATED: Son Drops Everything To Take Mom With Alzheimer’s On Dream Trip Around The World

Hemsworth also revealed his grandfather has Alzheimer’s, so he was already somewhat aware of the genetic risk. He also explained how, when the show’s producers found out about the results, they gave him a chance to not air it. But he felt it was important to talk about it to help others take advantage of the tests and take control of their own health.

“I was offered a version of the episode where we didn’t talk about it,” he said. “I thought, ‘No, look, if this is a motivator for people to take better care of themselves and also understand that there are steps you can take — then fantastic.’”

How Chris Hemsworth Has Decided to Make Time Count

In the interview, Hemsworth also explained how facing his own mortality motivated him to take a step back and re-evaluate what he’s doing.

He revealed that for the past decade, he’s had few opportunities to step back and revel in the amazing things he’s done because new offers and projects kept pulling him in different directions.

RELATED: Supermarket Keeps Retraining Employee Living with Alzheimer’s so She Can Continue Working

Now, he wants to focus on his family (he and his wife Elsa Pataky have three small children), and he is taking a closer look at the commitments he’s lined up.

“It really triggered something in me to want to take some time off,” he added. “And since we finished the show, I’ve been completing the things I was already contracted to do. Now when I finish this tour this week, I’m going home and I’m going to have a good chunk of time off and just simplify. Be with the kids, be with my wife.”

How Chris Hemsworth Is Learning to Appreciate the Little Things

Hemsworth chose to reveal his test results on a public platform to encourage people to get themselves tested and to help them feel empowered to take their health into their own hands. It just shows the importance of talking about illness and health to help others feel less alone.

Even more importantly, Hemsworth is taking these tests as a sign that he should slow down and enjoy the small moments in life because those are the moments that matter at the end of the day. That’s a reminder we could probably all use in our lives.

Although no one holds a crystal ball and the future is constantly changing, one thing no one regrets is spending time with family, being there for the small moments, or taking time just to enjoy life.

There will always be work and problems to solve, but remembering what matters — family, love, friendships — and doing our best to put those first is a great way to ensure we live a Limitless life with no regrets.