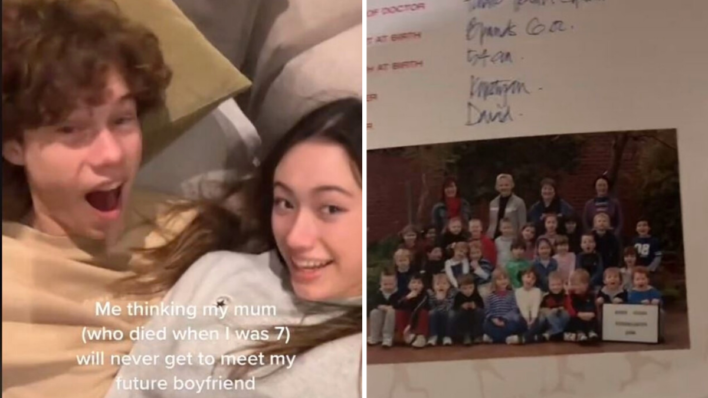 In a heartwarming moment, one woman made a surprising discovery while meeting her boyfriend’s family – and it is straight out of a rom-com.
By Amber Dowling    June 2, 2022

In a heartwarming moment, one woman made a surprising discovery while meeting her boyfriend’s family – and it is straight out of a rom-com.

When you begin dating someone you’re serious about, you want your family, friends, and everyone that you love to meet that person too. That’s why, when 18-year-old Leah Menzies began dating Thomas McLeod, she was sad her mom would never get to meet him.

Then, the couple made a jaw-dropping discovery straight from a romantic comedy.

Menzies was just seven-years-old when her mom died from liver failure. As you’d expect, there were plenty of times over the years she wished she could fill her mom in on what was going on in her life. Meeting and dating McLeod was one of them.

RELATED: “I Truly Feel It Was Fate!”- Childhood Sweethearts Find Each Other On Dating Site 30 Years Later And Get Married

“I’d met his parents and gotten to know them, and even though he knows my dad, I was always sad that he hadn’t met my mother,” Menzies, who lives in Adelaide, South Australia, told The Washington Post.

Menzies and McLeod had gone to the same high school and kind of knew each other from afar. After graduation, they got to know each other better and have now been dating for about eight months. Their relationship took a surprising turn recently when she was at his house studying.

During that study session, McLeod showed his mom his new ID card from the University of Adelaide, where both students study full-time. His mom laughed and said it reminded her of his second-grade photo. Being a mom, she insisted they dig up the old photos to have a look.

When they did, everyone got a giant shock. There, on the first page, was McLeod’s kindergarten photo. “I started freaking out and pointing to my class picture and Leah thought I was just trying to be dramatic about it,” he said. “But then she saw it and she immediately knew.”

The teacher was none other than Menzies’ mom. Until that moment, the girl knew her mom had been a teacher, but didn’t even know she taught kindergarten. As it turns out, she taught at that school for just one year in 2008. McLeod knew it was her immediately because he had seen several photos at his girlfriend’s house.

The fact that she’d actually known my future boyfriend was so incredible — I immediately started crying. It was like something out of a movie.

“Realizing my mum had been looking out for the guy who would become my boyfriend was the best surprise ever,” Menzies said.

One Woman’s Surprising Yet Heartwarming Blast from the Past

In Australia, kindergarten starts when you’re three or four years old. McLeod was three when he attended, so he has no recollection of his teacher from the time. His mom remembers her, however.

“I was a bit of a troublemaker,” he said. “I have zero memory of kindergarten, but when I showed the photo to my mom, she remembered her as a nice and caring lady,” he continued.

It’s crazy that I would be dating her daughter years later.

Menzies couldn’t wait to tell her father about the connection. Everyone was so excited they decided to make a TikTok video about it, which has since gone viral. Since Menzies posted it on May 20, it’s been seen more than 41 million times and has nearly 80,000 comments.

“I’ve heard from people all over the world, including some who found out later they went to preschool with their significant other,” Menzies added. “So I know things like this can happen.”

Why Living in the Present and Enjoying Little Moments Is Key

Found out through this photo in his photo album. A moment straight out of a movie 🥲

Some of the comments on Menzies’ post were from people who told her that her mom had sent her boyfriend to her. Or from people who believe her late mom is watching over them. The truth is, no matter what you believe about the afterlife, feeling a loved one’s presence or participation in your life following their death can be a comforting experience. That certainly seems to be one of the reasons this story went viral.

RELATED: They Were Torn Apart By Distance – 70 Years Later, They Reconnect And Get Married

However, this story of connection also reminds us to enjoy the time we have at present. Call your parents if you have the chance or put down your phone and spend some time playing or chatting with the kids. Plan a date night with your partner. Or catch up with that friend you’ve been meaning to see.

These days there are so many distractions and reasons to be busy. But we never know when our time with someone will come to an end, and as Menzies reminds us, we should always try and make the most of it while we’re here.

live in the moment
“Remember then: there is only one time that is important – Now! It is the most important time because it is the only time when we have any power.” – Leo Tolstoy