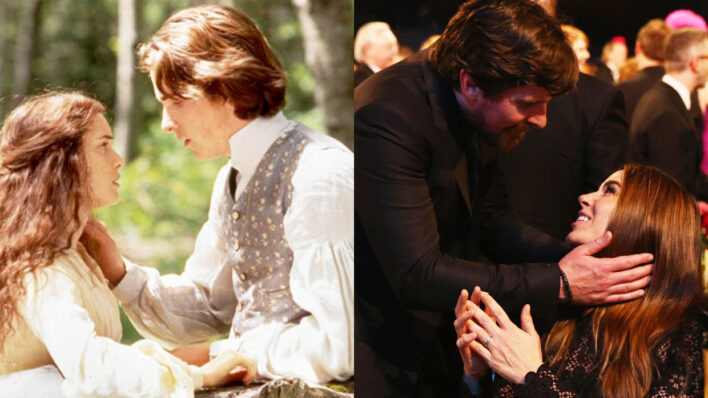 Winona Ryder Introduced Christian Bale to the Love of His Life

Christian Bale had no interest in marriage until he met his future wife Sibi when she was working as his co-star Winona Ryder’s assistant.
By Barbara Pavone    November 15, 2019

Christian Bale had no interest in marriage until he met his future wife Sibi when she was working as his co-star Winona Ryder’s assistant.

Not only is Christian Bale a talented, Oscar-winning actor, but he’s also extremely skilled at keeping his personal life top-secret and far away from prying eyes.

Bale and his wife, Sandra “Sibi” Blažić, tied the knot back in 2000 and have been inseparable ever since, which is truly rare in Hollywood. In fact, by A-list standards, two decades is almost a lifetime. So how has the couple managed to “beat the odds” and build such a long-lasting, unfaltering relationship?

The secrecy certainly plays an important role — “[My wife] likes to be very private and, of course, I want to maintain that,” Bale told Us Weekly in 2017 — but there’s much more to their successful love story than that. Let’s take a closer look at…

What we can learn Christian Bale and Sibi Blažić

How Sibi changed his stance on marriage

Before Christian Bale met Sibi Blažić, he was totally against marriage. So much so that he actually told Easy Living (via The Sydney Morning Herald) in 2012 that he had never imagined walking down the aisle. He was completely turned off by the notion… until he met the right person, that is.

“I never planned to marry,” he told the magazine, explaining,

Everyone was divorced in my family, so I didn’t have very healthy ideas about marriage. Then I met Sibi and suddenly it seemed [like] a fantastic idea.

A model and makeup artist, Blažić was working as an assistant for Bale’s friend, Winona Ryder, when they first met. They quickly became smitten and, in 2000, Bale did what he thought he never would: he eloped to Las Vegas to say “I do!”

They are proof that meeting the right person can change your outlook on life like you never imagined and shake you to your very core.

She also changed his mind about kids

In addition to turning Bale onto the idea of marriage, Blažić also changed her husband’s stance on starting a family. Her influence continued as the pair considered having kids and, in 2005, they had their first child, Emmeline. Baby Joseph arrived a decade later, in 2015.

Speaking with Esquire in 2010, the actor revealed just how passionate he had become about living life as a family man, saying, “I’ve got incredible pride for my family.”

I’ve absolutely fallen into that cliché of a dad who could just happily talk about my daughter endlessly.

Meanwhile, in a 2012 interview, he called fatherhood “the best thing ever” and admitted, “I don’t want to leave my daughter’s side for one second.”

When Bale won the 2011 Critics’ Choice award for Best Supporting Actor for his role in The Fighter, he took the opportunity to let the world know just how integral Blažić has been to his success.

“I truly believe you can’t celebrate something like this without having your partner with you,” he began before revealing the strength she’s given him.

I know that it truly would be impossible to do it without her, and she’s such a good strong woman. I owe everything to her.

In 2017, he continued that line of thought, telling Us Weekly, “She’s probably the most strong woman I’ve ever come across in my life. And I — You’re making me all tearful!” he paused, showing first-hand how his wife brings out a different side of him. “I’m too much of a softie!” he continued. “I don’t think I am, but then you got me with that!”

Not only does Bale find strength in his wife, but she also keeps up with him… and keeps him on his toes. During a Wall Street Journal profile, Bale dropped a major bombshell when he revealed that Blažić had actually worked on The Dark Knight Rises with him as a stunt double.

He noted, “She was driving one of the cop cars. She can do 180s and stunts and all that.” He went on to say, “She terrifies me. My wife terrifies me.” In the best way possible, of course.

Jump to his Golden Globe win for Best Actor for Vice in 2019 and, once again, Bale couldn’t help but thank his partner. “Thank you to my beautiful wife […] I wouldn’t be working without her,” he confessed before revealing just how much his family has changed him. He added, “And thank you for our beautiful children, Banana and Burrito. They’ve given me a love and a soul I never thought possible.”

Don’t be afraid of how love will change you

January 2020 marks the couple’s landmark two-decade wedding anniversary and if there’s one thing that proves it’s that no matter what your preconceived notions may be about relationships, marriage or children, they can all change on a dime when you meet the right person.

Allowing someone into your life who challenges your beliefs, brings out the best in you, and even “terrifies you” can be the best decision you ever make. As Bale has learned first-hand, stepping outside of your comfort zone in life, love and work is a surefire recipe for happiness and success.