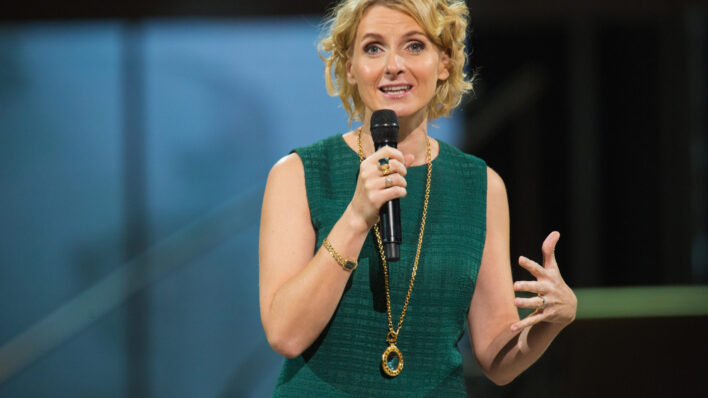 4 Lessons on Believing in Yourself from Elizabeth Gilbert, Author of Eat, Pray, Love

Since her international bestseller, Eat, Pray, Love, Elizabeth Gilbert has become revered for her wisdom and the eloquence with which
By Matt Valentine    August 21, 2018

Since her international bestseller, Eat, Pray, Love, Elizabeth Gilbert has become revered for her wisdom and the eloquence with which

Since her international bestseller, Eat, Pray, Love, Elizabeth Gilbert has become revered for her wisdom and the eloquence with which she expresses those ideas in her novels. However, I was first introduced to Gilbert through her TED talk on creativity years later, a talk which changed the way I looked at my work as a writer and a creative in general.

Throughout her novels, non-fiction books, and lectures, certain central themes such as the courage to face fear and pursue curiosity — and the magic that can happen when we do that (Big Magic, specifically) — have risen to the surface.

Gilbert has a lot to say about believing in yourself and dancing with fear, lessons which anyone can take with them to live a more fulfilling life — lessons I hope can be as much value to you as they have been to me.

If life gives you lemons, don’t settle for simply making lemonade – make a glorious scene at a lemonade stand.

Here are four lessons on believing in yourself, and so much more, from Elizabeth Gilbert:

Most of us think we have to conquer fear, to become fearless and hardened so that we can weather any storm that comes our way.

However, it’s a grave misconception that this is even possible.

Those courageous and brave among us aren’t fearless, they dance with fear and learn to be with it, to move through it, without it paralyzing them.

Fear has a real biological purpose — and an incredibly important one at that. When you’re in a bad part of town, it’s fear that reminds you of this and tells you to get moving, And when you’re on that camping trip, it’s fear that tells you to run at the sound of a distant rattling from your friendly neighborhood rattlesnake.

Gilbert says she’s learned to thank fear and treat it as a friend who is looking out for her best interests. However, one which can sometimes be a little too protective, and therefore must be put in its place.

“We owe our fear our lives. Start by saying ‘thank you, I appreciate all the ways you’ve saved my life. (But right now I don’t need you; I’m just trying to write poetry!).’ Create an ongoing friendship with fear,” Gilbert recently told Psychologies magazine.

2. Don’t wait for a guarantee – the journey has its own gifts It’s natural to want to know for certain that our efforts are going to be fruitful. After all, we don’t want to spend years working on something that just doesn’t work out.

However, I’ve found that anyone who believes this hasn’t yet worked on accomplishing something great over any real length of time. If they had, they’d know that the journey itself offers infinite gifts far more valuable than the money or accolades you originally set out to acquire.

“If you want to know how the adventure ends, you’re never going to start it. ‘But what if I go on an adventure and find nothing?’ people ask. Show me when that ever happens. Please bring me the person who went on a sincere and open-hearted search and found nothing out about themselves,” says Gilbert.

3. Differentiate between quitting vs. surrendering There’s a difference between quitting and surrendering and knowing that difference is important.

One, it’s important to know that sometimes when it appears you’re quitting, to not kick yourself and believe that you’ve given up. Sometimes, surrendering is smart and the most natural thing to do. That doesn’t mean you’re not good enough or that you’re giving up. In fact, it’s a sign of wisdom.

She says that, while quitting makes us feel shameful and defeated, surrendering at the right moment is actually empowering and offers us a great, rare moment of freedom.

At some point in your life, if it hasn’t happened already, something isn’t going to work out like you planned it.

You’re going to build a business and it’s going to fail, have dreams of getting into a particular school and not get accepted, or want to get a publishing deal for your novel and get rejected a dozen times.

But if you quit now, what will the rest of your life be? A dark, defeated trudge through the mud of daily life without any hope or possibility of joy or fulfillment? You’re better than that and you know it.

So, never stop showing up and start looking to the journey as the real treasure from it all.

If you can have happy moments, you’re not done yet. Keep showing up. There’s no success more meaningful than being a curious and engaged human being.

More inspiration to help you believe in yourself: