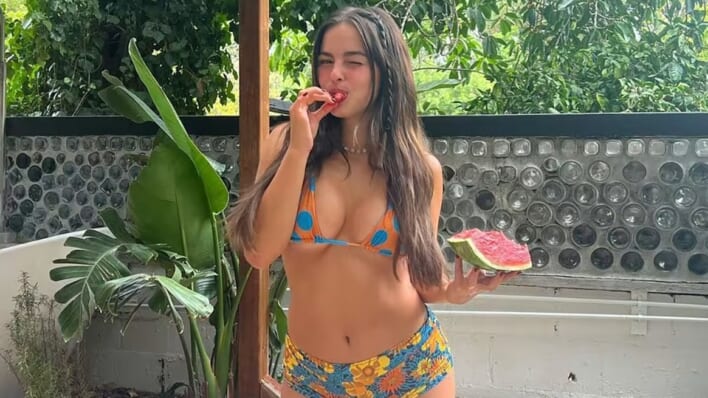 Addison Rae’s ‘Holy Trinity Bikini’ Pic Was Controversial – Was She Right to Remove It?

TikTok queen Addison Rae is no stranger to risqué bikini pics, and yet one of her more recent ones has stirred up a rather notable controversy. The 21-year-old actress and TikTok celeb—who, by the way, is the fourth most-followed individual on the platform—has over 88 million followers, so maybe that has something to do with the diversity of reactions to her fashion forward freedom.

Brass tacks: Rae shared a photo of herself wearing one of Praying’s “Holy Trinity” bikinis—a now famous collaboration with Adidas. The $100 string bikini displayed in Addison Rae’s Instagram post is all white (pure, one might say), and has the words “Father” and “Son” written across each side of the bra, and the words “Holy Spirit” typed neatly across the front of the panties.

For the uninitiated, the suit references the Christian Holy Trinity, AKA the father (God), the son (Jesus) and the Holy Spirit.

Unsurprisingly—or surprisingly, depending who you talk to—this scanty bathing suit has caused quite an uproar.

Who Is Addison Rae?

Before moving to LA to pursue her social media career, Rae briefly attended Louisiana State University but dropped out when she started gaining popularity on TikTok. It all started in 2019 when she actively began to post her dance videos, which quickly drew attention (she started dancing competitively at the age of six).

RELATED: These Celebrities Have a ‘Weird’ Approach to Social Media – And It Might Save Your Life

In addition to being an impressively high profile social media personality, in August 2020, Forbes named Rae the highest-earning TikTok personality. And in 2021, she made the Forbes “30 Under 30” list for social media influencers.

While some of her fans loved the now-deleted Instagram photo, many others accused her of “blasphemy.”  One person shared a screenshot of Addison’s photo on Twitter, writing, “i wonder what christians think about addison rae’s post. the underwear says ‘holy spirit’. is this not blasphemy?”

“Nah this disrespectful to Jesus. Sad what y’all do for money,” another posted.

Still another asked, “Is nobody going to talk about this disrespecting religions?”

“The brand @praying___ is blatantly mocking and disrespecting Christianity. This is unacceptable!!” yet another offended fan tweeted.

Instagram influencer Brittany Dawn Davis even posted a video on Instagram in response to Rae’s photo, saying, “To Addison Rae, if you see this, I’m not here to cancel you. As a Christian, I am here to pray for you, to intercede for you, to believe that the Lord is pursuing your heart just like he pursued mine three years ago.”

In spite of the seemingly endless torrent of people decrying the disrespect of religion, with some even hoping to save Rae’s soul, however, a number of Twitter users defended her post, with one fan saying, “…I’m a Christian and not offended by it at all … others seem to be scared of a woman’s body.”

And then there are those who are downright appalled that Rae has gotten so much flak. “Why are we all acting like Addison Rae is the first person to wear that bikini?”

Praying has amassed an uber Gen Z following with a taste for 2000s nostalgia. It’s a popular brand, worn by A-listers like Olivia Rodrigo, Halsey, and Madison Beer, who have all been spotted wearing various pieces.

Seemingly No Remorse From the Company Praying

Although Rae ultimately chose to delete her post, her photo has since been reposted on Twitter by Addison Rae fan accounts, where the backlash continued to unfurl.

As of yet, neither Addison Rae, Praying, nor Adidas have commented, but less than a week after the whole debacle, Rae was donning a ‘GOD’S FAVORITE’ bag, another hot ticket item by Praying. And in spite of being flooded with DMs asking them to remove the bathing suit, the bikini is still available for purchase on the brand’s site.

RELATED: TikTok Star Gives $20K of OnlyFans Money to His Sister for the Sweetest Reason – And in the Weirdest Way

Since the outcry, Praying has also shared another image of a model wearing the Holy Trinity Bikini with her head and hands in a pillory, captioning it with The Smiths’ lyric: “Now I know how Joan of Arc felt.”

Freedom of Expression Versus Cancel Culture Versus God?

Let’s stick with the image of Joan of Arc for a moment, shall we? Joan is a patron saint, honored as a defender and savior of France for her role as a military leader who transcended gender roles. In 1431, she was put on trial for heresy and accused of having blasphemed by wearing men’s clothes, acting upon demonic visions, and refusing to submit her words and deeds to the church—because she insisted that only God could judge her. She was executed by fire at the tender age of 19.

RELATED: The Toxic Relationship That Made Millie Bobby Brown Quit TikTok – And How She Rose Above It

Now, while there’s hardly a comparison to be drawn between Praying’s bikini models living as they do in a context of social media cancel culture, and Joan of Arc, society does still love telling women what they should and shouldn’t use to cover their bodies. That much has stayed the same. And religious authorities, be they Christian or otherwise, have often had more to say about what women should and shouldn’t do with their bodies than anyone else.

Whether one is religious or not, a Christian or not, and offended by the Holy Trinity bikini or not, it’s worth giving a thought to why this particular subversion of religious terminology feels problematic to so many, and, indeed, why so many feel it’s within their rights to play judge. Some would say that’s God’s job.

“All I’m praying for right now,” posted one fan, “is that this controversy blows over soon so Addison can get back to the important stuff—teaching us how to “Woah” on TikTok.”

What Gabbie Hanna’s TikToks Show Us About Compassion and Accountability