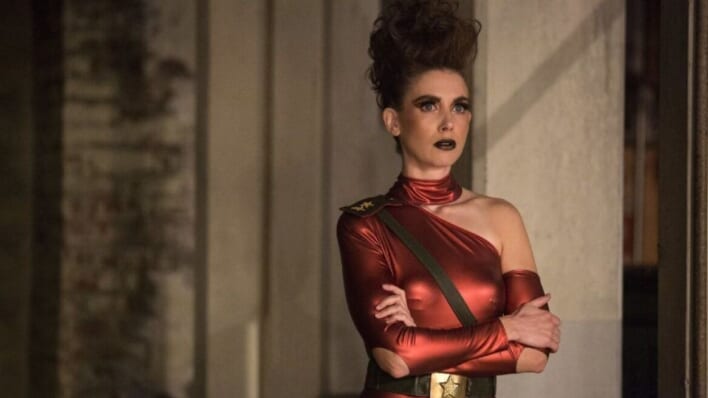 With the cancellation of her Netflix series GLOW on the eve of its fourth season, Alison Brie took it all calmly and moved on to even more satisfying projects.
By Laurence Lerman    August 30, 2022

With the cancellation of her Netflix series GLOW on the eve of its fourth season, Alison Brie took it all calmly and moved on to even more satisfying projects.

While recently promoting one of her latest projects, the film comedy Spin Me Round, Alison Brie came clean about her feelings regarding the end of her Netflix series GLOW, in which she starred. The popular show revolved around the 1980’s syndicated women’s wrestling circuit known as Gorgeous Ladies of Wrestling (or GLOW).

Back in September, 2019—which truly feels like a lifetime ago in the post-COVID world—Netflix announced that GLOW was being picked up for a fourth and final season. As the series had earned 18 Emmy Nominations and a trio of wins over the course of its relatively short run, the decision to move forward was not an unpredictable one.

Alison Hung Up Her Leotard After GLOW’s Third Season

But an unpleasant surprise came a little more than a year later in November, 2020 when Netflix reversed its decision and canceled the series, citing the pandemic as the reason. That GLOW featured a large ensemble cast that engage in numerous very physical wrestling sequences, the decision to cancel the show, or at least put it on hiatus, was not irrational. But it was a disappointing one (particularly when it was made clear that it was a permanent cancellation), mostly for the show’s energetic creators, cast and crew, led by its leading lady.

“It’s the great heartbreak of my career,” Brie admitted when recently asked about the demise of the show, which also starred Betty Gilpin and Marc Maron. “But it will forever live on as, like, this great thing. I loved working on it — maybe more than anything I’ve worked on — and I miss it a lot. But I feel very grateful for the time I had on the show.”

RELATED: 5 Effective, Professional Ways to Express Gratitude in the Workplace

At the time of GLOW’s cancellation, Alison was relatively quiet about the news. A month after the announcement, she did make mention of it and how a possibility of a future for GLOW wouldn’t really be realistic at the time.

“I think a GLOW movie could tie everything up. Our creators, Liz Flahive and Carly Mensch, are incredible writers and they’re so devoted to these characters that they created. I think a movie would be a great way to wrap it up,” she said on The Fourth Wall podcast. “I’m a little pessimistic about it actually happening just in light of everything that’s gone on this year and how difficult it is to get anything back into production with COVID.”

Other TV and Movie Projects Beckoned to Alison

Alison stayed on the down-low immediately following the cancellation, wisely waiting for a time to let her personal feelings be known following a period of time when there were much bigger problems to deal with.

Not that Alison hasn’t remained quite busy in the past two years. She has since starred in the quirky psychological drama Horse Girl and the horror-mystery The Rental, the latter being co-written and directed by her husband Dave Franco. She also had a juicy role in the much-lauded Promising Young Woman, which was released only a few months following the GLOW cancellation.

RELATED:  Leslie Grace’s Response to Batgirl’s Cancelation Is an Important Reminder about Disappointment and Dignity

Further, Alison slipped back into TV mode for a handful of voiceover gigs, including an installment of the animated comedy-adventure series Rick and Morty, which was co-created by Dan Harmon, mastermind of the beloved comedy Community, in which she was featured.

This was all a lead-up to the just-released offbeat comedy Spin Me Round, where Alison portrays a chain Italian restaurant employee who wins a trip to the eatery’s headquarters outside Florence, Italy. Upon arriving and meeting the company’s CEO and staff, she slowly realizes that her adventure isn’t actually as pleasing as it is predatory.

Alison’s Latest Is the Just-Released Comedy Spin Me Round

Along with starring in the Spin Me Round, Alison served as co-producer and co-writer, alongside director Jeff Baena, with whom she also co-wrote and co-produced Horse Girl.

“That was such a good experience. And then, Jeff came to me and said, ‘Well, I have this idea that I’ve been thinking about for a long time,’” Alison said of the film and her first two writing credits. “That led to this Spin Me Round. It’s all been a pretty organic evolution.”

Don’t count TV out for the always-game Alison. Though recent years have seen her making waves on the big screen—she was featured in the high-profile The Disaster Artist and Steven Spielberg’s The Post opposite Meryl Streep several years back—the actress who’s still best known for her TV work in such acclaimed shows as Mad Men, Community and GLOW is always open to a fresh and challenging gig on the small screen.

“I would love to do another TV show. I love working in TV. I love the format of it. I watch a ton of TV. I love getting to spend years with a character and watch the ways in which they evolve, and creating a relationship with an audience,” said Brie, whose very first professional booking was on a 2006 episode of TV’s Hannah Montana.

“I’m certainly looking for the next show right now, and I’m developing some projects, so we’ll see what happens with those.”

Alison Will Always Remain Grateful for her Time on GLOW

As for GLOW, Alison remains grateful for the show and the memories she takes with her. Her poise and professionalism—she was essentially quiet when GLOW was canceled—and seamless moving forward to other challenging and enriching projects is to be applauded! To wallow and create unnecessary noise and stress over matters you can’t control can only be detrimental to your professional and physical health in the long run. With a little time and distance, one can look back fondly and remember the good times

Looking back on the cancellation now, as the pandemic continues to take its toll around the world, Brie recognizes that there were much more important things to worry about at the time.

“Yeah, it was surprising! But it was sort of eclipsed by the shock of everything that was happening globally,” she said. “So in a way, it was almost like it put things in perspective.”