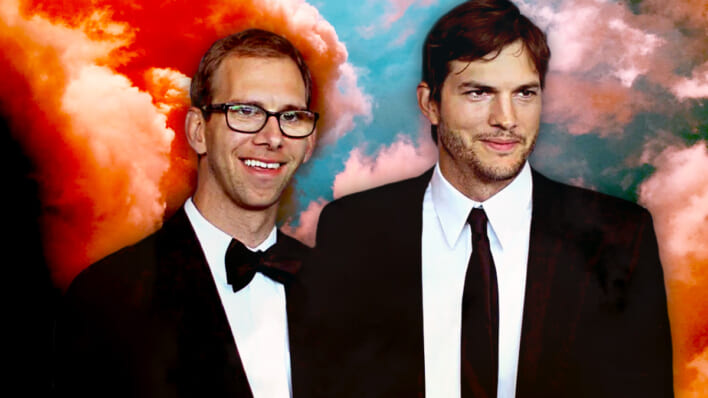 Ashton Kutcher’s twin brother Michael is a source of inspiration and empathy in the actor’s life.
By Amy Lamare    July 18, 2022

Ashton Kutcher’s twin brother Michael is a source of inspiration and empathy in the actor’s life.

Ashton Kutcher has been a beloved actor since his days playing Michael Kelso for eight seasons on the hit Fox sitcom That 70s Show. He also stepped in and saved CBS’ Two and a Half Men after Charlie Sheen had his now infamous #winning and #tigerblood meltdown. Ashton played billionaire Walden Schmidt for the final four seasons of the long-running show, and appeared in a number of movies, as a guest star on several television shows, and famously married his That 70s Show co-star (and onscreen girlfriend) Mila Kunis.

RELATED: Ashton Kutcher: Having A Child Is The Greatest Opportunity Of My Life

However, long before Kutcher was a successful and popular actor, he was a boy from Cedar Rapids, Iowa. On February 7, 1978, two boys were born to Diane and Larry Kutcher. Christopher Ashton and Michael Kutcher joined older sister Tausha to complete the family.

However, Michael was born with cerebral palsy and needed a heart transplant as a child. Ashton was inspired to find a way to cure his brother and hoped to become a biomedical engineer to help find a cure for the disease. But fate had different plans. What could have been a sad story became one of inspiration and the surprising way Michael taught his twin brother to be more empathetic.

Ashton weighed almost 11 pounds at birth. Michael was born nearly five minutes later and weighed just four pounds. in an interview with Today, he explained his lungs were underdeveloped and he was not breathing when he was born. He was diagnosed with cerebral palsy when he was three. “My mom noticed I was having developmental difficulties and not advancing like my twin was,” he said. “So she began taking me to doctors.”

Michael also had a heart condition called cardiomyopathy which required him to have a heart transplant when he was a teenager. His health issues caused stress in the Kutcher home and the tension made homelife uneasy for Ashton, as he was frequently met with bad news when he got home from school.

Ashton kept himself so busy he didn’t have time to feel the fear and emotions he lived with every day. The stressful period also took a toll on Ashton and Michael’s parents, and they divorced when the twins were 16.

Ashton developed his passion for acting while appearing in high school plays. He also got into some trouble. During his senior year, he and his cousin broke into their high school in the middle of the night to steal money. Ashton was apprehended and arrested leaving the scene of the crime. He was convicted of third-degree burglary and sentenced to three years of probation and 180 hours of community service. As a result of this youthful crime, Ashton lost his college scholarships.

In the fall of 1996, Ashton enrolled at the University of Iowa. He planned to study biochemical engineering so that he could attempt to cure Michael’s heart disease. At the time, Ashton was also just a typical college student who liked to party. He liked to party so much that he was evicted from his apartment for being too loud and wild. Since Ashton lost his scholarships after the burglary incident, he had to work to pay his tuition. He worked in the cereal department of the General Mills factory in Cedar Rapids. His job was to sweep cereal off the factory floor.  Like many college students, he sold his blood plasma for cash once in a while.

RELATED: Relationship Goals: Ashton Kutcher and Mila Kunis Prove That Timing is Everything

A model scout approached Ashton in a bar while he was a student at the  University of Iowa and encouraged him to enter a modeling contest called “Fresh Faces of Iowa.” He finished the competition in first place and received a trip to a modeling convention in New York City. That experience was pivotal in young Ashton’s life.

He returned to Cedar Rapids and the University of Iowa for a little bit afterward but it wasn’t long before he decided to drop out of college and move to Los Angeles to pursue a career in acting. His very first audition was for That 70s Show. The rest is history.

Ashton Kutcher and His Twin Brother Michael Are Best Friends

Growing up with a disability is hard. It was even harder in the 1980s and Michael was often bullied by other kids. But he had his twin to protect him. In an interview with Details, Michael said, “I was the kid with the big Coke-bottle glasses, the hearing aid. There was a lot of teasing, a lot of the normal mean stuff.”

RELATED: Ashton Kutcher: Having A Child Is The Greatest Opportunity Of My Life

In his Today interview, Michael spoke about one afternoon when he and his brother were riding their bikes and a bunch of neighborhood bullies started calling him the R-word and ridiculing his thick eyeglasses. Michael said. “My brother picked a fight with them. He stood up for me. He wanted them to treat me with respect. And that meant a lot.”

Michael also revealed that Ashton would not go to a sleepover or party unless Michael was also invited. Most of the time, it wasn’t an issue but on the occasions when Michael wasn’t allowed to attend, Ashton stayed home with his brother.

Michael Was Angry When Ashton Publicly Revealed His Disease

During an interview on Today in May 2021, Michael Kutcher revealed that when Ashton publicly spoke about his twin’s cerebral palsy in a 2003 interview it was without his permission. “I was very angry. Very angry. I remember speaking to him about it. I didn’t want to be the face of CP. I never talked about it.”

Michael didn’t stay angry for long. He’s now grateful Ashton revealed his disease to the world as it changed his life it allowed him to be himself. Not long after his twin’s 2003 interview, Michael got a call from a woman asking him if he’d speak at a gala about living with cerebral palsy. He wasn’t sure, so he met the woman for coffee. She had her daughter Bella with her. At five years old, Bella had a much more severe case of cerebral palsy than Michael has.

RELATED: The One Lesson We Can Learn From Demi Moore’s Divorce From Ashton Kutcher

That meeting made Michael realize he had to let go of the shame he felt. He realized he could be a “…champion for people like Bella…I was finally ready to tell my story and I knew because of my twin, I’d have a big reach.”

Today, Michael is a spokesperson for the Cerebral Palsy Foundation. He also advises the app Joshin, which helps families find care for people with disabilities.

Ashton commented on his brother’s Today show interview, saying, “My brother’s daily actions remind me that life isn’t about running around challenges — it’s about running through them. Mike has a relentless work ethic and a deep compassion for others.” Traits we could all learn from.